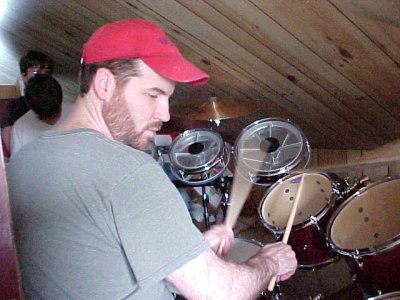 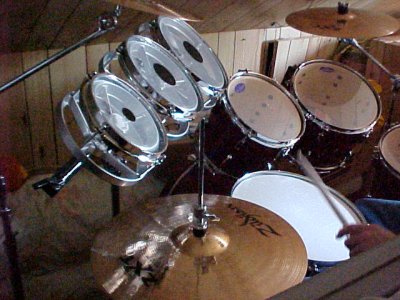 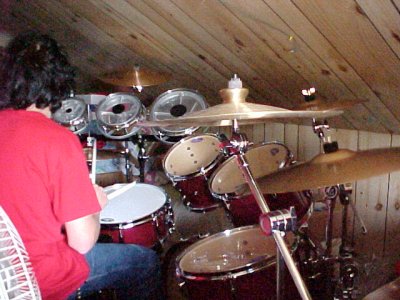 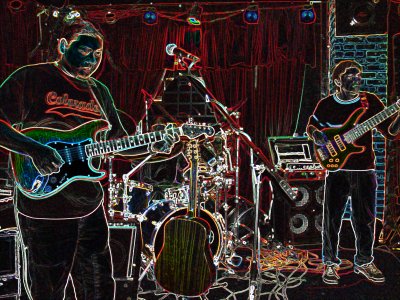 THIS PAST TUESDAY, April 29, the Danny Godinez Band played the Pattenburg House. Danny, Todd, Farko and Joe Raven were back, filling that smoky little place with quality music much deserving of a larger venue. Since October, I had been anticipating their next East Coast tour. I was not disappointed by their show or by their friendship.

These boys are excellent musicians, top notch. Guitar work that is smooth, rich and versatile. Drumming that spares no talent and remains powerful and controlled from start to finish. Piano sounds that put their arms around you and lift you off your seat. Bass work that is astounding. It all blends together in their own unique sound. When you hear the Danny Godinez Band you know it is them.

Truly, they deserved a much larger crowd than the one that turned out on Tuesday. Tuesday night and rural Hunterdon County, New Jersey are not the proper combination to produce a thronging audience. A Friday or Saturday night would have been better. Even then, I think this band is worthy of greater exposure than the Pattenburg can offer. Here we were, a stone’s throw from New York City and all those people were missing the show. It was almost an insult to the band that there was only a four dollar cover charge that night. These guys drove across the country from Seattle in order to share their music with people. We need to provide more people to hear it next time.

ANOTHER quality about this band is their personalities. Each of them is friendly. They are eager to play their music and just as eager to mingle with the crowd. They have a way of turning spectators into participants, fans into friends.

I appreciate this aspect of the band’s interaction with the audience. I met them at the Pattenburg in October and drove to Connecticut to see them the following night. I’ve exchanged a few emails with some of the band members in the intervening months. When I arrived at the show an hour late on Tuesday, it was good to hear that they had been asking for me before I got there. During one of the breaks, one of the guys and I had a great conversation. It wasn’t just a bar conversation about the girls who dumped us or the cars that broke down that week. It was a talk that friends engage in, the kind that leaves you with an interest in the other person’s struggles and aspirations. It culminated in an open invite to hang out in Seattle. You can be sure that I will take up that offer.

I’m a fan. I’m a friend. I’m a promoter. Go see this band when they come around! They are worth it! Read more about them in one of my earlier entries HERE.

Dropping Fiorinal at the Laser Show

I regret to inform you that last night’s laser show absolutely SUCKED!

Hard to believe that the spoof on economics below holds more promise of reality than my former anticipation of the laser show does. But alas, it is so! At first, I speculated that my preference for economics over rock-n-roll and laser enduced psychedelia was a sure sign that I had indeed crossed that line and had become officially OLD. They say that the memory is the first thing to go. But no! It is the COOLNESS that one loses! Long before a man forgets where he placed his keys when they are still in his hand or loses control over his bowels, his control over his own coolness slips from his grip. He trades his Mad Magazines in for the Wall Street Journal. No longer does he find his heroes on the cover of Rolling Stone Magazine. Instead, his icons and gurus cast their spell over his feeble mind from the cover of Fortune Magazine.

However, upon further inspection I was relieved of the notion of having achieved oldness. Even my fifteen-year-old son concurred with the suckiness of the show. And my cousin was almost out of control due to the laser assault. Yes! I think she was ready to vomit from the motion of the stars and laser designs flying across the ceiling, not to mention the corniness of the announcer during the show. She taunted me to get up front and do the moonwalk. She raised her arms and sang “coo-coo-ca-choo” along with the Beatles. She clapped out of rhythm with the Beach Boys, messing up the entire audience, all 14 of us.

Okay. In fairness, I admit that the moonwalk idea was my own. I had my arms up too. Yes, I did the out-of-synch “Little Deuce Coop” clap too. But I had an excuse. I was under the influence of fiorinal, my migraine medicine. Yes, I was “Comfortably Numb,” waiting for the Pink Floyd show. Even without the lasers the room was spinning for me.

In days long ago, people used to drop acid or smoke pot when they listened to Pink Floyd. And now… Perhaps the issue in all of this is that I have crossed that line and am now old. I dropped migraine medicine in order to listen to Floyd! Fiorinal. Truth be told, fiorinal is just a “turbo” caffiene pill. It’s loaded with caffiene and just wires me out when I have to use it. “Fiorinal.” Sounds quite poetically related to “urinal.” I think it is an intentional relation because when you have a migraine you really don’t feel well enough to care if you’re pissed on, pissed off or just plain pissed.

The only thing worse than a migraine is a migraine accompanied by a Raritan Valley laser show.

Now back to the psychodelia of finishing my economics paper…

Here’s a song for you. One of my current favorites. It’s half good ideas, half tongue-in-cheek. I like it all except for the part of changing her name from Kitty to Karen. I understand that the name had to rhyme with Chrysler LeBaron. But how about changing her name to Doris and trading in the MG for a Ford Taurus?

Regardless, it’s a funky tune.

I want a girl with the right allocations
Who’s fast, thorough, and sharp as a tack
She’s playing with her jewelry
She’s putting up her hair
She’s touring the facilities
And picking up the slack

I want a girl with a short skirt and a long jacket.

With fingernails that shine like justice
And a voice that is dark like tainted glass
She is fast, thorough, and sharp as a tack
She’s touring the facilities and picking up the slack

I want a girl with a short skirt and a long, long jacket

by CAKE
from the album Comfort Eagle 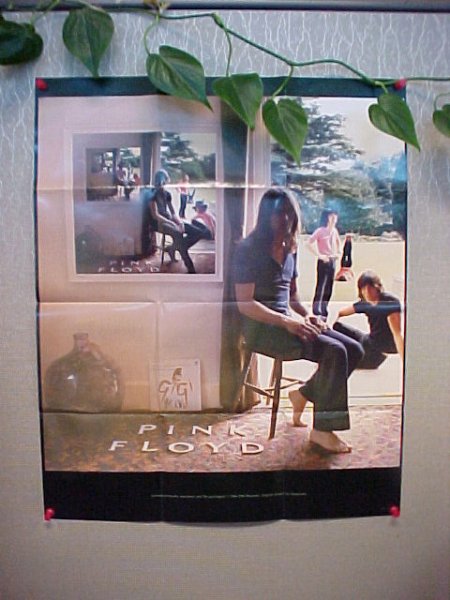 I got a Pink Floyd poster!

Noticing that I was starting to overdose on CNN’s and NPR’s war in Iraq coverage, I decided to go buy some new music last night. I needed something fresh and new. What better music to cure an overdose than Pink Floyd? (?)

I got a remastered CD version of their 1969 “Ummagumma.” I had forgotten all about this album. After listening to it, I bet most people have forgotten about it! But how can you not buy a CD that has a song title on it like this: “Several Species of Small Furry Animals Gathered Together in a Cave and Grooving with a Pict?” If that won’t distract you from war nothing will!

Okay. Here’s the funny part. When I opened the CD there was a poster inside. This caused an instant flashback to the age of 15. Back then I had tried to steal a poster out of Pink Floyd’s “Dark Side of the Moon” album. I had the cassette. But cassettes didn’t come with posters. There was a girl in the aisle as I slit the plastic album wrapping and dropped the poster in a bag I was carrying. She looked like a stoner, so I didn’t worry about her. Well, she was undercover security and I got busted for ripping off a poster! Nothing ever came of the incident. And I did reform my ways. I don’t think I’ve tried to steal any Pink Floyd paraphernalia since then. But all these years I’ve had to endure life without a Pink Floyd poster. Now I have one. Maybe my karma is improving. Maybe the experiences of my life since 15 have been sufficient punishment and the recording industry gods now deem me worthy of a poster. Or maybe is just further proof that CDs are a huge improvement over cassettes.

The poster hangs proudly… in my cube at work. Not exactly where I would have placed it at 15.