THIS IS REAL… AND IT’S GONNA HURT

You know? I just can’t stay away.

I dismantled my online journal in August. The two main reasons: 1. I needed to be a little less visible to some people, specifically a trouble-making co-worker. 2. I wanted to focus on writing better. Having an online journal was making me careless and sloppy as a writer. So, I took it all down and for the past three months have been going through all the old articles I wrote since December 2000. I pulled out a few good ones and started rewriting them. Taken out of context, online journal entries can sound a bit weird. I began rewriting to make them stand alone essays based on the experiences of my life. All well and good.

However, I have found that I haven’t been writing anything NEW. Am I a writer? Or just a re-writer? Have I merely become an editor? I need to write! Too many things go on in my life. I need to tell somebody about it. My private journals are fine to sort through all the garbage in my head. And I suppose that one day someone will read those when I’m dead and gone. (Although, someone was reading them and I didn’t know it, which seriously contributed to the death of our relationship. More on that sometime.) But I need a venue for putting my writing out there for people to read and give me some feedback.

It’s more than just about writing I’ve realized. I am also missing the interaction of the online community. The feedback from readers and other journalists is a benefit that I threw out with the bathwater so to speak. There is value to that interaction, not just as a writer, but as a person. There are friends that the internet has brought into my life with whom I do not have direct, face-to-face interaction but who have been a tremendous support to me many times over the past several years. We still have email interactions. But I think I need to have the give and take of a journal again to broaden those relationships to the breadth they once had.

So, here it is. Crash Test Monkey. It’s real… and it’s gonna hurt! It’s me… incognito… dressed up like a monkey. No dot com name of my own. I’m hiding out with all the other monkeys on Diary Land. I’m already on my second rum and coke. You know how I like my rum! And drinking while writing sometimes enables a guy to express himself in free and unbounded ways. For example, without a few drinks behind me, I would never tell you that when I was eight years old I got in trouble for picking my nose and wiping the boogers on the wall by my bed. Without the influence of alcohol, I would NEVER admit that I was once eight years old! See? This online journal gig is good for us all! Uplifting and inspiring! I’ve selected several readers from my former email list to let you know about this journal, people I feel I can trust. We’ll start here and see what happens. Names and actual places may be altered along the way. But you will know who the man is behind the curtain.

Now… back to the rum! 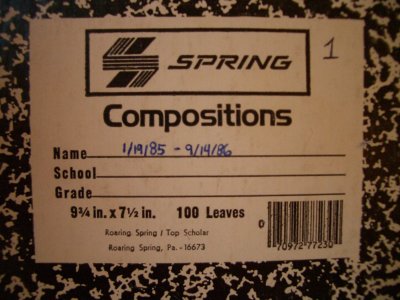 I have begun a massive project of typing my hand-written private journals. Currently, there are 19 volumes!

Seeing as my handwriting is so poor, I thought it might be best to take on this project. I always tell my children that one day they will be allowed to read these journals. The poor things! They won’t be able to decipher most of what is written! It’s awful! I had to laugh yesterday when my son, Tim, was writing something on the back of a business card while we were in the car. He looked at me apologetically and said, “It’s a little messy because the car is bumpy.” I said, “Dude! THAT looks a hundred times better than the way I normally write when I’m sitting still at a desk!”

So far, I have typed 17 pages in Word. That covers 38 hand-written pages in this old composition book with pages falling out that I call “Volume 1”. That’s not quite one-fifth of the notebook. I expect the Word files for each volume to average close to 100 pages. So, for the next several years, I will be sequestered away like a medieval monk transcribing Latin with quill and ink. Only Latin is probably easier to understand than my handwriting!

My writing experience sort of “morphed” into personal journal keeping by chance. At the start, volume 1 was a collection of devotional thoughts that I, as a Christian, wrote down as I contemplated various portions of the Bible. (Yes, I am the same guy that wrote all the raunchy swear words in the last entry on this website. Yes, that may be an indication of how my heart has declined since 1985. Actually, it peaked and then declined.) After several pages of these devotional writings, volume 1 suddenly becomes a personal journal. My writing style changed due to a book that I read called “Sandy, A Heart for God” by Leighton Ford. Leighton’s son, Sandy, was a Christian who kept a diary. He died at the age of 21 while undergoing surgery for a rare heart condition. I began my journal at age 21. After reading about Sandy, I decided to use my journal to capture my thoughts, emotions, experiences, etc.

As I’ve been working my way through Volume 1 over the last two days, I am confronted by differing emotions. At some points I am embarrassed by what I wrote. Some of it seems immature, presumptuous, self-inflated, 21-ish”. Some of the memories of that period in my life that have come back to me are good. I think of how Joel was only 9 months old, not even walking yet. I remember some of the friends from that period and smile. Some other memories, especially of my first marriage, make me happy that I am now 21 years removed from that time. Some of these memories are tainted due to circumstances that have transpired between then and now.

There is one person mentioned near the start of the journal of whom I had to make a note. His name was Joe. We worked together on the road department in Washington, NJ. His father was the head supervisor of the department. Back in those days, Joe was a rowdy pot-smoking guy. I was a Christian. While I often talked about Bible related topics with some of the guys on the crew, usually because they brought the subject up, Joe was a constant source of temptation and instigation. I distinctly remember one time, at the town dump where we disposed of residents’ lawn clippings and leaves, Joe decided to light up a big ol’ joint and get high. I said nothing and intended to say nothing. I minded my own business. One of the other guys said, “Hey Joe, what if Preacher Boy (me) tells your dad?” Joe didn’t know that I could hear his response when he said, “If he does, I’ll hit him in the head with a shovel!”

Joe didn’t stay on the job very long. Then I didn’t see him for several years. By the time I did see him again, I had three kids, was divorced, and about to be married again. I was surprised to see Joe under the circumstances. We were at a multiple church baptismal service along the Delaware River in Pennsylvania. Suddenly, in the midst of that crowd, before the service started, I bumped into Joe! I was so surprised that I blurted out, “Joe! What are YOU doing HERE????” Joe smiled and said, “Brother, I’m getting baptized today. My life is completely different.” Wow!

I saw Joe a few years ago in a local mall. He was married and had a child. By then, my spiritual situation had declined. I was a rebel. I had been through too much heartache. The amazing new Joe said, “Brother, Jesus still loves you and you can give me a call anytime.”

Funny how life goes. So much history has happened between Volume 1 and Volume 19! Reading Volume 1 now, I find myself thinking that it couldn’t have been me who wrote some of the entries. Did I really think in those ways? Did I really let such seemingly petty events upset me so? Where did many of those inward struggles go? Did I win them? Did I give up the struggles? Did I merely grow out of them?

How will Volume 19 look to me 21 years from now when I’m on Volume 38? Stick around. When we get that far, I’ll write about it on the website.