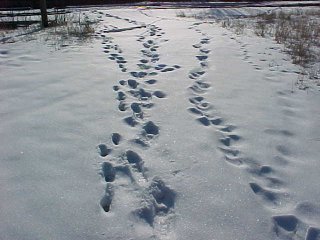 THE MOON rose full this evening. Venus watched from the southwest. The sky was clear. The air was cold. It is January. But the world just isn’t quite the same now. My grandmother passed away this morning.

The undesired call came at 7:50 this morning. Sister C informed me that Gram had passed around 7:30. Her words entered my ears and were effective only in the sense that they gave a factual knowledge of the event to my brain. It was a sterile knowledge. It had no influence on my emotions. What did I feel? What did I experience? I was blank. I wasn’t shocked, nor was I numb. Floating was more like it. I spent the day floating, bouncing between the stark reality of Gram’s death on the one hand and the narcotic safety of the remembrance of her sweetness on the other hand. I tried to stay in the middle, equidistant from these two extremes.

CRYING did not happen today, except for a few brief moments when my eyes filled to the brims but did not spill over. At those points I tried to turn my attention back to the things that would produce average emotions: talking to friends at work, checking my email, hunting for coffee when it had run out in our area, checking my email again, nearly gorging myself on pizza and scungili at lunch, etc.

When people asked me about the details of Gram’s passing, I spoke of her sickness and her leaving as if I was talking about someone else’s grandmother. I think I even felt a certain type of sympathy as if I had truly convinced myself of this and was concerned for this poor one who had lost someone dear to him. It just wasn’t happening to me. If I were to tell you what I really believed, I would have told you that I knew that when I walked into Mom’s later, Gram would be sitting up in bed with her tray across her lap, lifting her coffee cup to her lips. Even as I type these words it feels like it is someone else’s story, not mine.

THOSE OF US who were able gathered at Mom’s yesterday to be near Gram and one another. Mom, Aunt M, Sister C and I were there for most of the day. Later we brought our children. A few of my cousins were able to be there. It was good to see Cousin A P and Cousin C, whom I hadn’t seen in quite a while.

Cousin P came and for me it was like he brought fresh strength with him. When someone said that he had arrived, I jumped to my feet. It felt so good to shake his hand and to see his face.

COUSIN P and I spent a lot of time together while we were growing up. We are only two years apart in age, he being the elder. Many of our childhood days were spent at Gram’s house. What summers we had! What adventures! There was the tree house so high up that I only had courage to climb all the way up to it but one time, and that only to poke my head in for a look and then right back down I went! There was the “Indian Trail.” I was convinced that Indians truly made it in times of old. One of our passions was stock car racing. We drove the “Dune Buggy” around the field for hours pretending that we were Whip Mulligan, Stan Polaski, Frankie Schneider or the “Double Zero” Buzzy Rudemin. We would ride our mini bikes until the palms of our hands were red and itched like mad from the vibrations. In the winter we had the snowmobile. We would put our sisters into the sleigh and cruise across the field at top speed while they held on for dear life. And who could count the number of hours we spent around the pool table?

One very common interest that Cousin P and I had as teenagers was the music and weirdness of Alice Cooper. I guess I can take the credit/blame (depending on how you look at it) for getting us into that. My very first album was Alice Cooper’s “School’s Out.” I let Cousin P hear it and he was hooked! The two of us were some of the biggest Cooper fans going back then!

Last night we started talking about Alice. I brought it up. Over the past few months I had such “hankerings” for Alice’s music that I was on Ebay searching for Alice Cooper CDs every day. I now have most of the early ones that we used to listen to as kids. As we talked about Alice, I realized that beneath the conversation there was something deeper being said. I can say that, on my part, I was saying, “Hey! I miss you! I remember you! I remember a time when we were closer and the hardships of life hadn’t yet cut so deeply.” Why couldn’t I just come out with those words? Why were they disguised in the image of Alice Cooper?

Our common musical interest is only a reminder of the fact that we share the same life. Greater than the influence of our music is the influence of those that loved us and cared for us, of whom Gram was one of the dearest. Quieter than the decibels of our rock-n-roll was the steady love of our grandmother. Calmer than our often-reckless adventures was the unfailing attention that she gave to us. As the two of us stood speechless at her side last night, Cousin P caressing Gram’s hand, I realized this in a significant way. With great clarity I understood that, despite whatever differences Cousin P and I may have had over the years, our lives are extensions of a common life, like two branches growing out of the same tree, and we are family.

IN TIMES of bereavement, I have always felt that my interaction with those who are still living was crucial. I often regret that I haven’t done more or spoken more at those times. Just as the tears refused to fall from my eyes today, so the words often hang in my throat in refuse to come out when I most need to speak. I just hope that somehow those around me sense my appreciation for them. If the eyes are the windows to the soul, I hope that my eyes will convey my heart when my lips refuse to carry my words. The passing of a loved one is an event that seems to strip us of much that is frivolous and shallow, revealing the deeper areas of our hearts. I just hope that I can take advantage of this during this time of grief for the benefit of my family. Perhaps I can boost someone’s spirits, or make someone feel a little less alone, spread some warmth and, perhaps, promote some healing. I know that this is how Gram would want me to act. This is how I will honor her.