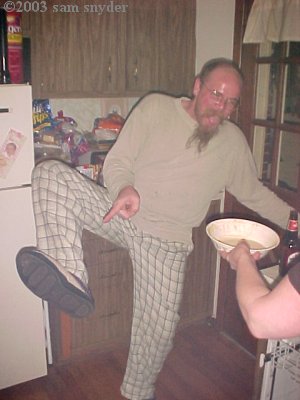 LET ME TELL YOU about my Christmas. It’s a story which includes the typical, the odd, and the utterly bizarre.

The day started with breakfast with my Dad. For the last several years we have been having Christmas breakfast with him and my stepmother at William’s Restaurant in Palmer Township, just outside of Easton, PA. Nothing special there. Just your typical diner. We were a little disappointed this year that they did not have the breakfast buffet. Instead, most of us went for the menu selection called “The William’s FEAST.” Two eggs, two pancakes, home fries, bacon or sausage, coffee and orange juice. It was just your typical diner with typical service and my father’s typical impatience with the waitress. Well, she was your typical incompetent. But then again… it was Christmas.

In the afternoon I took my older kids to see their grandparents. I mean their mother’s parents. That’s right. My ex-in-laws. We went without their mother. My ex. Relations are not very good there. So, even though it is a bit odd, I took the children to see their grandparents on Christmas Day. It wasn’t the first time I’ve done this. One year the ex went too. As odd as it is, I prefer it without her. This year I had the opportunity to have a Christmas meal there. After the breakfast “FEAST” there was not much room in my belly for another meal. However, with enough concentration, will power, and a hint of gluttony, I was able to pack away quite a bit of ham, mashed potatoes, green beans with cream sauce, buttered rolls, shrimp. The giant piece of cheesecake was just too much though. That had to be taken home for later. The kids had a nice time opening presents. Then we were on the road again, headed for yet another meal!

We were invited to Pete and Ruth’s house for Christmas dinner. This is something I was looking forward to very much. These are two of my favorite people in the whole world. Two people who have opened their door and their hearts to me. Two people who accept me as I am and even seem to enjoy it. They are great cooks too! Pete was so excited about receiving new pajamas and a pair of “squishy” slippers that he wanted everyone to come in pajamas. Uh… I didn’t think so.

Both the aroma of good food and the warmth of happy guests welcomed us as we entered Pete and Ruth’s home. The smiling faces in the living room belonged to several relatives and friends. There was an aunt known affectionately as “Sis,” a cousin, a really nice girl named Ivy (who I teased a little too much and now sort of hates me – I’m sorry Ivy. Really.), Joanie (“the little blonde girl from Cell Block A”), and my good friend Greg (who’s name morphed from Craig to Crec to Grec to Cedric and eventually to Clerk throughout the night). For dinner we had an awesome venison roast, fresh green beans, a delicious salad and “dirty potatoes.” And of course Pete’s world famous homemade wine was on hand.

There was plenty of laughter that night. There were video games involving lots of wild driving. There was great music, even a time of acoustic guitar playing. There was the continuous “Cedric/Clerk” jokes at the expense of the always good natured Greg Hartline. Eventually the company thinned out until there were only Pete, Ruth, Cedric, Joanie (“the little blonde girl from Cell Block A”), and myself left. At that point a joke battle between Pete and Clerk ensued. All I can say is that Pete’s wine makes pretty much any joke in the world funny as all get out! Even the ones that had something to do with elephants and plums and the other one about “How do you catch a unique rabbit?” “Unique up on him!” They were funny to the point that I had to run out to my car to get my inhaler before I died laughing. 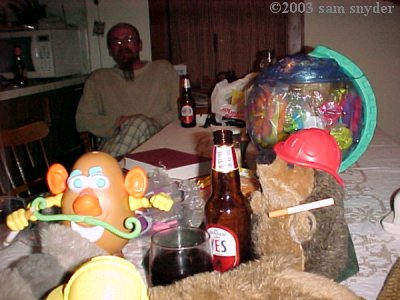 Another bizarre highlight of the evening was the posing of Mr. Potato Head in various lewd and compromising scenes. It is true that “bad company corrupts good morals.” Soon, even Mr. Hedgehog and Mr. Pheasant were indulging in scandalous behavior. Even Joanie, “that infamous hardened criminal from Cell Block A,” just shook her head at the scene taking place. What was that you said? She was wagging her head at the infantile behavior of three grown men? Nah!!!! Go check out the photo gallery (link below) and you will see just how out of control that Tater was!

After it had gotten pretty late, the only ones left standing were Pete, Joanie, and myself. Alright, I think Joanie and I were not really in standing condition. We were more like a slouch kind of thing. It was great fun though! I had not laughed so much in one night in a long time. I had no idea that the girls from Cell Block A were so cute! And funny! She said she couldn’t wait to see what I wrote about the night and wanted me to relate the Cell Block A story. But really, it is sooooo much funnier coming from her. She tells a great story. She can’t repeat a tongue twister very well after a few beers, but she will have to tell you her story herself. “One smart feller he felt smart. Two smart fellers they felt smart. Three smart fellers they felt smart.” (Go ahead. Try that as fast as you can and see what comes out of your mouth!) Pete had us trying to say that and another one, something about “split sheets.” That didn’t come out right when I tried to say it. You can just imagine.

Somewhere around 4 AM we lost “the little blonde girl from Cell Block A.” Pete and I continued a heart to heart conversation until 5:30. Maybe it isn’t the most considerate thing to do to hang around a friend’s house all night long. I know that it encouraged me though. Pete is one person that I know I can be completely honest and open with. I know I can lay my heart on the table and Pete won’t judge me nor condemn me. I know he cares about my well being and will be straight with me. A friend like that is more valuable than all the treasures in the world. Forget the gold, frankincense and myrrh. Just give me friends like Pete and Ruth.

Published On: January 26, 2010
(Originally posted on the website Heron Flight)

Published On: January 26, 2004
(Originally posted on the website Continuum...) THE NEW PLACE is starting to shape up and take on the characteristics of a home finally. The washer and dryer are in, curtains are up, and a few decorations are on the walls. It is slowly but surely becoming "our" place. My good friend Laura, a displaced Jersey girl living in Virginia, Continue Reading →