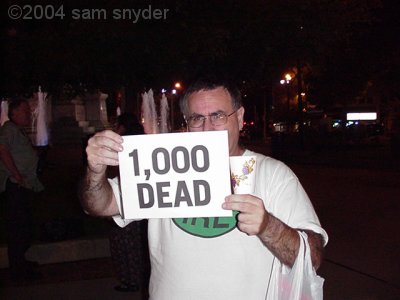 A few days ago, the number of United States soldiers killed in the war in Iraq passed the 1,000 mark. Almost a year and a half after President Bush declared the end of hostilities and called the mission a success, Americans are still dying on the sands of Iraq. Indeed, the majority of those 1,000 died after the President’s declaration.

Tonight, I attended a candle light vigil to remember the dead in Iraq. Vigils were held all across America tonight. I heard about the vigils on the radio station WBAI in New York City while I was driving home from work today. When I got home I logged onto moveon.org. There I discovered that a vigil was planned right in downtown Easton, PA, just across the Delaware River from our home. My son, Joel, and his girlfriend, Kayla, came with me to the vigil.

I estimate that 25 to 30 people attended the gathering. It was a quiet, peaceful time. The vigils were not intended to be rallies or protests, just a time to reflect and honor our soldiers who have died. The participants in the vigil were friendly, normal people, concerned about our society and our troops in Iraq. 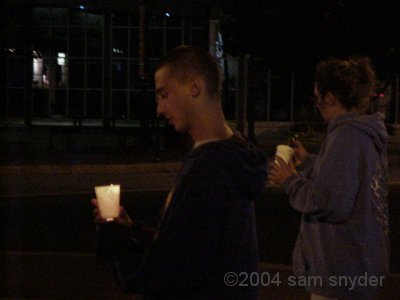 For the most part, we stood around the sidewalk inside the circle in Easton, quietly holding candles. It was a windy September evening covered by a storm threatening sky. They rain held off, but the wind made it tough to keep the candles lit.

A few people held signs reading, “1000 Dead” and “Bush – Kerry, Stop The War.” The signs drew some heckling from some of the passing motorists. We heard comments like, “If we didn’t go there and kill them, they would be here killing us.” “We should just nuke all of them.” And of course, the ever-loving, “Fuck you!”

It is amazing to me that people are so eager to show their ignorance. There is a serious misconception about the role that Iraq has played as a threat to American national security. They were NOT a threat to our national security! Neither the Iraqi people nor Sadaam Hussein, as sadistic and murderous as he was, were responsible for the September 11th terrorist attacks carried out against our people. The war in Iraq is NOT the same thing as the so-called “War on Terror.” Rather, our invasion of Iraq has been a serious diversion away from the War on Terror. It has consumed billions of American dollars. It continues to consume American lives, now rising about the 1,000 casualties mark. At least be a little more logical in your ignorance people. If we should nuke anyone, shouldn’t we nuke the Saudis and the Afghans? Most of the hijackers of American planes, in American airspace, on an unforgettably gorgeous September morning in 2001, were Saudis trained at al Qaeda camps in Afghanistan. It is terrorists like these who are a direct threat to American national security. 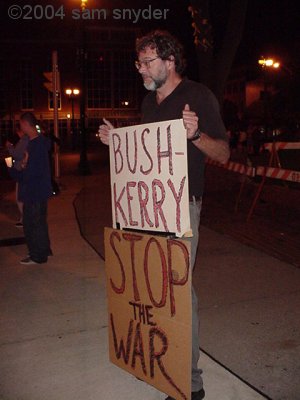 While at the vigil tonight, a reporter for a local newspaper interviewed me. He asked me what my position on the war was. I told him that in the beginning I supported President Bush’s decision to invade Iraq. Although I would have liked to have seen more international support for the invasion, the reasons the President gave for moving ahead seemed serious. Only 18 months after September 11th, still fearful of more terrorist attacks, it seemed reasonable to go after a ruthless dictator who held weapons of mass destruction and a desire to use them against our country. But those weapons never materialized. The reasons for the invasion proved to be false. Then the war was portrayed as a mission to bring democracy to the Iraqi people, to liberate them, to get rid of the evil tyrant Sadaam. It all left me feeling misled and even suspicious that I’ve been deliberately lied to, lied to by rich, powerful men who stand to make millions of dollars because of their oil connections. 1,000 are dead for this?

I was also asked what I thought the solution was for Iraq now. Honestly, I don’t exactly know. It seems to me that the situation is just a mess. The country is not under control. Americans are still dying. Iraqis are still dying. The Iraqi people are nowhere near being ready to govern themselves and maintain order in the society. The divisions between various ethnic and religious factions are more pronounced than they were under Sadaam’s rule. I fear that the Iraqi people do not view our troops as liberators but as occupiers. (Even George Bush has referred to them as occupiers, stating that of course the Iraqi people don’t like it. He said that he would be upset too if his country was occupied.) Maybe it is a Vietnam type of situation and we should get our men and women out of there now. Bush says that we are bringing democracy to the people of Iraq. In my opinion, forcing democracy on a nation negates the very essence of democracy. A government that is “by the people and for the people” must rise from the people, not be placed upon them by an outside force. If there had already been an Iraqi resistance that was willing to fight and die for their freedom (as the revolutionary Americans were willing to do), our military involvement with them would have been justified. But that was not the case. We entered Iraq on faulty premises and without the support of most of our allies. Now we are involved in what appears to be a long and messy situation. 1,000 are dead. I support our troops, so much so that I would like to see them all come home now. Let them return to their families and the safety of our land. Then let us redirect our efforts to find the terrorists who pose a real threat to us, build up our security at home, and rebuild our own country whose economy, health care system, and educational system are in serious trouble. 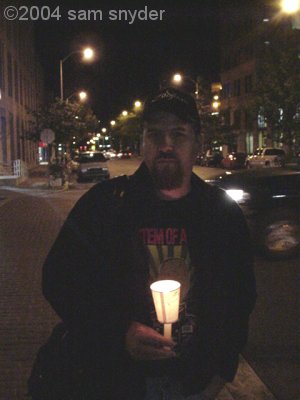 I was inspired by attending tonight’s vigil. Over the past several months I have done a lot of serious thinking. I have decided to be proactive about the serious issues that face our country, making sure that I registered to vote and pestering others to do so too. This vigil was the first public event that I participated in. Tomorrow I will be attending a John Kerry rally in Allentown, PA. While I have voted Republican in the past, Kerry has my support in this election. It will be good to hear him speak tomorrow. It will be even better to exercise my right to peacefully assemble in public in America. For all American soldiers who have ever fought for our freedom, my candle was lit tonight.