Ever feel like biting someone’s head off? Have a few people on your scene who deserve to have their heads chewed off and spit out like a piece of rancid beef? Would you do it if you knew you could get away with it?

Well… Until you come up with your plan for the perfect head chomping crime, I’ve got a little diversion for you. VOODOO PEEPS! These little peckers are oh so willing to vicariously give their lives in place of the big peckers in your life who really deserve to have there heads gnawed off. And it keeps you out of trouble!

First, start with a fresh box of marshmallow Peeps at Easter time. Remove the wrapping and put the box away somewhere. Forget about it until July. 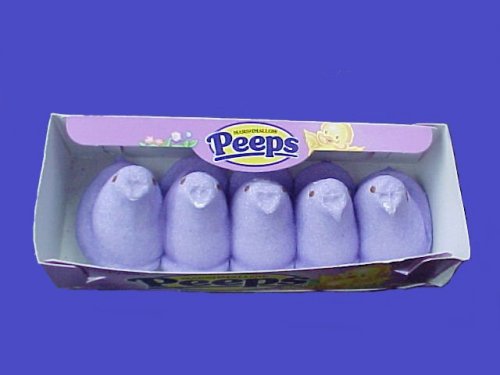 Second, when some fowl excuse for a human being gets your tail feathers all in a knot, remove one of your little Peep friends from the box. (Note: Though you are peeved and all in a huff like a hen who just laid the mother of all eggs, be gentle in removing the Peep so as not to tear the guts out of his fellow beside him. You will need him at a later date for sure. Jerks of a feather flock together. If you have one jerk in your life, more are bound to follow.) Carefully position the Peep within your finger tips, using your pinky as a perch for your sugar-feathered friend. 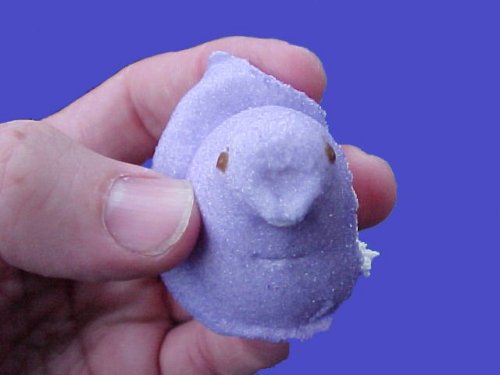 Step three, the most satisfying part of the process: With gusto and delight, with soaring abandon, yet with precision, bite the hell out of his little soft body and rip his head right off his mallow shoulders! Do it as a starved buzzard who hasn’t seen a rotting carcass in weeks! Birds do not have teeth, but you do! Do your carnivorous worst! Bare those canines! Chomp down! Fill his jugular with all of your venemous anger! 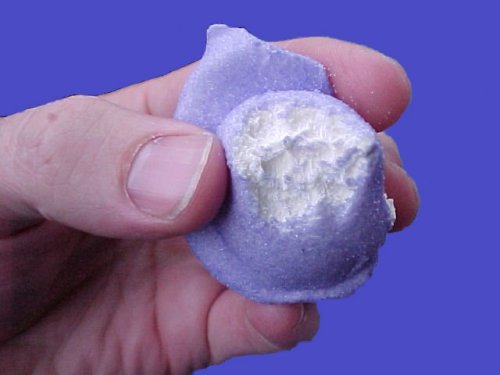 But! Before you swallow, savor the moment! Toss his little egg-head around within your cheeks! Allow his sticky little cranium to migrate from one side of your mouth to the other! Suck his little brains out and feel your frustrations flock away as so many startled sparrows! 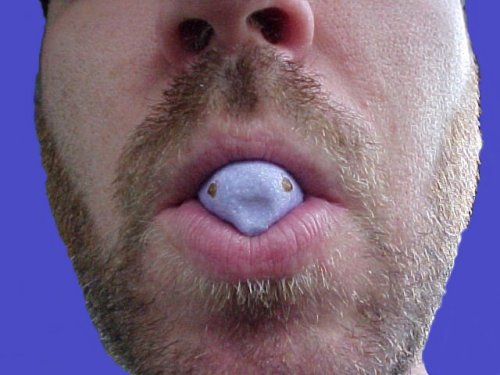 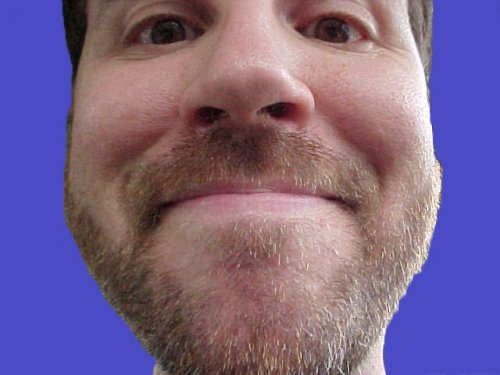 Feel better? I knew you would! (A little birdy told me!)

Just got this in a CNN Breaking News email…

“U.S. offers $25 million reward for information leading to capture of Saddam Hussein, or proof of his death, officials say.”

I’m sorry, but 25 MILLION fucking dollars?????? Pardon my Arabic, but that’s a lot of money! Why not spend it on our children right here in America? Why not spend it to better the piss poor American education system? Why not give it to those humanitarian agencies who are struggling to feed hungry children in our cities? How many humanitarian agencies are forced to cut programs which benefit the elderly, handicapped or otherwise needy U.S. citizens due to funding cut backs by federal and state governments? You know what? Keep our fucking money in our own country for our own people for a fucking change, you bastards! How many middle and lower class Americans are struggling just to make ends meet while housing costs go through the roof and our jobs fall out from beneath our feet as greedy corporations seek to expand their profits by sending our jobs overseas? How about doing something for our own damn economy? We need to get our heads out of our asses and our noses out of the Arabian sand. We are too worried about fixing the rest of the world while our own country is rotting from the inside.

This has been a public service announcement from the fucker who runs this website.

I was driving along on my way home after work today, glanced up into my rearview mirror, saw a good looking girl driving a Jetta. With the aid of my sunglasses, I was able to keep one eye on the road and the other on the girl without my peeping being noticed. Both of us had just gotten onto the highway. She was bopping around in her seat a bit, getting comfortable, playing with controls on the dash. She started lifting her hair up off of her neck, obviously sweating in the 96 degree afternoon. She lifted her hair above her head, allowed it to slip through her fingers, left her arm up above her head, let out a relaxing breath. I’m thinking, “Nice…”

Then she turned her head and smelled her armpit!!!! She glanced back at the road and then took another sniff! (She must have needed a second opinion.)

I have seen women doing numerous things while driving: brushing their hair, applying make-up, singing and dancing in their seats. This is the first time I’ve seen a woman dive into her own armpit while driving! She was in there too! Her whole face!

Suddenly she wasn’t so cute. I put both eyes back on the road in front of me before she had a chance to pick her nose or something while I was still peeping.

“So like, I’m driving along listening to the new Jewel song. Can’t believe she went all Brittany-like. She must have gotten implants too. Like that slut, Amber, who sits two cubes away from Jenny. She always has a whole football team of guys hanging around her desk. I hate her. So I was driving along. It was like so, so hot today! The back of my neck was all ewwwwwie. Like gross!

“Speaking of ewwwwwie… there was this half-bald guy in front of me. He kept cleaning his ear with his pinky! Like totally really gross! Then, I swear, he smelled his finger! Yuk! What is it with guys? Always burping and farting and sticking their fingers in places. Pigs. And it was like sooooo obvious that the perv in front of me was watching me from behind those like so yesterday style sunglasses. Pig. He probably even has kids.

“By the way… I tried that new improved ‘works for a man but is made for a woman’ deoderant this morning. I think it like stopped working on my drive home.

“I’m taking a poll. What do you think? Should I get implants like Jewel?”

Something to Think About

Something to think about…

In regard to the US government’s and big corporations’ influence/control on the media, Norman Solomon (Executive Director, Institute for Public Accuracy) said the following:

“In theory, everyone in the United States has freedom to speak his or her mind. Freedom to be heard is another matter.” (“Target Iraq: What the News Media Didn’t Tell You”, 2003, Context Books)
A lot of voices with various view points are not heard because they don’t line up with the interests of those who control the major media outlets. We have freedom of speech here and our news is not censored. However, many facts are conveniently left out, ignored, changed over time. So what we do hear often has such a spin on it. It’s been sanitized and made to fit in with the agendas of those in control of the outlets. It’s hard to believe anything anymore. Freedom of speech does not mean the same thing today as it did when this country was founded.

The Chicks Dig It 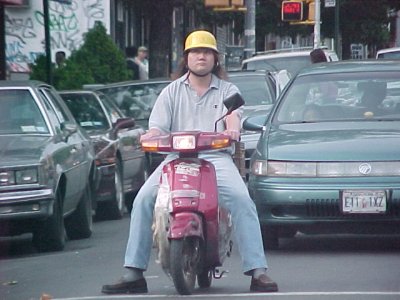 One of my favorite things to do is watch people. Another favorite thing of mine is to take their pictures when they are not looking! Here is a picture from my “people files.” He’s the Cycle Peep, delivering Chinese food in Brooklyn, a motorized fashion statement, the epitome of coolness, the envy of the Hells Angels, cruising at speeds that only packaging tape and loafers can withstand. I bet the chicks really dig this guy. The word is that chicks are into yellow helmets and flaming maroon scooters.