What shall I say about myself and about this website? I have mixed feelings at this point in my life. This blog starts in December of 2000. But because it starts there it obscures the larger context in my life.

If you didn’t know me before the year 2000, you might stumble upon this website and say, “The guy seems… Interesting. Eclectic. Weird. Thoughtful. Creative. Sometimes dumb.”

If you knew me before the year 2000, especially between 1980 and 1999, if you found this website you most likely would say, “What happened to Sam?”

You see, Sam was formerly known as an energetic zealous Christian. Born again, fundamental, evangelical, reformed, pentacostal – I wore all those hats. I preached in prisons. I preached on the streets. I taught Sunday school.

Big deal. All that from my days before 2000 is a pile of garbage, really.

I fell. I became a rebel. For a while my life became sex, alcohol, and rock-n-roll. There’s evidence of it on the pages of this website. That’s not a big deal either.

It all led me to a desert of emptiness. A wilderness of hardheartedness toward God. So many times I opened the Bible and it was like a dead book to me for years. 22 years, actually. There’s a lot I could say about it, and I probably will in future blog posts. The desert doesn’t look like a big deal from a far distance. But when you are in there, there are lessons to be learned. Some of them you don’t learn until you are out of the desert and looking back in contemplation.

For this great kindness and mercy, I am extremely thankful and humbled. The past truly is nothing but dung (Philippians 3:8). There’s still a lot of dung to be cleaned out of my heart. I have a lot of regrets. I can never make up for lost time. But I’m going to try anyway.

So, there’s a definite shift in content in my more recent blog posts. I thought about taking the whole website down, or getting rid of the old stuff that I might be embarrassed about now. But then I decided that doing so would dishonestly remove a significant portion of the larger context of my life experience. But much of it causes me embarrassment and even shame. I can look at the old blog posts only so much and then I need to go pray, go talk to Jesus about repenting from a lot of what I did for so many years, go talk to Him about making sure that my faith is true and my repentance sincere.

So that’s the deal about me and about this website. Since I gave you an overview of my personal evolution above, here is a little explanation of the evolution of this website. It’s definitely not a big deal.

“Blogging Sam” is the third incarnation of my blog, not including two brief stints called “Broken Wing” and “Crash Test Monkey.” My first “online journal” was titled “Continuum…” (The ellipsis is crucial.) – the term “blog” had not been invented yet, probably because the term “weblog,” from which “blog” descends, had not been invented yet. My second big show was Heron Flight. There’s a lot of stuff there.  10 year’s worth.  (That’s a lot of stuff.)  All of the above is now incorporated into this one big, glorious, multi-faceted website. It’s really heavy to lift. Use your legs, not your back.

Please leave a comment to let me know you stopped by or use the contact link above to send me an email.

Check out my other sites (even thought I haven’t done much with them lately):

Doodle Sam – I have a reputation for doodling – at work during meetings, at church, while on the phone, whenever. There’s a world of weirdness at Doodlesam.com. You’ll love it. 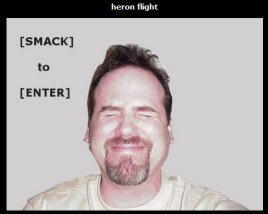 Heron Flight – I used to own the domain name heronflight.com. And I used to write lots of stories there and post lots of pictures and other nonsense. But I got tired of it and, unfortunately, forgot to renew my domain name. Now someone in Hong Kong owns heronflight.com. So, I started over at bloggingsam.com and I reproduced the Heron Flight website. There’s a lot of stuff there. Knock yourself out!