The trains go by,
Pounding through my vains
Is the desire for home
The sounds swirl round
Inside my head and I
See the world rush on.

Here, here upon this plot of ground
Let me feel secure
Now, now take my life from me
I don’t want anymore

Down this drink
In its current, I,
I will wash away
Take my head between
Your loving breasts
In your soul I am safe.

Apostate hymn
By one corrupt, dark man
It will find its lonely way
Above to you eventually
Will you remember me?

So… My band (which still does not have a name) played for a big Halloween party on Friday night. There were 80 people there! There were several very interesting and funny costumes. One man was a giant whoopee cushion. One couple was Captain America and Super Woman. They looked fantastic! Several girls were police officers, arresting the attention of all the guys with their tiny skirts and non-stop dancing.

As for the band, our bass player, Dan, was Elvis. Our guitarist, Landon, was a priest. And I, the sick drummer, was a nun. As we had no official name, we called ourselves “The Church of Elvis” for the evening. This was our first gig together. We pretty well “wow-ed” the crowd. The three of us could tell that we have something good going here. Our next show is on November 11. We need a real name by then!

I wish I had pictures of everyone else at the party. For now, I only have photos of myself. Imagine, I walked into Dunkin Donuts for a coffee before going to the party. A little 10-year-old girl didn’t know how to react, except for laughing when I said, “Bless you, my child,” as she held the door for me. And the kid at the Burger King drive-up actually left the window to bring someone else to see my custome. So, here I am, make-up, nail polish, etc. The fake lashes only lasted a few songs into our show before I ripped them off. Half way through the party the whole costume came off. I finished the night wearing Mr. Bubble boxers and a t-shirt. I’m sure the people prayed for mercy at the sight of that! 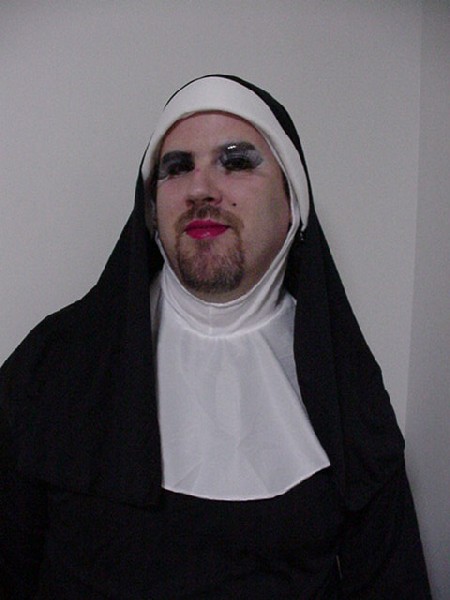 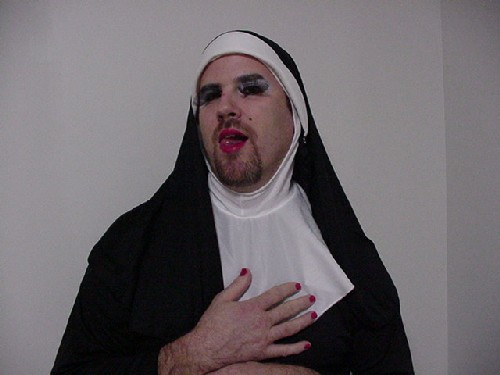 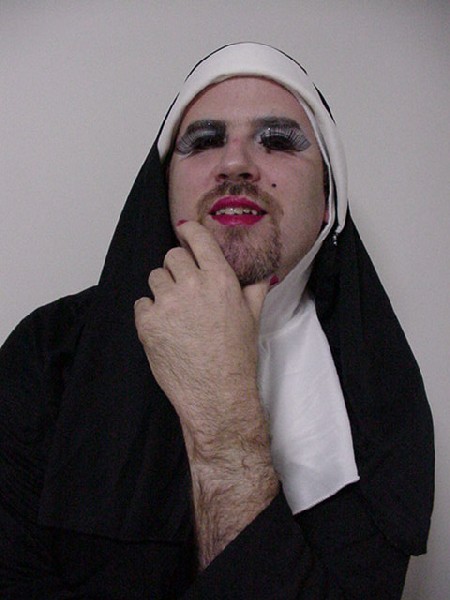 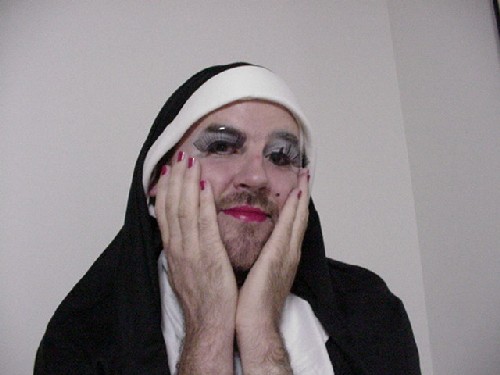 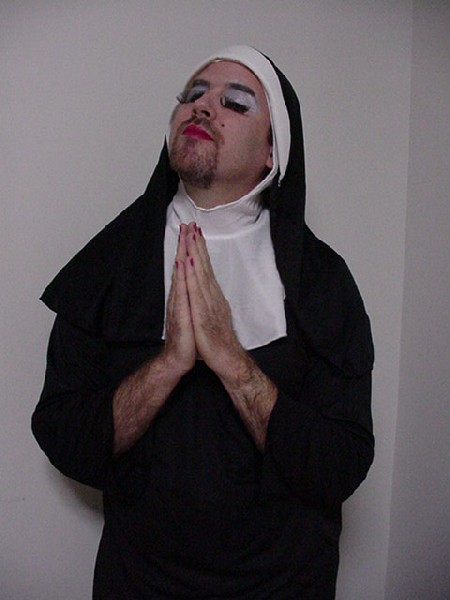 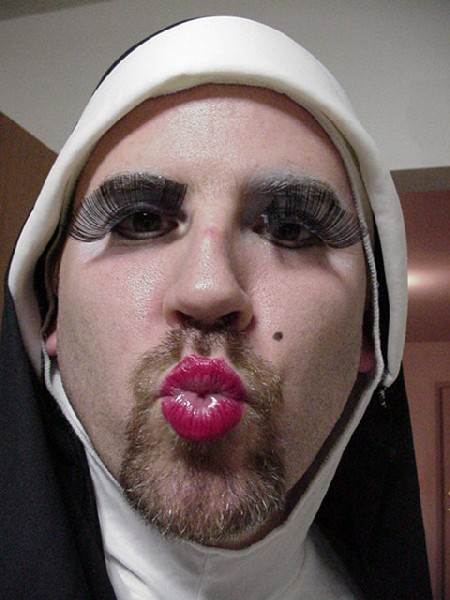 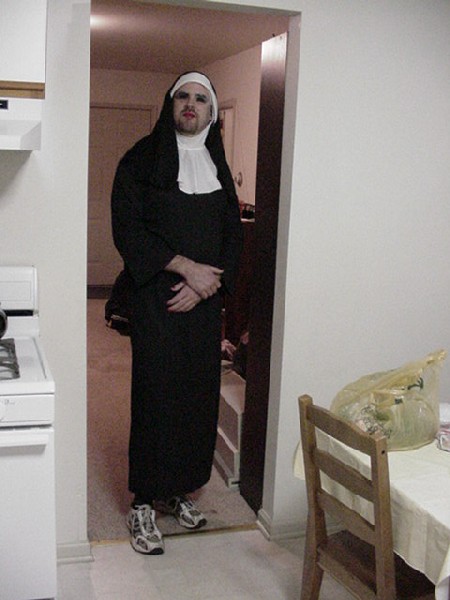 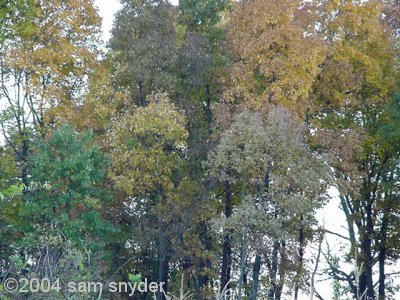 THIS ENTRY is from an email I received from my friend, Greg. I thought it was worth posting it for others to enjoy.

This is the text of a conversation I had with my 12 year old son Ben this morning. It may not be word for word, but it is accurate to the best of my recollection.

We were hiking down the Appalachian trail near Pochuk Mountain just after first light because I had to leave the scout patrol to get to work at 10 AM. It was just the two of us coming down the mountain on a very cold Autumn morning, with the smell of the decaying leaves heavy all around us, and the colors in the trees as brilliant as any I’ve ever seen.

Dad: I laughed and said, “Yes, He is a busy guy. But He can talk to me and you and a bunch of other people at the same time.”

Ben: “But doesn’t He get confused?”

Dad:”Maybe you’re trying to think of what to say.”

Dad:”Yes, that is pretty cool.”

It happened to be Sunday morning, and although we were not in Church, it was as satisfying and encouraging an experience as I have had at any Church during the past year. Satisfying because it confirmed that I have an influence in his life in spite of all the obstacles and distractions, in spite of the fact that I am not able to take him with me to Church regularly, and given a choice, he would often rather stay with his mom than come to Church with me. But surprisingly, he has an eye for spiritual truth, and seems comfortable coming to me with questions like these. Perhaps God is doing a work in his heart after all. Perhaps my prayers are not in vain.

Whoever is reading this, thank you for sharing in my joy, and if you are also willing to pray for Ben, thank you for that as well. I do believe that our God hears our prayers, and sometimes that’s the one thing that makes all the difference. 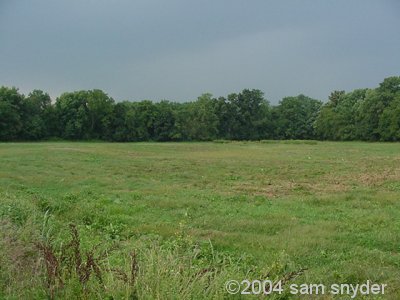 I WENT to visit my father today. The cancer is taking its toll. Six months is what the doctor has given him, as if doctors are the givers of life. That was almost a month ago. Don’t do the math.

I brought a funny movie with us so that we could all watch it together. The movie was one that I saw at my friend Pete’s house recently, “Along Came Polly” with Ben Stiller and Jennifer Aniston. I thought that maybe it would lighten the mood and create a happy memory. Deep inside I was hoping that enough laughter would shield me from the reality of my father’s disease. With enough merriment maybe time would stand still. Maybe the shared hilarity would be enough to drive time backwards and my father would be all better again. They always say that laughter is the best medicine, right? Part way through the film my dad was holding his belly. That would have been a normal motion during a funny flick. However, my stepmother’s question, “Do you need some percocet, Pappy?” became the non-funniest line during the movie. Somehow, Ben Stiller’s farting noises in Aniston’s bathroom were no longer funny either.

My father appeared evidently weaker than the last time I saw him a few weeks ago. He was noticeably thinner. He has reached that point of looking unhealthily thin. I know that next will come feebly thin, and then… He has become too weak to take the dog, Murphy the black labrador, out to the back yard. True, a black lab is a large, strong dog. But my dad was always a big strong guy. No dog ever intimidated him. Murphy is so used to my dad taking her out that they now have to trick her by having my dad walk part way down the steps and then my stepsister takes her the rest of the way. Then Dad walks back up the steps and is exhausted.

At dinner, my father’s suffering was further displayed. The poor guy can hardly eat. It’s mainly a side effect of the chemo. He went through heavy chemo treatments since he was diagnosed in February. When that proved to be ineffective, the doctor recommended a milder chemo treatment in order to improve his quality of life. To watch a man, who once loved to eat, sit at the table and poke at the tiny portion of macaroni on his plate was depressing. He left the table at one point. As my stepmother watched him go down the hallway she said, half to herself, “It just gets a little worse each day.”

Two years ago, my dad’s brother died from cancer. His remains are interred at Arlington Military Cemetery in Washington, D.C. I was not able to attend my uncle’s funeral service at Arlington. My dad went though. Last year he went again to visit his brother’s grave. This year he has cancelled his trip to Arlington. The bumpiness of the car ride makes the pain from his tumor intolerable now. For the same reason, he doesn’t drive into town to have coffee with his buddies as much these days.

There is no reversing this for my dad. I knew that as we said good-bye this evening. With much effort, he walked us to the car on our way out. He patted my shoulder a few times and told me he loved me. I saw the tears in his eyes as he turned away. He stood on the lawn and watched us. I couldn’t drive off right away, just started the car and waved. He waved. I thought that maybe if we just stay right there and wave back and forth to each other, it would never happen. We would never lose sight of each other. He would never leave.

But I know that one day there will be a last wave, one last good-bye, one last, “I love you,” and a pat on the shoulder. No matter when exactly it happens, it will always, always, always be too soon. Even if there was some bizarre quirk in the space-time continuum and we somehow found ourselves sitting on the couch doubled over in laughter at Ben Stiller’s antics for a few more millennia, sooner or later the movie will end. Movies always do. Sadly, so do lives.

I feel that I should wrap up this entry with something positive, something upbeat or happy. You see, that right there is one of my faults. Maybe I’ve watched too many movies, been too conditioned by Hollywood. Life is not like the movies. There is real pain in life, real sadness. People do die. True, there are plenty of good and pleasant things in life: love, peace, joy. There is faith to connect us with things that transcend this life. But tonight, what I sense is the frustration of humanity’s mortality. That sense is just as valuable as faith, in its own way.