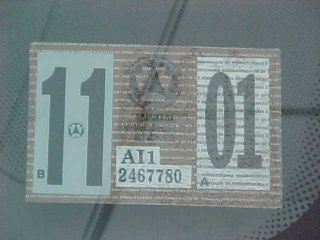 ONE of my careless tendencies is to forget about changing the oil in my car. Stepfather is very alert to this and seems to have an internal clock that sounds an alarm when MY car is about due for an oil change. It’s amazing! How many times has he asked me, “Change your oil lately?” right when my odometer is at 2,999 miles? As I respond, “It’s about due now. I’m going to do it soon,” with procrastination lurking behind my words, Stepfather begins his very slick lecture about the need to maintain the purity of my oil and the miseries that will ensue if I fail to do so. He’s the Dr. Koop of auto mechanics. He will probably demand that some sort of label be placed on the side of my car. As all good doctors, he has nothing but good intentions.

WHEN I look back over the years, Stepfather’s reminders to take care of my vehicles are one of many styles of melodies that emanate from his heart. I think of how he has consistently played those melodies over the noisy crowd of my rebellions. Believe me, there have been times when the two of us have nearly pushed each other to insanity! I remember “hating” his guts in a teenage sort of way. I remember blatantly giving him the finger (with my bedroom door slightly open) and he seeing me. I hurled sarcasms, insults, taunts, and near denials of his existence. Yet the symphony played on! Surely, certain sections of his ensemble had their weaknesses. But the overall effect is something so positive and beautiful. It is music that has become part of the soundtrack of the movie of my life. His courage to walk onto the stage time after time and raise his baton to conduct the orchestra again amazes me! How does a man enter the life of an angry 10-year-old boy and continue to perform with overall consistency for years? I applaud him!

NOW TODAY he should be proud of me! Today I accomplished a something that neglect with diligent procrastination. Today’s accomplishment consisted of having my car inspected and finally receiving a current inspection sticker on my windshield. (Proof of which is displayed on this page for the entire world to see!) It’s not that having my car inspected is a big problem. My current car is only a year old. It’s the time involved and the hassle of doing it that are the problems. I rationalize my avoidance of car inspections by saying that we single fathers have no time for these things. There should be a law exempting us from the obligation of car inspections! However, today, after 13 months of driving with NO inspection sticker on my car (and much longer than that with my previous car), I have attained true conformity with the rest of society and submitted my Toyota to the mundane ritual of official state car inspection. My single father comrades please forgive my betrayal of the cause. I may have let you down, but Stepfather is smiling!

What was that you asked, Stepfather? My oil? Uh… Well… I’ll get to that tomorrow. I promise!