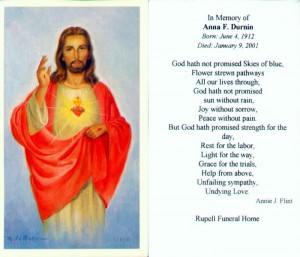 “WITH the winter sun on our backs, this concludes our service of remembrance.”

So said the aged funeral director once the priest had finished with the funeral rites. The director announced that everyone was invited to my cousin’s house for lunch. The crows called to one another somewhere behind us. The snow began to thaw. Traffic on the road continued to pass by. We stood frozen in that moment, reluctant to leave. No one spoke.

(Click the image of the prayer card to see a larger version.)

Slowly people began to move, approached the casket. Single carnations were placed along the top of Gram’s casket, first by her daughters, next by her great grandchildren. Soft words were spoken amongst us. Directions to Cousin A P’s house were announced. We made our way to our cars, each taking his turn to rejoin the flow of life at the cemetery exit. The quietness of the funeral slowly faded as the sounds and activities of life returned from all directions. Someone turned the radio on. A nephew was singing in the back seat. Bellies were rumbling. The fuel light came on in the car.

AT the viewing on Thursday, many tears were shed, many arms were extended with love and sorrow, and many missed relatives were embraced. Each face brought with it its own lifetime worth memories. Some of those faces even wore the resemblance of family members which had passed years before. Friends and acquaintances brought a reminder that our family is not isolated. There are others who love us as well.

It was moving to see the children through these days. They were so brave. They brought their tears and their love and approached Gram’s casket with courage. Grammy Durnin had loved them completely. That love seemed to yet radiate from her body and they drew near to her. There they saw their faces in pictures placed in the casket. They took their seats with questions in their minds. Who were the other children in those pictures? Who are all of these people seated here with weeping eyes? Who am I among these people? And so, because of the love of their great grandmother, they considered the issues that matter most. They pondered the foundations of life. They wrestled to grasp the significance of death. They probed the mysteries of faith, God, Jesus, resurrection, heaven. Thus, strength was invested into our family again.

BELIEVE IT or not, there was quite a bit of laughter in our midst this week. Some of this may be attributed to nervousness. Sometimes, when you are so afraid of the unknown, all you can do is laugh. However, I would say that the deeper reason for our laughter is that it is a natural part of our family. It is part of who we are. Many in the family have such a great sense of humor. When we do gather, the laughter cannot be prevented. There was a common thought too that Gram would want it this way. She loved to hear laughter. Even during her last hours, when she was too weak to say any of our names, she did manage to laugh when she heard laughter around her. I believe that our laughter during this week, even in the funeral home, was not disrespectful but honoring to her. It was cathartic to us as well.

I WAS allowed the honor of speaking in eulogy to my grandmother at the funeral service. Seven years ago I was asked to speak at my grandfather’s funeral. Yesterday my words were a continuation of what I had said then. My grandparents were unified in their love for their family. We were their greatest possessions. It was impossible to speak of Gram without speaking of Pop as well. They invested themselves in us. They were kind. They were generous. They were not striving to own a big house with nice furniture that you were not allowed to sit on, or expensive collectibles that you were afraid to even breath around less you knock one over. No, they lived and gave for us. They did not think of taking vacations alone. They insisted on dragging as many of us as possible along with them. Their earnings were spent on pool tables, mini bikes, snowmobiles, grills for picnics, tickets to amusement parks, mobile trailers to haul the grandchildren. I could have spoken for hours about these things at the funeral.

MANY of us went to Cousin A P’s house in the afternoon. A beautiful spread of food and drink awaited us when we arrived. The coffee was hot. The wine was soothing. The company of one another was refreshing. 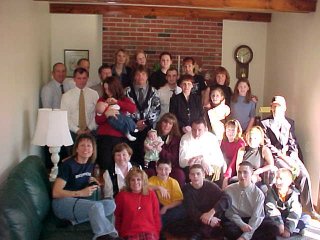 Plans were made to have a family picnic in June. There was a common feeling that it has just been too long since we last gathered as a family. There needs to be some good times. Our children need to see us gather for joyous occasions not only the sad ones. Second and third cousins need to know who their relatives are. Those of us who are older need to restore lost relations, catch up on one another’s history. There is a need for healing. Like any family, ours is made up of humans. Humans fail. Humans sometimes hurt one another. Yet, we can learn to forgive. We can learn to make amends. Some relations in our family may never know complete healing, but perhaps those relations can be made better than they now are. For the sake of all involved, we can only hope so. Life is so short.

MY grandmother’s funeral activities are concluded. However, her influence upon our lives will never end. She lived for us. She spent her last days at home, her last hours with many of us near her. She died at home. This is what she wanted. We would have it no other way. Her warmth, kindness, humor, and generosity will be with us. Her investment in our lives is now complete. I hope that her values and qualities will live on in those of us that she left behind and in those of us who are yet to come. This will be an honor to my grandmother.

Published On: May 25, 2010
In my house, if you use the last ice cube in the tray, or if there are three or less ice cubes left after you take yours, FILL THE TRAY. My desire was for a glass of Coke on ice with my ham and cheese sandwich. That would have made me happy right now. A Coke and a smile. Instead, Continue Reading →

Published On: May 25, 2005
(Originally posted on the website Heron Flight) I've started a new daily photo project. This one is called "The Red Rose of Jersey." We recently moved, hence the reason for not having time to write much of anything for a while, and now have a nice front porch and sidewalk area that we do not have to share with Continue Reading →