WITH A KNICK KNACK PADDY WHACK 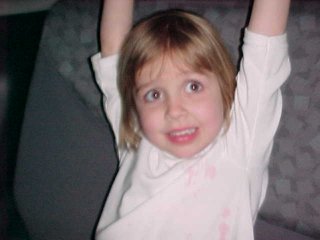 SO yesterday I had to make the trip to pick up H and M. It rained the entire time. And to make matters worse, I missed my exit near Harrisburg. This was the first time that X.2 and I were to meet at a new location. I knew that I was getting close to the place. But then something just did not feel right. It was at that point that a minor miracle happened: I stopped and asked for directions! I still arrived on time and X.2 was actually there on time. Another miracle!

The girls and I had not seen each other since January 1. So we were all so excited! The hugs and kisses were flying! Both H and M were talking full speed at the same time. There was so much news to tell! “Do you know who Amanda likes?” “Guess what I made in art class!” “Daddy, did you know that Adam and Eve died in the flood? That is what my teacher said!” “So you want to taste my peach lollipop?” 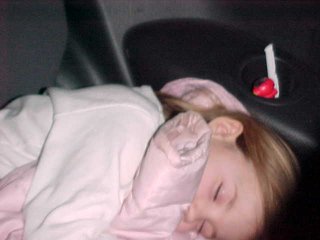 AFTER about 20 minutes of driving, H decided that she was going to go to sleep. And sleep she did! She was out all the rest of the way home. She even slept through M’s high decibel sing/shout, “and BINGO was his name, oh!” Her clapping and her singing were completely out of sync. But she was having a great time and I was almost in tears laughing. While H slept through it all!

And the little girl’s question, “How can a man roll home, Daddy?”

As the old man was rolling home, the little girl’s decibels began to rise again. Then the words to the song began to change:

And on the variations went for miles and miles! To make it even funnier, M kept changing the pitch of her voice between high and low. She was a riot. It was so funny that I even clicked off a few pictures over my shoulder in the dark while I was driving. (Just do not tell my mom. She will yell at me for doing that while driving!) 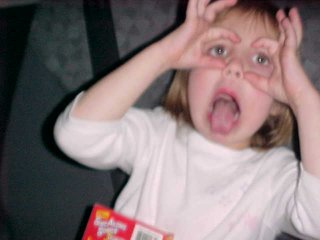 YOU KNOW, all this paddy whacking reminds me of a funny joke:

A FROG goes into a bank and walks up to the window. He can see from the teller’s nameplate that the teller’s name is Patricia Whack. So he says, “Ms. Whack, I’d like to get a loan to buy a yacht and go on a cruise.” Ms. Whack asks how much money he wants to borrow. The frog says around $55,000. Ms. Whack asks the frog his name and he replies “Kermit Jagger, it shouldn’t be a problem, I know the branch manager.” Ms. Whack explains that $55,000 is a large sum of money and that he will need to put up something as collateral against the loan. She asks “do you have anything as collateral?” Kermit says, “Sure, I have this,” and produces a small pewter cricket, about an inch tall. Stunned, Ms. Whack explains that she’ll have to speak with the branch manager and walks into an office at the front of the bank. She finds the branch manager and says: “There’s a frog by the named of Kermit Jagger out there who says he knows you and wants to borrow $55,000. He wants to use this as collateral.” She holds up the small pewter cricket. “Like, what is this thing suppose to be?” So the branch manager looks back at her and says:

It’s a knick knack, Patti Whack. Give the frog a loan. His old man’s a Rolling Stone.”

WELL, it looks like this weekend will be a fun one- plenty of singing and probably some dancing in the kitchen. I recently got a few CDs by Buddy Holly, Bill Hailey and Roy Orbison. Plenty of dancing tunes there! We have already been taking lots of pictures. Some will be posted here in a few days. Plus we are going to have a party for M’s fifth birthday. Man, I better go! I’m missing all the fun! “So with a knick knack paddy whack I’m shutting off the ‘puter, this young man keeps getting cuter!” (Oh, it’s true! It’s true!)