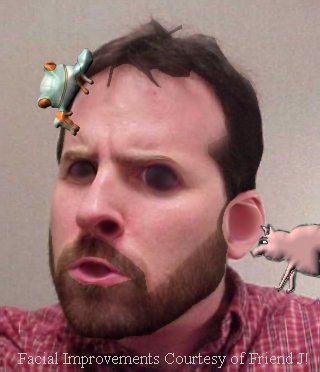 LET ME tell you about the mental abuse that I have had to endure this past week. Well, it sure felt like abuse! Classes, methods, constructors, abstraction, inheritance, hash tables, vectors, POLYMORPHISM. Stop! Enough! Yes, I have been in Java class. This was actually my second round of Java class. The first class left me down on the mat bleeding from my ears just a few weeks ago. I barely got back on my feet when it was time for the second class. Ding ding! Pow! Ugh! Right in the brain again!

Going to class for a whole week can really throw your routine off. We have classes in a different company office located about 20 minutes from our office. It’s not a very big place. But our classroom is on the second floor, down a tremendously long hall with nothing on the walls. There is a real inconvenience at this place in that the bathrooms are at the very opposite end of the second floor near the stairwell that you enter through. One realizes the true length of that hall on the first time you take a class there and drink a cup of coffee first thing in the morning! Those bathrooms seem like they are miles and miles away then! I’ve learned to adjust to this by beginning the long trek to the men’s room when I am just half way done with my coffee. By the time I get there that half-cup is just about all the way through my system.

A certain friend of mine back in the office helped to lighten the anguish of class by sending emails to me at various times during the day. That kind of kept me in touch with the real world somewhat. Once she sent me a fairly off-color picture hoping that someone would be sitting behind me and see it when I opened it up. Her plan worked unfortunately. The funniest was the email that simply said, “Hey LOOPY HEAD!” While heavily under the influence of Java in the middle of a lecture, that line struck me as so funny that I nearly blew snots on my monitor trying to hold the laughter in! (Yeah, I know. That’s kind of gross.)

THE BUILDING where we have class is located in a nice area. Down the road from the place are a few farms. I made it a habit to walk during lunch each day. It has been a little hot here lately. I think we reached 91 degrees yesterday. But even in the heat it was a nice break to walk for about a half-hour and just take in the scenery. There were a lot of different birds in the fields: geese, red-winged black birds, hawks, swallows. The sky was blue. The sun was hot. But my brain appreciated the relaxation and my body certainly needed the exercise, especially after eating lunch. Ah, lunch! Let me tell you about lunch!

There is a deli here that makes the world’s best cheese steaks. It is right around the corner from the building where my class is. Nearly every time that I am here for classes I go to that deli for lunch. I went there three days in a row this week! I strolled on in there, strutted my way up to the counter, spurs clinking, and said to the waitress, “Gimme a cheese steak with fried onions and ketchup, little lady.” With a wink, “Coming right up, cowboy,” she replied.

The second day that I went to the deli, I sauntered on in as usual, ordered my usual, and was standing there feeling rather manly when the door banged open. In walked a huge construction worker, his dump truck tethered outside and his posse of laborers close at his heels. I, in my Levi’s Dockers with my cutesy little work badge clipped to a belt loop and my comfy little business casual cotton/polyester shirt, suddenly found myself surrounded by sweat and tattoos. There I stood a tattoo-less programmer. But when the waitress called out, “Cheese steak ready!” and I stepped up and laid my money on the counter, those fellows knew that I was a true carnivore! Oh yeah! They could tell by the look in my eye that I was no vegetarian, despite my nerdy appearance. I could see the envy on their faces and the growls from their stomachs as I walked on out of there with my half pound of fried flesh. I rode off under the blazing noon sun and thought if I ever got a tattoo it would be one of a Tyrannosaurus Rex, King of the Carnivores!

Okay. So I would never get a tattoo because I can’t stand needles. There it is. The truth is out. Yup! I’m one of those guys that pass out if I see a needle coming my way. I feel kind of queasy just writing about it! A nurse once told me that there is actually a term for the fear of needles. I forget what it is. She said that it usually affects men more then women. I just wonder if I still qualify as a cowboy if I am afraid of needles.

Okay. So I am not really a cowboy either! I am just a geeky programmer who has just received the second phase of a Java lobotomy! No horse. No guns. No spurs. And I happen to like my Dockers! Thank you very much! And now I have a web page to make! So if you will excuse me, I will be on my way now.

BY THE WAY… You might notice that the picture on this page is rather similar to the picture on the previous entry. It’s amazing what can happen to a guy after just one week of class! It’s even more amazing what can happen to a guy’s picture when one of his friends is armed with a web browser and Paint Shop Pro! Actually, I am looking more and more like this photo these days. Just ask my kids! And the whole pig and frog thing… Now there is an idea for a tattoo!