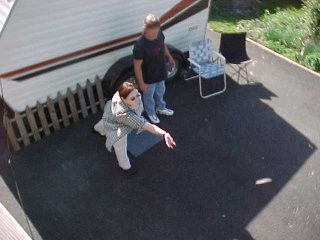 TRY for a ringer. Aim for the hub. A little bit of strength. A little agility. Some skill. A little bit of coordination. And a whole lot of patient practice! But you also need to determine when an all out attempt for a ringer is just a little too risky. If you misaim slightly and hit the hub wrong, you might end up losing all points completely. Sometimes you need to know when to forsake the ringer shot and instead aim to get closest to the hub and at least gain one point, perhaps “digging” your opponent and forcing him out of the way.

Now, I suppose you think I am talking about the art of pitching quoits in that first paragraph. Well, you are sort of right. But my primary thought is about raising teenagers. I am learning that there is a certain skill involved in raising that unique form of human being. Parental agility and coordination are definitely required. The ability to juggle is always a plus. Patience. One cannot say enough about the need for patience in the realm of parenting teenagers. Sometimes I wonder if God’s primary purpose in giving us children is to develop our patience. Notice I did not say “teach us patience.” Sometimes “teaching” is enough. But for most of us it takes stronger measures to work this highly unnatural quality into our characters. Sometimes it takes molding, carving, breaking, remolding, shaping, grinding. In my case it has taken downright “bludgeoning” and near “pulverizing” to achieve even a minimal level of patience. Plus parenting takes practicing, especially with teenagers. They are semi-adults and they can spot your flaws and inconsistencies. Boy can they point out those inconsistencies quickly! (They have yet to enter the school of patience.) So all one can do is one’s best. When that doesn’t work one can only try again, striving for improvement. Recognize your weaknesses. Admit your mistakes. Step up to the line and pitch again. The one thing you can never do though is QUIT!

LAST weekend my family got together for a picnic at my Mom’s house. Sister C, B, Nephew J, Nephew P, Niece B, Sister Ch, Brother B, Brother B’s new girl, Mom, Stepfather and Stepfather’s Friend F were all there. Dogs and burgers were cooking on the grill. (Sorry Sister Ch, veggie dogs just don’t do it for a carnivore like me!) Mom made her world famous potato salad. The kids were hyper from all the soda they were drinking. The sky was so clear. The air was warm. It was a good day for a picnic. It was a super day for pitching quoits! I got the boards out of the trunk of the car. We put the hubs on. The games began. 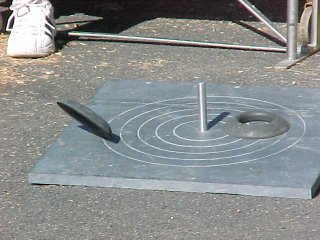 LET ME fill you in on quoits (Pronounced “kwaits”). Pitching quoits is very similar to pitching horseshoes. The game seems to have originated in England. There are several varieties of quoits. In the area where we live, people play what is referred to as Pennsylvania Slate Belt quoits. The quoits themselves are circular and made of hard rubber (as opposed to steel quoits used in other parts of the world). The object of the game is to “pitch” these quoits onto a 2″ x 2″ slate board, attempting to throw the quoits onto a metal hub in the center of the board. The boards are set up at a distance of 18 feet from each other. Players take turns pitching their quoits. The player who throws his closest to the hub earns one point. The player who throws a “ringer” gets three points. Here is an interesting website with a lot of information on the game of quoits: www.quoitpits.com. Pennsylvania Slate Belt quoits is a fairly localized game. It is popular in northeastern Pennsylvania and small parts of northwestern New Jersey. Outside of that region most people do not even know what you are talking about when you mention the word “quoits.” (“Quoits? Isn’t that a country that had something to do with the Gulf War?) It is common to see people in our area pitching quoits in their backyards. Often the bars around here have quoit boards in addition to dartboards and pool tables. There are even quoit leagues in this area. Those are the “hardcore” quoit pitchers. You don’t want to mess with them!

My family is of the “backyard” quoit pitching variety. We certainly had a good time playing at our picnic. We had some rivalries going. Mom has a killer pitching arm. Now I know why those spankings hurt so much! Ouch! Do you know that she even broke a hairbrush over the back of my hand one time? I will have to tell you about it sometime, if I can bring myself to face such a traumatic episode of my innocent developmental years. (“Heh heh! Hi, Mom!”) B and Stepfather were pitching like maniacs and each had several ringers. My sisters pitched like girls. (“Sorry, couldn’t resist!”) I don’t remember Brother B pitching at all. But he turned 21 today (“Happy birthday, Little Bro!”). So, maybe he is man enough to pitch some quoits with the big guys now.

AS FOR ME, well, I could not get a ringer to save my life that day! I just could not get my “groove” going. I lost my “mojo.” I was all thumbs and left feet. Superficially I would tell you that it was because I was tired from biking 20 miles with Friend J the day before. But in reality, I think it was because of some deeper things. Maybe I can explain without getting too detailed.

Let me return to the quoit pitching analogy. Being a single parent is like playing quoits with the boards set twice as far apart. After a while the quoits begin to feel like they weigh two tons a piece. Often it seems like you are forced to throw with your weak arm. It gets a little harder to determine when to go for the ringer and when to try with all of your might just to get close enough to the hub to score one point. If you are a single parent, I know you are shaking your head in agreement right now, even if you have never played quoits. You know what I am talking about. Sometimes it feels like you are never going to win. You feel outnumbered. You have more opponents than you can name and most of them CHEAT at the game! You get frustrated. You get discouraged. You often think that you could do better if you had a partner on your team. Often you just get plain old TIRED! Sometimes you might even entertain the thought of walking away from the game. Now, add to all of this the “handicap” of parenting teenagers on your own. Man! Now it’s like trying to pitch with your hands tied behind your back! 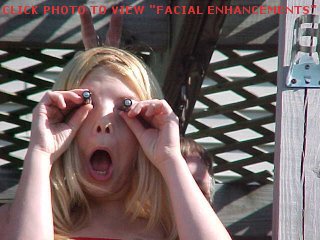 Do you understand where I am coming from? When I woke up on the day of our picnic my hands were already tied behind my back. My body was beat from that 20-mile ride. But my emotions felt like they had been on a 20-mile ride and run over by a truck on that last and final hill right before home. I woke up at 10 AM starving. So I ate a piece of pizza. (Hey this is a single parent household run by a MAN! Sometimes anything goes when it comes to filling bellies!) I lay in bed reading a good science fiction book attempting to escape for a while (book 4 of the Dune chronicles by Frank Herbert). But I fell asleep and didn’t wake up until 1 PM. I just did not have the strength, agility, coordination or patience to accomplish the whole parenting teenagers gig that day. It even showed in my quoit pitching when I finally got to the picnic.

IT SEEMS that it is always on these kinds of days as a single parent that your opponents decide to play rough. After a few whacks in the forehead, you realize that they are no longer attempting to merely get a ringer on the board. They are aiming for your brain! That is when you remember that parenting really is not a friendly backyard game where the only thing you stand to lose by missing the mark is a little bit of dignity when the other guys tease you for pitching like your sisters. No. Parenting is more like a war with immensely high stakes! The stakes are the well being and development of their minds, hearts, bodies and souls. It is a war of multiply and complex battles, the outcome of which has far reaching, lifelong and even eternal implications. Yes, in the middle of the picnic I took a few shots to the head. A certain adolescent offspring of mine decided to give the old man a run for his money. It is amazing what strength one can find when the need arises! Somehow, after getting knocked on my butt momentarily, I managed to get up, brush myself off and pitch my quoits. Yes, I missed the first time. And the second. I got a little closer on the third. I knew better than to try for any ringers. You sometimes have to pick that battles that promise the greatest success and throw for one pointers with all your guts. I think it worked for me a little that afternoon. I may not have won the battle that day. But I did not lose all my ground either. The war is not even close to being over. I might talk about quitting. I might feel like walking away from it all. But ultimately I WILL NOT quit! I might be all thumbs and left feet. I might be weak and tired at times. I might have to take on a few Goliaths as opponents.

Now hand me my quoits and step aside. It is my turn to pitch!