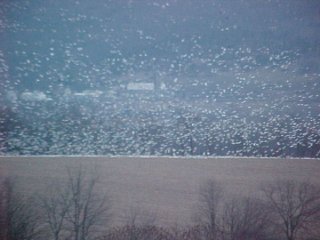 LAST NIGHT we had our first substantial snowfall of the winter. We got at least six inches. Maybe more. I was at my Dad’s house. We were watching the Oakland Raiders play against the New York Jets. Football is something that I rarely watch these days. I don’t watch sports much. Come to think of it, I don’t watch much of anything on television. It was good to watch the Raiders though. It brought back a lot of memories. They were my team when I was a kid. Somewhere in the middle of the second quarter, the snow began to fall. The ground was covered almost instantly. It sure made for slippery driving conditions.

Given the treacherous, life-threatening roadway conditions, I felt that the prudent thing to do was to leave Dad’s promptly. I cleaned off the car, carefully made my way out of his housing development, stopped at the nearest Dunkin Donuts for a coffee. A man has to have his priorities straight, you know!

Later I picked up Joel, Sarah and Tim at their mom’s. They were happy about the snow and hoping to be off from school the next day. (No such luck, only a one-hour delay.) As we drove home and talked about the snow, one of them said, “Hey Dad, maybe we got all this snow because we saw the Snogies the day before.”

ON SATURDAY, while driving the kids to their mom’s, I was telling them about an incredible sight that I saw earlier that morning. I was on my way to a business appointment with an old friend from high school. I could not believe what I saw along the way. I said to the kids, “You should have seen it!”

Their response was the same as yours, “Snogies?? What’s a snogie??” 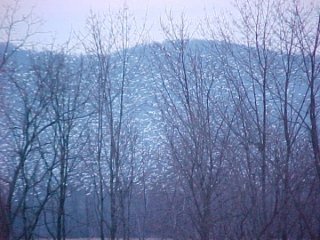 Funny how we can misunderstand each other sometimes! What must have been in the minds of those kids for a moment when I said, “You should have seen it! There were THOUSANDS of snogies in that field!” Did they envision little gnome-like creatures? Is that what a snogie really is? Or did they imagine something hideous and grotesque? Something like overgrown, mutated, biting fairies? I would love to see the images in their minds for that moment before they realized what I was really talking about.

Truly, I never saw such a gathering of geese before! What makes it even more amazing is that Snow Geese are not so common in our area. Every year we have multitudes of Canadian Geese migrating through. I only saw one small flock of Snow Geese before. That was about a year ago. When I first saw these geese on Saturday, I was not sure what it was that I could see through the tree line across the field. They appeared as large pieces of white paper swirling along the ground. Then I thought that maybe they were gulls, common birds around here although not in such numbers. When I got closer to the scene I realized that they were Snow Geese. What a sight!

Later, when the kids and I got to that spot, there were even more geese. I stopped the car to take pictures. Even from a few hundred yards away we could hear their honking. They were covering the fields. Every so often they would take off, circle the field and land again. We moved up the road a little closer and took more pictures.

As we watched the birds take off and land again, I said, “It’s like the Dance of the Snogies.” Snogies had already become our favorite new word. And now another element of humor was brought into the experience. When I said “Dance of the Snogies,” Sarah changed it to “Dances with Snogies” like “Dances with Wolves.” Remember that movie with Kevin Costner? Dances with Wolves was the name that the Indians gave to him. The white woman that he found among the Indians was “Stands with a Fist.” I think one of their leaders was “Kicking Bull” or something like that and one of the warriors that eventually becomes friends with John Dunbar (“Not Dumb Bear!” Costner’s character’s English name.) was “Wind in his Hair.” 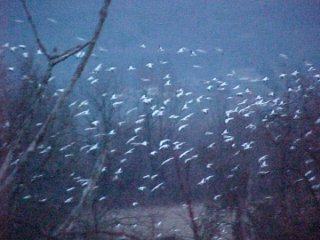 The introduction of the “Dances with Wolves” concept into the whole Snogie affair was pretty funny. We came up with some pretty funny names. For me it was interesting too because I had just watched this movie on New Year’s Day. (Not that there is any New Year significance in that movie. Just thought I’d mention it.) One of the funniest names came out when we decided to be really crazy and run across the fields to see the Snogies close up. Tim had been holding a birthday cake while we were riding in the car. When I agreed to run across the fields, leaving my adult concern about trespassing behind, we opened the car doors and started to hop out. Sarah said to Tim, “Hey! Make sure you leave the cake in the car or else we will have to call you ‘Runs with Pastries!'” That one was the best!

We ran across the fields, about the length of a football field. We stood behind the tree line to get some pictures before the Snogies spotted us. It was only a matter of minutes before they did spot us. The noise of their honking and the sound of all those wings flapping all at once were unbelievable! It was an awesome sight to see so many birds take off! They flew away from us for several seconds. Then they all turned to the right and circled back! “Uh-oh! Now they are really going to spot us! Cover your heads!” We ran like crazy back across the field. “Aaagggghhhh! It’s just like that movie ‘The Birds!'” Halfway across the field we realized that the Snogies had turned back from us at the tree line.

We drove away in laughter.