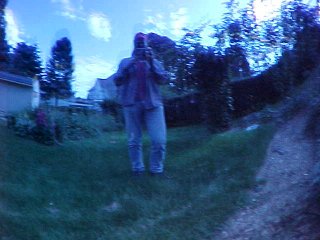 JOE PERRY’S slide guitar licks are bending the sound waves and I am sliding back to age 14 right now. Yeah, it’s Aerosmith again. I have not listened to much music lately. But at lunch today I was telling someone about how different I was way back when. They found it a little hard to believe. But I was certainly a different person then. “Draw the Line” seems like the appropriate background music for this article.

It was in ninth grade that I participated in my first “Battle of the Drummers” when our school jazz band played a concert before the whole school. My competition was this rather dorky kid, greasy hair, plaid pants, button-down shirt. His drumming was tight though. For a dork, he was pretty fast. I can’t remember his name. Technically speaking, as far as rudiments and precision go, he was just a slight step above me. Drove me crazy! I wanted to be at the top! But I had something that he lacked. I had the whole rock-n-roll image thing working in my favor. On the day of the “Battle” I showed up in my normal faded ripped Levi’s and my favorite Aerosmith t-shirt. It was a black and white half-sleeve with the artwork from “Draw the Line” on it. I was nothing but long hair and denim. How could double-knit polyester ever compete? It was like Herb Alpert and the Tijuana Brass versus Steven Tyler and the boys.

I remember that just before our concert was to start, one of the cutest girls in our class came up to me. She was one of a set of twins that every guy in school was crazy about. She took a thread off of her coat, tied it around one of my drumsticks, kissed me and said, “That is for good luck.” I was the embodiment of rock-n-roll that day! I had the attitude. I had the sharp looking drum kit. I had the girls. The dork had the rudiments. I had the hair and the attitude! When we battled, everyone politely watched when it was his turn. When it was my turn, the lights flashed, the walls shook and a zillion girls screamed. Still happens when I walk into a room now and then.

IT WAS NOT all fame and glory back then. There was confusion, fear and frustration as a teenager. There were insecurities. There was even a short period when I thought I was losing my mind. It happened one day as I walked down the hallway in school with my girlfriend. I suddenly thought to myself, “What if everything that I see, hear and feel is not real? What if it is all an illusion?” I had this feeling like I could put my hand out and tear through what I saw to reveal what was truly there. I remember feeling like I was floating through life at that point. It was so unnerving! Nothing was real! It was all a big joke, all a big trick that all the non-real people around me conspired to pull off at the expense of my sanity. My mom even took me to talk to a shrink. What was his advice? “When you feel anxious and a little crazy, go play your drums.” I guess that is how I got so good. Insanity drove me to it! You have to be half-crazy to really succeed at anything in your life anyway!

AS I SAID in the beginning of the article, my friend could not believe that I was so drastically different back in the day. It kind of boggled her mind when I told her how cruel I could be to other people. My group of friends and I made it a habit of letting people know just how stupid, ugly or otherwise below us we felt that they were. I remember one poor girl who constantly went out of her way to be kind to me. Yet, every time she said hello to me, my response was, “You’re a dog.” And that was mild cruelty compared to some of the ways I treated people! When I look back on it, I don’t know how my friends and I didn’t get ourselves seriously hurt. We were a bunch of skinny kids picking on kids that were twice our size in some cases. I distinctly remember this big guy. We very affectionately called him “Boogerdy.” He was huge, dressed a little sloppily, and hung out with a group of real nerds. We said horrible things to Boogs! We threw food at him during lunch. We made comments about buffaloes being in his family line and other assorted obscenities.

Somehow I managed to make it into my junior year of high school without getting killed by any of the people that I ridiculed. In the middle of that year my life changed quite unexpectedly. I became a Christian. Maybe I will relate that story some other time. For now I will tell you that my whole perspective on life and people changed. Before I knew what really happened to me, I found myself caring about people. I found myself talking to people whom a few short months before I would have rather died than even acknowledge their existence. The girl who always said hello was no longer an animal but a person with a name.

During this time of my life I found a whole new group of people to be friends with. It was a little hard for me to fit in at first. You have to remember the whole rock-n-roll image syndrome. I found myself associating with people who were dorks. People who were intelligent. People who were not afraid to care about other people. People who were not so concerned with their own coolness. They accepted me. I knew their acceptance was genuine when I attended a home Bible study for the very first time. It was being held at a friend’s house. After ringing the doorbell, I could not believe who opened the door. It was Boogs! Before I could say anything or run or disappear, he shook my hand and said, “Good to see you!” I just wanted to crawl under the welcome mat and hide in shame! We became friends and he never, ever once mentioned even one of the many unkind things that I did to him. Shortly after that night, when I was talking with Boogs in school, one of my “best” friends stopped and said, “How can you even talk to him? He’s so stupid and ugly!” I said, “It just doesn’t matter anymore, man.” He didn’t get it and soon thereafter he didn’t want anything to do with me.

SO WHAT is the moral of the story? Long hair and Levi’s are better than greasy hair and double-knit plaid? He who has the most girls wins the drum battle? No. The moral is that he who has the most heart wins. He wins happiness. He wins friends. He might lose associates who do not know how to be friends. But he wins much more than he loses. He enjoys much more than he suffers. He adds depth and satisfaction to his existence. He adds quality to his character. Without heart, whether you are a dork or a rock star, you are nothing. That is where we must “Draw the Line.” The line is drawn at the issue of our hearts. Got heart? It does a body good! It looks good on ya! A heart is a terrible thing to waste.