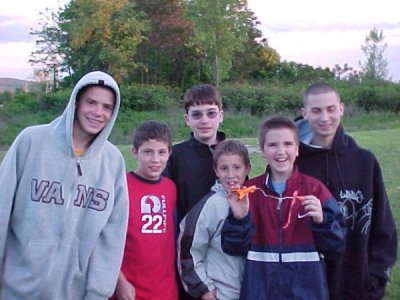 “HEY, UNCLE SAM! Can you come over before it gets dark tonight? I want to do something with you that you used to do when you were a kid.”

“Uh-oh! Nephew P, are we going to get into trouble? You didn’t get a slingshot did you? This wouldn’t have anything to do with rocks and windows, would it? Are any animals involved? You know, those animal rights activists will be after us!”

MUCH to my delight, when I arrived at Sister C’s house, my nephew came out with an Este’s model rocket! Awesome! Let’s go to the moon! After all, I am going to be an astronaut when I grow up! And that’s what my business card says too- “Sam Snyder: Astronaut/Rockstar/Writer”. See!

We went off to a nearby field, picking up a few neighborhood boys along the way. Nephew P got the nickname “Homer” after Homer Hickman of “October Sky” fame. T became our launch pad technician. The whole group became the “Rocket Boys.” I became the NASA technical consultant as well as the official photographer. It was a perfect evening to fly rockets. It wasn’t too chilly or windy out. The sky was mostly clear. The moon was directly overhead. All systems were go!

THE FLASHBACKS to my younger days were nearly overwhelming. I had forgotten the feeling of being a kid and being free. All that mattered to the boys was seeing the rocket zip through the sky. They weren’t worried about time or money or much of anything. Where did the days go when I used to spend hour after hour building and flying model rockets and following other boyhood pursuits? As soon as we used up all of the rocket engines, one of the boys said, “Let’s play baseball.” They quickly ditched the slide rules and pocket protectors of the scientist and donned the caps of sports heroes. I envied their freedom of heart. 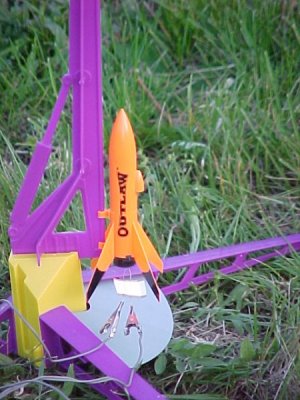 Flying model rockets was a passion for me as a kid. I discovered them when I saw an ad for the Century Model Rocket Club in the back of a comic book. I was in fifth grade. Joining the club was so exciting! I used to peruse the rocket catalog day after day and just dream of the possibilities of building the biggest rockets. I would order my rockets and check the mailbox every day until they arrived.

MY FIRST rocket was very simple. Basically, it was pre-printed cardboard that I only had to wrap around and glue to the nose cone. The engine slid into the nose cone. It looked like a nose cone with a skirt! The first time we launched it the engine and nose cone took off and left the skirt behind on the ground! It was a naked engine with a point on it!

Later rockets became more involved and intricate. The most fun was in designing my own rockets. I purchased lots of rocket parts and planned out lots of different designs. I spent many painstaking hours cutting and sanding balsa wood, gluing the fins onto the fuselage perfectly even, painting and applying decals of American flags. In my room there were always several rockets of various colors and sizes. I even had one with a clear payload. I thought about launching crickets into orbit with that one! 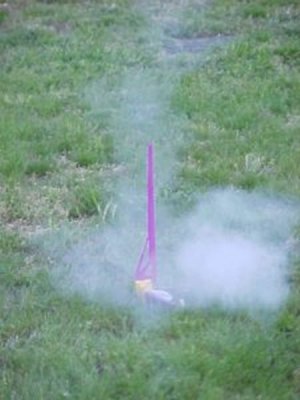 Were there mishaps on launch days? Sure! One time one of the rockets went so high that it seemed to take forever for it to come down. It drifted from the field behind our house all the way out over the highway in front of the house. I remember chasing it and seeing the cars slow down as it glided down barely above them. Another time the parachute cord snapped. The top half of the rocket came down like a speeding missile right into our neighbor’s horse corral! No horses were hurt but the rocket stuck into the ground quite a way. The most memorable incident was an explosion on the launch pad. I built a Taurus rocket from a kit. The payload and nose cone were larger than the body of the rocket. It was a big fat thing! We counted down. It started to lift off just a few inches from the pad and **BAMMMMM!!!!** The nose cone exploded right off and the payload melted like a blooming flower! It was awesome! Then it was depressing because all my work went up in smoke just like that. But hey! Every great rocket scientist has his bad days! Right?

EVEN THOUGH it only took us about 15 minutes to use up all of our engines the other night with Nephew P’s rocket, it was a blast! It certainly awakened something that was dormant deep inside of me. Now I have the fever again! I have to go by myself an Exacto knife kit and some comic books! There must be some rocket club for big kids like me!