OF RATTLESNAKES AND BROKEN SOULS 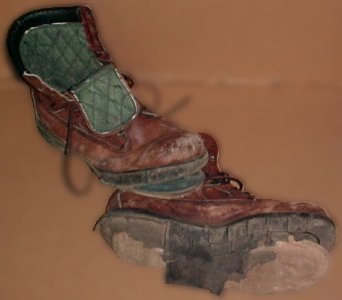 THERE are times when I man just needs to get away. It’s not necessarily a retreat as much as it is a regrouping. A time to think. A time to evaluate, sort through, weigh. He needs to get away from the chaos and the crowd. Turning his back on civilization for a time, he needs to seek out solitude and quietness.

By the end of the afternoon today, my soul was craving just this very thing. I felt somewhat broken, discouraged, tired. I had to be alone. It was 6:30 PM. A hot, hazy August evening in New Jersey. The sky hung low to the earth without movement. The sun was orange and declining.

THAT’S when the idea hit me. I needed to climb a mountain. The best one I know is Mt. Tammany at the Delaware Water Gap. I could make it there in a half-hour, hike as fast as I could and make it to the top to watch the sunset. The exercise would do me good. So off I went! The only preparation I made was to put my boots on. Which was not much of a preparation considering that there are a few worn out spots on the soles.

It is a 20-mile drive from Washington to the Gap. I could see the sun drooping down the bleary sky. Now it had become a race to get to the top of that mountain before the sun was gone. I walked across the paved parking lot and onto the Appalachian Trail at 7:12 PM. My bet was that I would get to the top just as the sun was setting.

TEN MINUTES up the steep trail and I was huffing and puffing like a mad man. That didn’t happen the first time I hiked this trail about 17 years ago! But I guess 17 years has an effect on a guy. So does the 30 extra pounds that came along with the 17 years.

Many times I have hiked at the Water Gap. Often with my kids or friends. Many times alone. Often on those solitary hikes I carry many concerns and cares. My back is laden with worries, fears, questions, frustrations. My mind is crowded with thoughts.

There is only so much a man can carry. He can only rise so high on the mountain with the weight of the world on his shoulders. He can only journey so far on the trail while he is pressed down and hurting inside.

AS I CONTINUED up the mountain tonight, slowly, singly, some of my cares began to drop off along the way. There was a nice breeze as I reached the higher levels of the trail. To some extent I felt as if the breeze was lifting my spirits, lifting my thoughts, and blowing away the lesser concerns in my soul. By the time I made it to the top of the mountain only two main things occupied my mind. They were thoughts of God and thoughts of a person. Interesting. I wonder how interesting God, so far above us, thought it was as I sat on top of the rocky outcropping, looking over the hazy Pocono Mountains, talking to Him about just one person out of the billions that live here below.

Yet, even at the higher altitudes in life, the concerns and annoyances return, just like the mosquitoes that were ever so happy to feast on my sweaty body. The sun never set. It just phased out in the murky grayness, a disappointment. It started to get dark. The insects were almost deafening. My feet were hurting because now both soles on both of my boots were broken. I needed to get off the mountain.

I HAD a small flashlight with me. But my eyes were adjusting fine to the steadily darkening woods around me as I walked. Every now and then I had to stop to push a sole back into a boot. I was just slightly nervous walking through the woods in the dark, mainly because of the abundance of insects all around.

I wasn’t too far along the trail on my way back down when it happened. Have you ever come within a few mere inches of stepping on a rattlesnake in the dark? Have you ever done so with half your foot exposed through the bottom of your boot? Did you know that the words “Holy Fuck!” shouted at the top of your lungs are an effective snake repellent? He rattled and hissed and started moving! I danced on my worthless boots and prayed/cursed in multiple languages at the same time! It was too dark to see which direction he was headed. So I gave up all hope of the two of us ever being buddies and ran as fast as my broken soles would allow. Downhill! Downhill! Downhill! Stumbling in the dark like a damn idiot!

Then I remembered the flashlight! What a difference light makes! While careening down the hill in the dark, the ground was covered with snakes, the woods were filled with hungry bears, and rabid raccoons lined the trail. But the light scared them all away, replacing them with the sticks and stones, logs and bushes that were normally there. I calmed down. The cursing stopped. But the praying continued to a degree.

I realized the analogy to other fears in my life. Truth and understanding so often dispel many anxieties. The anxieties wear down my soul. It’s amazing how I can revive when even a small amount of light enters my soul at times. Yet, it seems to be a lesson that I have a hard time learning. The uncertainties and unknowns of life often cause me to stumble, trip over things in the dark, sometimes fall.

IT FELT like it took a long time to get out of the forest tonight. Many of the concerns of the day were waiting for me at the bottom of the hill. But you never saw a man so happy to see a paved parking lot as I was tonight! I was happy to rejoin civilization and make my way home on the freeway. My spontaneous misadventure, which could have proved deadly, was over. I was drenched in sweat. My boots were trashed. My feet were blistered. Yet my soul was somewhat stronger than it was when I started.