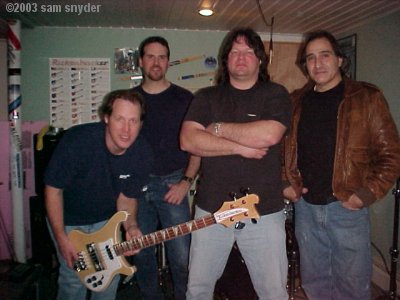 While in high school, I not only played in all the bands that the school had to offer, I also played in bands outside of school. For some of us, music was a passion. We played every chance we got. We played for school dances. We entered the “battle of the bands” whenever we could. We played school talent shows and whatever gigs we could get anywhere else.

I was in my freshman year of high school when I was asked to play with my first rock band. It felt odd to me because all of the other guys in the band were well known athletes in school. I was just a drummer. I had no other claim to fame. I did join the chess club once, for about five minutes. But something told me it was not going to be a very good way to get girls. You know what I mean? So I joined this band with three jocks. We sucked. We played some Creedence Clearwater Revival, Styx, The Beatles. We sucked. Included in the suckiness was myself and a guitarist by the name of Greg Howe.

The jock band did not last very long. Soon after, I hooked up with my friend Glenn Vasko and a bass player by the name of Jeff Young. Then we played ZZ Top, Pink Floyd, Emerson Lake and Palmer, Molly Hatchet, and more. By our junior year of high school we were joined by several other guys, including Greg Howe. By this time Greg was phenomenal! It was an amazing what two years could do! He played “The Clap” by Yes before the whole high school that year and blew us all away. Greg is a successful guitarist to this day.

Once we played for someone’s cousin’s birthday party or something like that. Most of us in the band didn’t really know what the event was at which we were playing. It was held at a VFW hall in Great Meadows, NJ. We got there early and hung out at a small diner nearby. Like all true rock and rollers, we trashed the place. Well… Okay… Not really. But we did write our names on the table with the ketchup. And we did smoke cigarettes. So that kind of counts. When people arrived for this party and were somewhat dressed up, we were a little confused as to what was really going on. When they asked us not to play so loudly, we knew the whole affair was not going to be much fun. It wasn’t. We were barely tolerated.

We also formed a “super group” in our junior year of high school and entered a battle of the bands at another high school close by. We had Greg Howe and Glenn Vasko on guitar, Jeff Young on bass, Craig Negoescue on keyboards, Chris Swanson and Arnie Howe on vocals, and myself on drums. It was a great time. It got a little weird though when Chris Swanson stood on a chair while singing and started to take off his pants. Much to everyone’s relief, he had a pair of gym shorts on underneath. We came close to winning the competition but lost to a band who played mainly loud, raunchy AC/DC songs. Nothing wrong with that. We found out later that they were actually a band that had been playing in bars for some time and had more experience, something that was actually against the rule of the battle. Oh well.

By our senior year, Glenn and I had become Christians. We came to know Kevin Gallagher, who played guitar, and Rich Demeter, who played bass. So the four of us got together and started writing songs. Kevin seemed to be an endless source of guitar riffs. He came up with music for a catchy sounding song. Rich and I wrote the lyrics. It was titled “My Friend.” It was about the issues that most teenagers face, the confusion, the peer pressure, the anxiety about the future, the drugs and illicit sex, and how Jesus understood it all and could help. I remember that we wrote the words on a paper grocery bag late one night. We played the song for the entire high school at a talent show. It was a great feeling to perform our own original song.

After high school, Kevin and I played together in a Christian band called Illumination. We played quite a few places in New Jersey and Pennsylvania. We had some good shows and some fun times. A rather strange show that we played took place in the center of a circle in Easton, PA. The drums were set up on a riser right next to the street. Looking over my shoulder as I played I could watch the cars drive past me. If I would have fallen off… well… You wouldn’t be reading this right now, would you?

So, I was 22 years old when I stopped playing drums. It was partly because I was unemployed and had no money. It was also due to the fact that I was going through a time of questioning what my life should really be about. I felt that there may be a higher purpose for my life. Maybe rock and roll was preventing me from fulfilling some “calling” on my life. I seriously considered going into the ministry at that point. So, in a way, selling my drums and stepping away from it all was a way to find out if there was something else I should be focusing on.

I never did enter the ministry. I never did receive some “revelation” of a higher calling. But I did come to realize that there were many high purposes for my life. Many painful experiences showed me this. It took time, much time. I went down paths that I never ever thought I would. Many who I trusted failed me. Some of the deepest desires and dreams that I had were denied. At 22, I was planning on cutting a straight and upward path through life. Since then I have walked winding trails through deep valleys and over high mountains, along fearful cliffs and through deep cutting thorns, in the sunlight and in the darkness of night. Life has not been at all the way I thought it would be. Thank God.

Now, after 18 years, the path has turned again. Once, probably 15 years ago, when I was a single father raising three toddlers, I bought a pair of drum sticks and said, “One day…” This year that day finally came and I bought a new drum set. I had waited for 18 years. A few times during those years I sat down at other peoples’ drum sets and played a little. It was always too emotional and I never played for long. What a feeling it was to bring home a drum set of my own again! The desire to play had never left me, neither did the talent. The 18 years proved to be a detour and not a final destination.

In May of this year I began to practice and perfect my skills again. In October I began auditioning for bands. By the beginning of November I found a group of guys that I felt I could work with and fit in with. (Yeah, that’s them in the photo. Pretty ugly, huh?) In a six month period I went from not playing for 18 years to being part of a band making original music with an invitation to add my own creativity to the mix. In just a few days from now, we will be going into the studio to record close to a dozen songs for a demo CD. And the band is called? Well, you know those little lawn gnomes that people have in their yards? That’s right, the ones you just feel like running over with your car and leaving in your dust. (Admit it! You do have those aggressive anti-gnome tendencies like the rest of us!) We are “Gnome Dust.” It won’t mess you up like angel dust. And it won’t make you fly like pixie dust. It might make you bang your head a little and leave your ears ringing for a while. But that’s about it.

So that’s the story. That’s where I am at. This entry says it’s a “conclusion.” But it’s not. It’s really a new beginning. I am looking forward to so much more to come. 18 years is a long time to wait for something. Now it means so much more each time I pick up a pair of sticks. Drumming is something I was born to do. It is something that I am privileged to do again at this time in my life. Each time that I play, whether in practice or in performance, my entire being will be poured out in the effort. What I do, I do with my whole heart. For who knows when the path may turn again.

Published On: July 7, 2003
(Originally posted on the website Continuum...) WARNING!! FOUL LANGUAGE APPROACHING!! Just got this in a CNN Breaking News email... "U.S. offers $25 million reward for information leading to capture of Saddam Hussein, or proof of his death, officials say." I'm sorry, but 25 MILLION fucking dollars?????? Pardon my Arabic, but that's a lot of money! Why not spend it on Continue Reading →