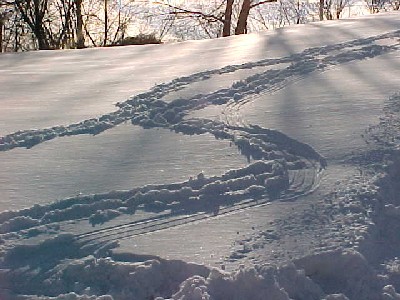 The teacher called it “a little disturbing.” But she gave him a good grade. I think it’s pretty funny and creative. I laughed hard when I read it. The students were told to write a creative story in class when presented with a photo of a kid on a sled. Here is the misfortune of Bob, Bill, Ben and Brian. A short story by my son Tim…

THERE WAS this nice winter day. All the kids were out riding their sleds down big hills. But eventually the hills they usually ride on were not as exciting as they used to be. So they went in search of an even bigger hill.

The kids walked and looked for hours but didn’t find any hill that gave them even the slightest rush. Until… they walked to the top of “Suicide Mountain.” Now they were thrilled at how steep, how high, how windy, and how fast this hill, or rather, mountain would be.

There were four kids that went up there that day. Their names were Bob, Bill, Ben and Brian. They all argued about who would go first. Bob was the bravest of them all and volunteered to do it. Then Brian said, “Oh! I’ll go second.” Ben said that he would go third. Bill said that he would meet them at the bottom. He said that he was walking back down the trail because he was scared.

Bob splattered his face and everything in his head up against a beautiful evergreen tree at an amazingly high speed. It was horrible! It was like a reenactment of Sonny Bono, but on a sled.

Brian, being right behind Bob, witnessed the whole thing. He had to avoid hitting the tree as Bob did. So, he made a sharp turn. Ben was right behind him and followed his trail. What they didn’t see was that they were heading off the side of a cliff. Before they could do anything about it, they were flying through the air, about to be exploded on the concrete below.

Bill had just made it to the bottom of the mountain and was waiting for the others to finish. Out of nowhere, Bob and Ben both landed on top of Bill, killing him and themselves instantly.

So, I guess that is why they call it “Suicide Mountain.”