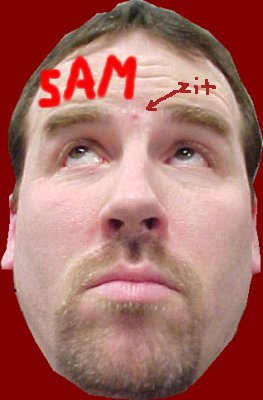 RECENTLY I completed an interview for an online forum that I participate in. I decided to post my responses to four out of the five interview questions on my site as well. This is the first of four journal entries based on these questions.

QUESTION 1. Your personal journal, weblog, and photography live on the same domain with your business site, and you use your real name (at least, I assume it’s your real name) in both places. Many people choose to fragment their online lives and use pseudonyms. Did you consider and reject this approach? Have there been any particularly positive or negative reactions from people who know you offline finding you online?

“Hello. My name is Inigo Montoya. You read my weblog. Prepare to die.”

Okay! Okay! My name is really Sam Snyder. Yes, I do use my real name on my site.

I considered using a pseudonym but I thought it would get too complicated. I thought I would eventually give my identity away somehow anyway. So I gave up on the idea fairly quickly.

By using my real name I put myself in a position that requires honesty and sincerity. Writing with sincerity in an open manner is the main thing that I set out to do when I started my online journal. I have been through a lot in my life. (Just a glance at questions 3 and 4, even without the answers, will show that.) I survived most of it and still have a good portion of my sanity and all of my sense of humor. As I began to heal over time, I maintained the view that there was a purpose behind what I experienced. As I interacted with others and began to open up and relate my experiences to them, I often found that I could be an encouragement and a support to others going through difficult times. It is this type of openness and sincerity that I attempt to convey in my online journal writing. Judging by some of the emails I’ve received, I have been fairly successful in the attempt.

I suppose that using my real name on my site and writing openly have exposed me to some risks. They have been minimal so far though. The worst of the negative experiences has come from an ex-girlfriend. She posed under a different name a little while back and contacted me through my site. I always try to reply to emails that people send when it concerns my writing or something on the site. So I answered this person’s questions and there were several emails exchanged over the course of a few weeks. However, this particular girl has a tendency to be spiteful and I soon became suspicious of the emails. In the end it amounted to nothing more than an annoyance.

On the positive side, I have had a few people who used to know me find my site. One of them had moved away several years ago. She came across the site and somehow tracked my phone number down. Her call came on a particularly dismal day and really brightened things up.

A drawback in using my real name is that I cannot always be as direct, severe, revealing, etc., because people know who I am. There are people who know me personally, like my mom, who read my site. There are co-workers who read. There are some friends with various religious beliefs and moral sensitivities who read. While I completely believe that a writer has the right to freedom of speech, I often choose to limit my freedom so as not to offend or embarrass some of these readers. Personally, I have no problem with a writer who uses vulgarity to express themselves, or writes about issues that some may consider taboo. F***! I do that once in a while myself! Now, even though I just censored myself, I know that I made a few of my readers squirm a little and wish I hadn’t used the word “FISH” before that last sentence. I cannot please everyone all of the time. (God knows I’ve gotten plenty of flack over my “pony roasting” spoof!) I will not write to please everyone. But I do try to tone myself done a bit since I interact offline with some of my readers.