WHEN I’M BORED, I PICK UP GIRLS AT THE AIRPORT 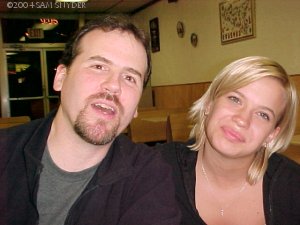 SOMETIMES you just need to spend a little time with some good friends. It doesn’t matter what you really do. When you are down and feeling a little worn out from it all, to be around friends can be the best antidote. Throw in a few drinks because you don’t have to drive. Add a lot of laughs. The result is a relieved and lighter heart.

So, tonight I had the opportunity to hang out with my friends Pete and Ruth. It all came about because I received a few photos that I purchased from someone through eBay. They are photos of Johnny Cash when he was arrested in 1965. A few days after buying the mug shot photos of Cash, I got an email from the seller saying that I got lucky because the lawyers for Johnny Cash’s estate got a court order to prevent them from selling any more of the photos. I was more than lucky. I got a second copy for Pete, who is the biggest Johnny Cash fan in the universe. He and Ruth came by, with a bottle of Pete’s homemade wine. That was a fair trade for a few unique photos of the Man in Black. 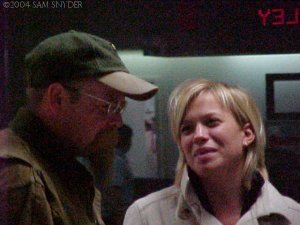 Pete and Ruth were on their way to Lehigh Valley International Airport to pick up Ruth’s daughter, Joanie, “the little blonde girl from Cell Block A.” (As you can see by these photos, her mug shot is much cuter than Johnny Cash’s.) I decided to tag along with Pete and Ruth. Certainly an airport would present Pete and I with ample opportunities to goof around, especially with my digital camera in hand. There was a large sign for a natural gas company on the wall. We had a pretty funny idea for a picture. But we just couldn’t get up the nerve to have Pete pose for a natural gas spoof when there were three old men sitting in front of the sign. 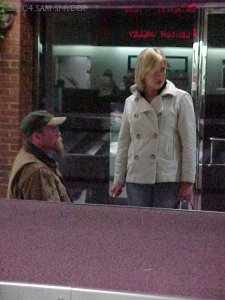 Joanie was flying back from Connecticut and apparently had to go by way of Albany and then Philadelphia before arriving in Allentown. She probably could have driven home faster! By the time she got off of the plane, she was tired and cranky and face to face with Pete and me! Of course, we teased her right away. We teased her more when we realized she was cranky. Pete stood on one side of the luggage return and harassed Joanie, while I stood on the other side and took photos. All in all, she was a good sport about it and said she was even looking forward to seeing some of the photos on the website. Here they are! Who am I to disappoint a lady?

After the airport, we drove Joanie back to “Schmutztown” where she goes to school. I hop out of the car when we arrived and volunteered to do the manly thing and carry Joanie’s luggage into her apartment. Pete opens the trunk and does the smart thing by giving me the largest bag to carry. The next thing I knew I was looking up the longest, steepest flight of creaky old stairs I ever saw. Luckily, Joanie was in front of me going up the steps so that she didn’t see my body shaking from the strain of the two-ton bag on my back. But she did hear me say, “I think I can. I think I can,” about three quarters of the way up. Not very impressive. 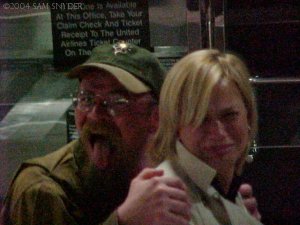 A door at the top of the stairs opened into a kitchen. There I found myself old and completely out of breath…before a room full of cute, young college girls. Not very impressive at all. When one of the girls asked Joanie who I was, I couldn’t hear her response. I’m sure it was something like, “Oh that’s just Sam, one of my mom’s boyfriend’s nut-job friends who runs around with a digital camera. Don’t pay any attention to him.”

The first thing that Pete and I found amusing was the fact that the preferred drink of these college kids was Boone’s Farm wine. Now, you know that any wine that comes with a screw off cap cannot be very good. But it is cheap! To college kids, that is all that matters. Quality does not matter so long as there is enough alcohol to get drunk with. It doesn’t matter if it’s cheap wine or after shave lotion when you’re in college. 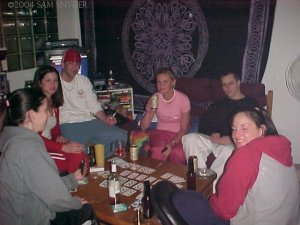 The second amusing thing was one of the guys (the one with the red hat in the photo) who showed up right after us and made a comment that he could out drink me anytime. This kid had some good wine stashed away in the fridge. I guess I made some flippant remark while he was pouring a big glass for me and he took it the wrong way. He got all flexed up and boasted that he could out drink me. Pete and I looked at each other and burst out laughing. “Right… Just pour me another glass of wine there, Sunshine.” I then clicked off a picture of the kids that were there, told them that it would be emailed to all of their parents, and that the authorities would arrive at the apartment within the hour. The look on their faces was priceless. Go ahead! Out drink me! Just remember… I have a website and I’ll make you look stupid in the end! 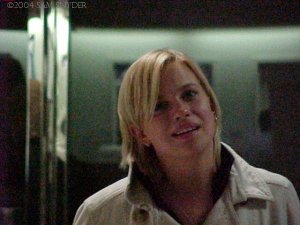 We ended the night with Joanie by having some pizza at a place near her apartment. It was rather tasteless. Pete and I had to heap on the oregano and garlic to make it taste like something other than bland cardboard. I think we were too far west. Something happens to pizza when people try to make it anywhere outside of New York City and New Jersey. Once you cross the Delaware River and get into Pennsyltucky, forget it. You will never have good pizza.

And there ya have it! Nothing but pure excitement, huh? 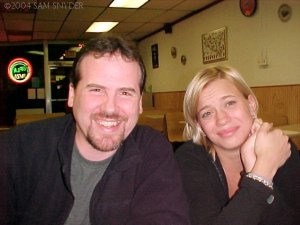 Published On: October 25, 2008
(Originally posted on the website Heron Flight) The sport has a way of turning your world upside down. Practices at least three times a week. Games every weekend. (Five-year-olds need the intensity.) And poor communication to boot. Today we were halfway to the game that was 25 miles away when we got a call that it was canceled due Continue Reading →