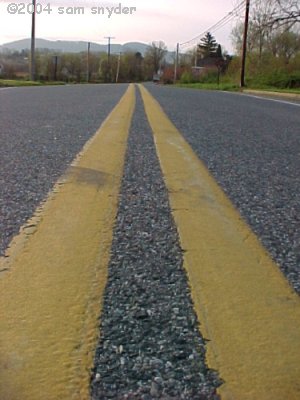 I RECEIVED AN EMAIL from classmates.com this morning. I signed up with them a few years ago. Periodically they send emails stating how many new people signed up from my graduating class. Usually I don’t bother checking it out. This time there were quite a few new people. So, I logged onto the classmates.com website.

An old girlfriend of mine from high school signed up recently.

Just a minute. I should clarify that. Another girl recently took issue with me. “It’s EX-girlfriend. Not ‘OLD’ girlfriend.” Whatever.

So, I found a former girlfriend’s name listed on classmates.com. I admit that the times I’ve logged onto the website in the past, I looked for her and a few other girls – a few who were ex-girlfriends, a few who never had the privilege. There this one sits, right there with a button that says, “Send Her an Email Now!”

“NOW?” What in the world would I say? How do I bridge the gap from 41 back to 17? Sure, I’ve thought about this particular person a million times throughout those years. But those thoughts have been about a high school girl, not a woman with three kids living in a far off state (according to her online profile). What do I say?

“Hi! Remember the freshman prom we went to when you looked so pretty in that gown and I looked like a dork in that blue corduroy suit?”

“Hi! I was just wondering if Stairway to Heaven was still ‘our’ song.”

“Hi! Why DID you kick me in the crotch and dump that soda over my head shortly before we broke up?”

“Hi! I am sorry I cheated on you that one night. But I don’t really have to say that because I did give you flowers the next day.”

God! It was all so long ago! So far away! It felt like so much was permanent at the time. That was a fallacy. Things were moving. Things were changing in bigger and faster ways than we thought. The instant we took something for granted, the momentum of life pushed us down the road. That which was taken for granted slipped through our fingers before we even realized that we had lost our grip.

This was the first girl that I really fell in love with. I felt it as soon as I saw her the very first time. Beauty is in the eye of the beholder. Both of my eyes agreed that she was beautiful. I liked everything about her: the way she smiled, the way she talked, the way she pinched me when she got mad. I wrote a million love letters to her, gave her flowers, jewelry, and perfume. We even had shirts made that said, “Sam Loves Girlfriend-on-classmates.com.” THAT is some pretty serious love!

I didn’t get this girl without a fight though. She had broken up with another guy a few weeks before I met her. He became a jealous maniac when he found out about me. For several weeks he threatened to “kick my ass” and “beat the shit out of me.” Therefore, I threatened him right back. We would pass each other between classes in school. He would be on one side of the hall and I on the other, a mob of kids separating us. “I’m gonna get you after school, Snyder!” “Bring it on, ex-boyfriend-of-girlfriend-on-classmates.com, you faggot!” We never touched each other. It got to the point that the mob of kids would just roll their eyes when he and I started yelling at each other. It was all just talk. Loud talk.

This girl and I “went out” for two and a half years. In high school terms, that is a long time. Translated into adult years, that equals at least six years, by my estimation. We saw each other each day in school. We spent nearly every weekend together. We talked on the phone every night. In fact, we both had our own phone lines in our bedrooms. So each night we would stay connected on the phone while we slept. Most married couples don’t even leave the lines of communication open like that. (Okay. That was a dumb joke.)

During one’s teenage years, there are so many factors causing much confusion. There are hormones, zits, peer pressure, parental pressure, low self-esteem issues, exaggerated self-esteem issues. It’s a whirlwind, dragging you down the road of life when you don’t even know if you want to go. One’s judgements are ill informed. One’s hopes are idealistic. Many foolish things are done.

Yes, I cheated on this girl. Once. I kissed another girl after school one day. I was practicing my drums alone in the band room. The other girl came in and wanted me to play for her. A dangerously flirtatious association had been developing between us for some time. “What will you give me if I play for you?” “What do you want?” I played. We made out… while her boyfriend was out back at baseball practice.

Don’t worry. It caught up with me that very night. No, her boyfriend didn’t find out and beat me up. Instead, a totally unrelated incident happened with someone who didn’t even know what I had done that day. He beat me up. It was more embarrassing than it was painful. He was bigger and tougher than me (still is to this day). I don’t remember all the details of the fight. But I do remember that somehow he flipped me upside down, held me up by the ankles, and used me as a battering ram to open the door. I kept swinging though! However, the whole incident felt like some kind of instant retribution for my sneaky afternoon tryst. While our phone lines were still connected, in the middle of the night, I pressed the buttons until my girlfriend woke up. I confessed what I had done. She cried and hung up the phone.

A year later we broke up for different reasons. I am the one who ended the relationship because I was going through a lot of changes. I was being led down a different road. My thinking was changing. My heart was changing. Rather than fight and argue, it was better to end things and move on. It wasn’t easy. There were a lot of attachments between us. It killed me when I saw her with another guy in my senior year of high school. I didn’t becoming a raving jealous lunatic, just a quiet one. I had to walk the road I chose.

Now, the question is, should I click that email button?