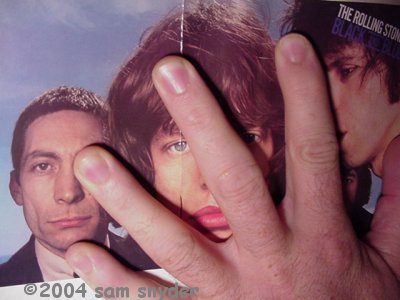 THERE’S NOTHING like getting an album that you used to listen to when you were a kid and haven’t heard in years. Of course, most kids don’t refer to them as “albums” these days. They are just “CDs.” It’s a rediscovery of sorts when in 2004 you buy an album that was originally released in 1976. Unless, you weren’t even born yet in 1976 or were still a snotty-faced four-year-old who didn’t care about music yet.

The album of my most recent rediscovery is “Black and Blue” by the Rolling Stones, which is playing right now. It may not be one of their most popular albums. It does have the song “Fool to Cry” on it, which was a big hit at the time.

So much music defines different time periods of my life. I was 13 when I first got this Stones album. When I think back, there are several other albums that I remember listening to a lot around that time: “2112” by Rush, “Changes One” by David Bowie, “Rock and Roll Over” by Kiss, “Alice Cooper Goes to Hell” by Alice Cooper (obviously). I would often sit in my bedroom with a black light on and listen to these albums. I had a red, white and blue bedspread. I can still picture the glow of the white sections of the bedspread as “Hey Negrita” plays now in 2004, transporting me back.

I was in eighth grade then, with my Speed Racer looking glasses, double knit pants, and slightly visible peach fuzz moustache. It wasn’t until the next school year that I began wearing jeans and the ever-cool silk shirts and growing my hair long. Thirteen was the last year of “cute,” soon to be followed by the arrival of “cool.” It was an awkward time in which impressing the girls was of growing importance. Yet, riding my pull start Kawasaki mini bike for hours after school was still more fun, and safer than girls turned out to be, I might add!

Ahhh! Right now the Stones are taking me back to an old house along the Muskonetcong River. It was so old that you could look between the floor boards upstairs and see down to the first floor. The basement had a dirt floor… and rats. We didn’t go down there! There was a winding staircase from the kitchen to a small room upstairs.

There was plenty of land along with this house. The property we rented ran along the river for a good stretch. There were fields to ride mini bikes, pick wild raspberries, play frisbee, and run naked if you really wanted (not that I would know anything about THAT!). There was a great hill for sleigh riding in the winter. There was an old mysterious barn. There was a spring house close to the river in which I sometimes put trout that I caught out of the river. Then I could fish in the spring house and catch them over and over.

I remember doing a few mischievous things at that age. Stupid things really. I cut the inner pages out of a book in order to hide packs of bubble gum so my mom wouldn’t know I had them. I was a big candy freak as a kid. The only problem with hiding them in a book was that I used a book that once belonged to my mom as a kid. She discovered the cut out pages in the garbage can. Ooops. I also flushed a banana peel down the toilet because I was too lazy to take it downstairs to throw it away. The only problem was the toilet clogged a while later and my stepfather discovered the banana peel when he was plunging it. Ooops again. I also remember how my sister wiped out on my mini bike in the gravel on the driveway. Ooops. And ouch. But I was more concerned with the possibility that my mini bike got all scratched up than I was with the probability that half of the stones on the driveway got jammed under my sister’s left knee cap. What can I say? I’m a brother.

Speaking of my stepfather, there were a few funny incidents in which he was involved back then. Once, in the middle of the night, some guy was pounding on our door. Then he backed into my stepfather’s truck with his car and took off. So, my stepfather chased him. Later, at the police station, a cop came in and read him his rights. When he asked what was going on, the cop said they had found marijuana growing on our property. Ooops! It turned out that the caretaker of a neighbor’s property was the one who had planted it on our land. In another incident, we all got in the car and drove up the road to the Dairy Queen for ice cream one evening. While there, somebody backed into our car in the parking lot. My stepfather had to get out of the car. And the poor guy was wearing my mom’s fuzzy pink slippers! Oooooops! Okay. He wasn’t in the habit of wearing her clothes. He wasn’t a cross dresser or anything. He only had to drive a few miles up the road to the Dairy Queen. What were the chances that he would have had to get out of the car in front of a parking lot full of people? All those staring people! Work boots! Never leave home without ’em!

As I end this brief article, the Stones are singing “Memory Motel.” How appropriate. A good note to end on, while just giving you a glimpse of that particular time of my life.