B IS FOR MIGRAINE 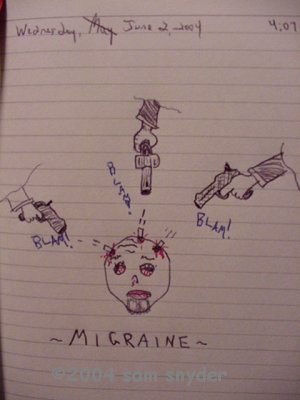 B as in blindspots.

B as in brain mush.

They wreck your day.

My morning started off fine. I woke up bright-eyed and bushy-tailed, even after only four hours sleep. (I know, B is for bozo for not getting enough sleep, as usual.) The ride to work wasn’t bad. I even stopped and took a few photos along the way. I got coffee with my usual coffee peeps when I got to work. Everyone was in a good mood.

Then I went to a training class at 9:30. By 10:15 I had spots in my eyes and could hardly see the PowerPoint slides. I scrawled out a note that said, “I’m dying. I have to go take medicine,” to a friend sitting next to me. But when I started to stand up, I got a cramp in the back of my left leg. I couldn’t move. It hurt so bad I thought I was going to scream. Not wanting to interrupt the class, I sat as still as I could and attempted to use mind control to relieve the cramp. (Think of Uma Thurman in “Kill Bill.” “Wiggle your big toe.” Only substitute hamstring for toe. “Wiggle your big hamstring.”) However, my brain was in mid-collapse. I drifted from control right into, “Gee, I wish I had a banana right now. Bananas have vitamin K or phosphorous or something that helps cramps. Oh! What I’d give for a banana right now! Does anyone have a banana?” I was able to regain some composure and slip out of the class without drawing attention to myself. I returned to my desk, choked down my pills, and plopped my head on my desk for 10 minutes.

Then the medicine kicked in. Ahhhhhh! It relieved most of the pain. But it doesn’t do anything for the fatigue and nausea. Another problem with the medication is that it is 500% caffeine. It’s a catch-22. My body is exhausted and wants to enjoy the comfort of a coma. But I get so wired from the caffeine that I can’t sleep. I can’t even sit still. I can’t stop talking and I get pretty goofy. (goofier) I also can get rather spacey at times while on the medication.

Today I became extremely hungry about an hour after I got the headache. I bought eggplant parmigiana with pasta and green beans from the cafeteria. I wolfed that down and was still hungry. So I went back downstairs to get a grilled cheese sandwich and rice pudding. There was no rice pudding, but I got the grilled cheese. 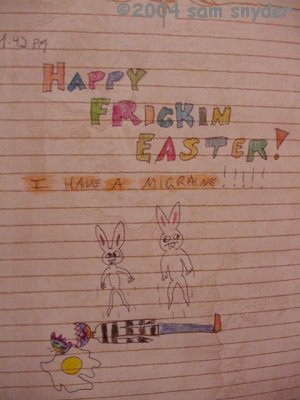 On my way back to my desk, I passed a meeting room in which several people were sitting at a table, including the friend who was in the training class earlier. As I passed, she raised her eyebrows at me. I was extremely spacey at that point and wondered why she looked at me that way. Then I remembered. I was supposed to be in that meeting! Holy crap! I tossed the sandwich on my desk and rushed back to the meeting room. I was only five minutes late. Lucky for me, a few people were later than I was and the meeting had not started yet. Unlucky for me, I was extremely spacey during the meeting. It was one of the best corporate meetings I’ve ever had the privilege of participating in!

For the past few years, I recorded each time that I had a migraine. In my private journals I wrote down when I had a migraine, what the suspected causes were, etc. Of course, B is also for boring and rather than constantly recording boring migraine entries, I began drawing descriptive pictures when I had the headaches. They started out as basic stick figures/non-smiley faces, some with axes in their skulls or cracks in their foreheads. These evolved into more creative drawings. One is a scene of a Turkish executioner chopping my head off with a big blade. Another is a boot stomping on my head causing teeth to fly out of my mouth. One is two fat people squishing my head between their cellulite-ridden rear ends. My favorite is the one I drew when I had a migraine on Easter. My head looks like a broken colored Easter egg. The insides are spilling out on the ground while two Easter bunnies hop up and down on my body. It’s all part of my grand mission of turning misfortune into artful beauty. (Even though this article is devoted to the letter B, I don’t think I’ll tell you about my “blood art.” You might think it is blatantly bizarre.)

So that’s the babble for the day. Just a tale of a busted head. Now there is only one last B word in my head. (No, KarenD, it’s not ratty BRAS.) It’s BED. I think I better get to it.

An AlphaBytes Project – The Letter B