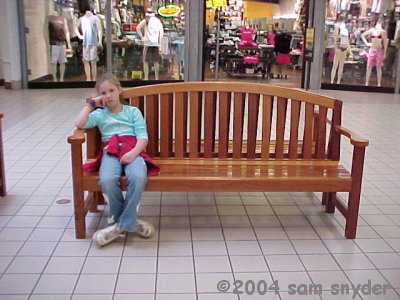 H is for “Hannah.” She’s ten years old, sharp as a tack, beautiful, and boy crazy. She wants to be an archaeologist when she grows up.

H is for “happy.” That is what I will be when Hannah arrives in just two days.

H is for “hard.” It’s hard to believe that any woman could look so bored, as Hannah does in this photo, when there is a clothing store right behind her! The issue of women and shopping came up in conversation with a friend of mine at work. She was telling me how burned out she felt. The responsibilities of motherhood have been wearing her down. It’s hard to function on just a few hours sleep after tending to a baby most of the night. I said that maybe she needed to get away from her desk at lunch each day, do something different, go for a walk, or just drive around and explore the area.

Her response was, “Yeah! Where is there a mall around here?”

I said, “Ah yes! Proof that you are a woman indeed!”

I’m telling you, when a guy is stressed out and in need of a break, the first thing that comes to his mind is not shopping! Unless, he thinks of shopping because he is in need of something specific that will facilitate some other form of recreational activity. Maybe he needs fishing lures, or film for his camera, or a new hat for the NASCAR race. But that is different. Men do not do recreational shopping. To men, shopping is a utilitary function in the process of reaching a much higher objective. The mall is a means to an end. The mall is never a destination in and of itself.

H is for “hell.” That is exactly what I am going to get now from a few women who read this website.

H is for “jalapeno peppers.” Well, not really, but by my ears it should be.

H is for “Hopi.” The Hopi are one of many Native American peoples. I am not Hopi.

H is for “Hansel and Gretel,” two German kids. I am German. Hurray for German kids!

H is almost for “Irish.” Hurray for Irish kids! I’m one of them too!

H is for “hullabaloo,” and “hornswoggle,” and “hoodwink.” Hurray for dictionaries!

H is for “Hey! That reminds me!” After writing an article about an old high school girlfriend in April, I received the nastiest email of my life! Wow! Whoever sent it (and I know who it was) was angry, angry, angry! They called me an a**hole. They said that I was “bad news to women.” They diagnosed me as suffering from “delusions of grandeur.” But I had to laugh when they used the word “hoodwink.” Somehow, hoodwink just doesn’t make it in a flaming email. It carries about the same intensity as when an adult swipes their hand over a toddler’s nose, then shows their thumb sticking between their fingers and says to the child, “I got your nose!” It’s a doting kind of word, almost affectionate.

H is for “Howdy Doody,” a freckled marionette who was the star of a TV show that first aired on December 27th,1947. What else would come to mind but freckled puppets after talking about hoodwinking?

H is for “Hurry.” And now that is what I must do because it’s time to pick up my son from work.

An AlphaBytes Project – The Letter H