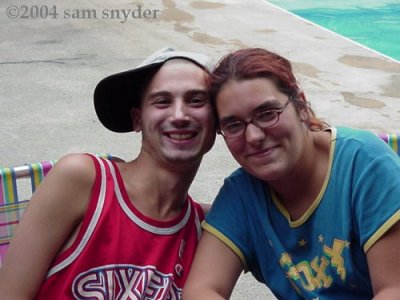 AFTER more than two months of not posting a journal entry, it feels awkward doing so now. Where should I begin? What should I tell everyone about? Much life transpires in two months.

One significant change in circumstances in our household is that my son Joel’s girlfriend has been living with us for the past month. Her name is Kayla.

Kayla is a nice girl, kind and easy to get along with. She’s respectful. She is thoughtful. She cares about our family, especially Joel, of course.

Joel needs that. He has had to face life with hefty disadvantages right from the start. By the time he reached school age, it was apparent that he had difficulties in learning. His speech was below the average level for his age. He was sometimes unruly and had tantrums for no obvious reasons. By first grade, it was determined that Joel had certain learning disabilities, especially in areas of communication.

It was explained that people with his kind of disability have a very hard time interpreting the communicative stimuli that we are all bombarded with. They may have difficulty understanding audio stimuli. Sometimes they may not be able to decipher facial expressions or body language. They may totally misread a person’s facial expressions and think that a person is angry when they are not. They may be dyslexic. As if all of that isn’t enough, they may also have severe difficulties in communicating their own thoughts, not able to speak or write as they would like.

Joel was in specialized classes all through his school years. Of course, kids in his situation are often made fun of by their more fortunate peers. I know. I did that to kids like Joel when I was young. I was one of the ones pushing them around in the boys’ bathroom, calling them “retard,” “sped,” or “spaz.” What I thought was “coolness” I now know to be merely cruelty.” Since those days, I have been humbled and broken in heart as I have watched my first child endure that type of abuse. I learned my lesson. But I digress on a tangent that deserves an entry of its own. Perhaps one day I will write that.

In addition to learning disabilities, Joel had to deal with other tough things early on. He had one hernia operation when he was only two-years-old, then another when he was four. Yet, perhaps hardest of all, was his mother’s drug and alcohol abuse, which ultimately brought about the disintegration of our marriage and family. We separated when Joel was only six. At the age of 12, he began to have seizures. Now at the age of 20, he still has them. He is unable to get a driver’s license and lives with the daily anxiety of the possibility that a seizure could happen at any time without notice. There have been lots of tough breaks for this boy.

I am happy that Joel has someone like Kayla at this point in his life. He is having difficulty holding a job. A local vocational agency for disabled people is helping him to find appropriate work. That is good and necessary. But Kayla adds a comforting, inspiring dimension to his life. It is good to see someone caring for him, enjoying his company and respecting him as her equal.

That leads me to something to mention as an aside on this issue. We say that people like Joel have a “disability.” They are not “able” to do things as most other people are. We find it hard to understand and live alongside people like this. We marginalize them because they don’t fit into our system well. We send them a message that says, “You can’t. You are not able. We don’t have time for you, to understand you and respect you, because we have to keep our big machine running. You just don’t fit in. So, step aside.” Thankfully, not all people are like this. There are those who devote their lives to researching the disabled, those who work hard to help them function in our society, those who are kind and patient, those who make it better for people like my son.

Kayla makes it better. Not for Joel alone either. She has touched each one of us. She bought hair ties and loofahs for all the girls. She brings coffee and bagels home after work for us. Today when I arrived home from work, Kayla greeted me on the porch with the words, “I promised that I would buy Chinese food for everyone tonight. I didn’t have enough money. So I MADE it myself instead!” The whole house smelled delicious! She made chicken stir fry with elbow macaroni and buttered rolls. Not quite the traditional Chinese dinner, but it tasted great. It saved a lot of work for me and even gave me the inspiration to write… finally!