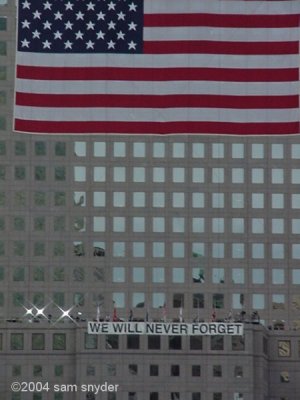 I CAME THROUGH the Holland Tunnel as the sun lowered in the sky over New Jersey behind me. The city was calling to me today. I just had to be there. I had to stand in that area where something so significant, so tragic, happened. All I wanted was to remember and reflect. I needed to be at Ground Zero, surrounded by the life of New York City and the people there. After taking care of several things at home, I went to the city with my son, Joel.

It’s an easy drive to Manhattan from our house. We live close to Route 78, which cuts right across New Jersey from Pennsylvania to Newark. From Newark, I take Route 1 – 9, over the Pulaski Skyway, the old, narrow, iron bridge over which people like to drive at 80 or 90 mph. Once over the Skyway, I am in Jersey City and right into the Holland Tunnel. That’s it, only 50 miles or so.

As always, finding parking in Lower Manhattan was no easy trick today. Eventually we found a spot on John Street. Parking on the street in the city always makes me a little nervous. It’s an old reaction that I have because my car was once towed in Manhattan. Back around 1985 or 86, when I was not very experienced at driving in the city, I went to pick up a friend of mine there. He had flown in from Minnesota for a business conference. When I parked near his hotel I didn’t realize that there was a no parking sign about 10 high and about 20 yards away on a light pole. We came out of the hotel, talking and excited to see each other. It was an awful feeling I had when I realized that we had walked pass the spot where I had parked the car and the car was gone! I called the police and was told that the car had been towed away and impounded near the Lincoln Tunnel. What a fiasco it was to get the car out of impound! A very costly fiasco at that! So now I check for no parking signs anywhere within seven miles in front or behind my car.

There were many people coming and going around the World Trade Center area. For the most part it was a calm crowd. People were reading the signs and memorials that the city has put up. Some people placed flowers on the fence, some lit candles, some cried. I overheard a few describing what the area was like before to some who had never been there while the towers were standing.

There were some things going on that struck me as a little odd today. At one point I heard a crowd yelling from a side street. They emerged with a police escort. At first I thought it was a political protest of some kind. I thought, “What a wrong time and place for that!” But it wasn’t a political protest. It was a religious one. Someone was carrying a sign that read, “I vote 4 Jesus.” Others were holding Bibles in the area. They all began to sing as they crossed the street. Led by two Catholic priests, they began to occupy a large section of the sidewalk along Ground Zero. They were shouting things about Jesus. It felt kind of out of place. There were others at Ground Zero who were passing out religious literature. One man was preaching that the end was upon us and that most of the human race was going to burn forever in the lake of fire soon. That seemed out of place and not very compassionate on the third anniversary of September 11th. I know the Bible verses the man was referring to. I am familiar with the theology. Under the circumstances of this day, I would have chosen to present a different side of Jesus. Why not preach of how He is the Good Shepherd? Why not preach of how enduring His love and comfort are to a people who are fearful of terrorism and the uncertainties of a violent world?

There were other oddities there today. There was a fire truck called the “Freedom Truck.” It had large screens on it upon which various photos from three years ago were displayed. There was a man with very long gray hair in a white suit who was shouting things through a bullhorn while a fireman drove the truck around the area. Then the truck stopped and the long-haired man stood on top of it and sang a song about world peace. He tried to work the crowd and get people excited. It felt like some sort of pop concert. It felt out of place.

One thing that went on there today really touched my heart and brought tears to my eyes. Several people were taking turns reading from a book which contained a few paragraphs about each of the people who died in the Twin Towers. The paragraphs were accompanied by a photo of each. When the person reading finished a portion about one of the victims they held the book up for all to see the picture and stated the person’s name loudly. Many people sat on the ground in a semi-circled listening to the readers. More stood all around. It was very moving.

Joel and I took our time walking around Ground Zero, taking pictures. I realized that the real subject of my photos was actually something that is not there. It’s the missing buildings and the hole in the ground that stand out. I took pictures of the sun going down from a spot where three years and one day ago you could have never seen the sun going down.

After our time at the Trade Center, we went over to Chinatown. There’s a little place on Eldridge Street that makes the best Chinese dumplings. They are cheap too! $1 for five fried pork dumplings and $2 for eight boiled vegetable dumplings. Plus, everything is made fresh while you are waiting.

As we made our way back around to Canal Street, Joel saw that the two towers of light which memorialized the towers a few years ago were on again tonight. That brought back a lot of memories for me. When I was spending a lot of time in the city a few years ago, those lights were on night after night. Sometimes I would drive by the area on my way out of the city. I was there at 2 AM on the last night that they were lit in April of 2002. Seeing those lights tonight reaffirmed that yes, those days of my life really happened and September 11, 2001 really happened. But we move on. Never to forget.

Published On: September 20, 2013
While doing the dishes today, I found a lentil which had sprouted in the dish drainer.  Such will to live!  Such ignoring of the odds and the illogical circumstances in which to take a shot at life!  Who was I to deny assistance after this one lone lentil made such a valiant effort? I planted it - in a Continue Reading →