REMEMBER WHO IS STANDING WITHIN EARSHOT 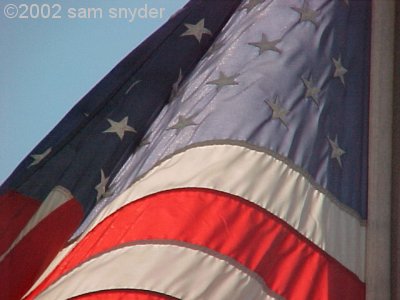 IN THIS ENTRY I would like to present the thoughts and experiences of two men who I greatly respect. They both served as Unites States Marines. They are father and son. William Seiple was my high school band director. He is a pastor at the Fellowship Church in Lopatcong, New Jersey. He has been a spriritual role model for myself and many others. He saw combat in the Viet Nam war. His son, also named William, experienced combat in Kosovo and Iraq. Pastor Seiple responded to my journal entry about the candle light vigil for those who have died in Iraq. He gave me permission to quote his words on the website. He also suggested that I contact his son for insights from someone who has seen the situation in Iraq firsthand.

I feel that the words of these two men warrant honest reflection. Many of the issues surrounding the war in Iraq and the upcoming American elections are not all that clear cut. There are many issues that I wrestle with and wonder which is the right way to resolve these issues for the good of our country and for all of those who love peace and freedom. I think that there are others who read these journal entries who also wrestle with these issues. So I present these words which differ from my appraisal of the current political situation.

Please let me state very clearly that in anything that I wrote in my previous entry referred to above I did not intend to give offense to any of our soldiers. I have nothing but respect and admiration for those who have the courage and discipline to serve our country in many selfless ways. It is true that the freedom that we enjoy has been purchased with the blood of many such men and women. I was moved by the younger William Seiple’s words that said that when those of us who feel we must give our opinion of the war in Iraq, “remember who is standing within earshot” when we do so.

First, the email I received from Pastor William Seiple:

I saw your take on the war and couldn’t disagree with you more. My son recently returned from Iraq after fighting in An Nasiryah during the worst of it and he also agrees with me. The American press has an agenda and is reporting only on the negative. Yes 1,000 men have died. Everyone of them should be mourned. Yes civilians have been killed. That is tragic. But don’t forget that there are mass graves still being uncovered containing the bodies of thousands of civilians who were murdered by Sadaam with WMD’s. What is reported by a biased press is only the negative. Actually most of the country is quite peaceful with hospitals opened, kids going to school, stores operating, and Christian churches, of all things, coming into existence. And the Gospel of Jesus Christ is spreading for the first time since Jonah and Daniel. [Nineveh was at Mosel, just north of Bagdagh.]

The dangerous thing about the liberal media and the politicizing of the war to get Kerry elected, is that Al Jazeera, the Arab CNN, reports everything negative that Kennedy, Kerry, et al are saying and it gives the dissidents encouragement to keep on keeping on. It was the same when Jane Fonda went to Hanoi during the Viet Nam war. No one knows how many American soldiers were killed because of the encouragement she gave the enemy. And no one knows how many American soldiers are being killed, along with civilian casualties, because of the encouragement our own politicians are giving the enemy. They don’t understand, or don’t care, that in their zeal to bring down our Commander in Chief they are killing our young men. I hope you will consider this point of view from the father of a Marine who was there with another son who may go next year.

Below are the words of Pastor Seiple’s son:

I did serve in Iraq in An Nasiryah south of Baghdad. I was in country from late March until late July of 2003.

You asked me to shed my thoughts and feelings about the war that’s going on over there. Unfortunately its not that simple. Let me try to explain. There’s nothing romantic about what you are going to here from me today. Its not in any movies or in any books. Its the reality that I live with. The same reality that everyone else that’s like me lives with.

First let me give you some background about how I grew up. I grew up in rural Warren County NJ. Mostly farmland and back roads. In the town that I lived in just about every boy’s father or grandfather had served in either WWII or Vietnam. We all grew up playing war in the woods with plastic rifles and homemade camouflage utilities. We fantasized about going on patrols in enemy infested jungles. We got into imaginary firefights and mock hand to hand battles with each other. We even died trying our best to make it look like how Hollywood glamorizes it.

Going to war was more of a future reality for us. For me it seemed my destiny. When graduated high school I enlisted in the USMC infantry. I joined the Marines because they are the best at combat. I wanted to be part of the best. I wanted to be the best. I knew I would someday most likely go.

Since then I have served in Kosovo and Iraq. While in those places I was able to experience just about everything I had imagined I would and many things more. Most of those things were more horrific than I ever could have imagined. Many of those things still visit me as I sleep at night.

When I returned home Iraq I felt empty and useless. I received my honorable discharge from the Marine Corps and attempted to live a normal life with a normal job. I was very depressed as were many of the comrades that I served with. I missed the sense of duty and excitement. I learned these feelings are normal when transitioning back to civilian life.

I never thought much about the war as an political issue until recently. Democrats are using the war as a political weapon in order to remove George Bush from office. Many Americans are starting to say that the war was a waste of American life and US tax dollars.

You asked me for an opinion. Here’s the best that I can do. Many men and women went to Iraq. Many died. Many more lived. I lived. I got the chance carry the orders given to me by my superiors and I have no regrets. Beyond that I really have no opinion. I got a chance to do what I trained to do. It was hot and miserable. It was terrifying and morbid. It was war. If not for anything else, we made the Iraqi way of life a lot better. Their way of life was one step above hell. The only thing Americans know about Sadaam and his regime is what the press allows them to know. It was a terrible life for the Iraqi’s. They were starved and terrified. That’s the only lifestyle they know. Sadaam was a dictator. He is a madman. I know this firsthand. He had to be removed. Given the capabilities Sadaam would have annihilated us and our allies. I view him no differently than Osama Bin Laden.

I’m glad that President Bush was proactive enough to make a tough decision in the face of certain criticism and possible career ending odds for the sake of our way of life. Freedom is a beautiful thing however; it takes blood to preserve it.

You can say whatever you want about the war. This is a free country and you have the right to express whatever opinion you want. Many men have died over the centuries so you can have that right.

Just keep one thing in mind. For those of you that feel the need to express your opinion about how wrong the Iraq war is and how we wasted so many human lives remember who’s standing within earshot. There are many men and women out there just like me, trying to mingle in with society that don’t view their hard work and devotion as a waste at all. We choose to look at the positive side of the story and focus on the good things that the war accomplished. We know that the comrades that we lost didn’t waste their lives. We all volunteered. We all did everything we could to get there. You will never understand this unless you are like me. If I was ever called upon again to go back, I would go in an instant.