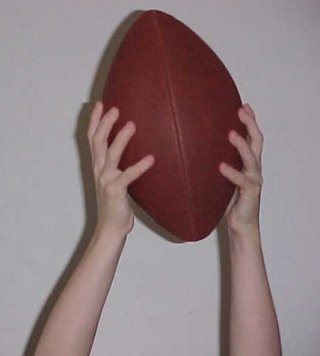 ALRIGHT! Super Bowl Sunday and my team is playing! They finally made it! After all these years, the boys from Boston are going to the Super Bowl!

“Wait… Did you say Boston? The Giants aren’t from Boston, neither are the Ravens.”

That’s right. I said the boys from BOSTON are going to the Super Bowl. That’s right! AEROSMITH is doin’ the half time show, baby! Heh heh! SCORE!

WELL, my only plan for the day is to do nothing but watch the game later. I’ve been battling off a cold since Wednesday. It’s just enough of a cold to make me feel rather lethargic, a little achy, and somewhat cranky. (I bet you’re glad you aren’t hanging out with me today!) I thought I was over it on Friday, but it’s got me feeling pretty crummy this weekend. And Thursday was the worst! My cold was at its peak and I had a migraine headache on top of it. I was scheduled to be off from work on Thursday morning in order to take J to the neurologist. We both felt so sick that I cancelled the appointment and stayed in bed moaning until 10:30 when I finally slithered my way to the shower.

I did manage to get to work for the second half of Thursday and even had lunch at a Chinese place with a friend. I ordered plain old chicken and broccoli figuring that it should be the Asian cold remedy just like chicken noodle soup is American. Besides, I couldn’t taste much so there was no sense ordering anything fancy. My friend ordered some spicy shrimp with garlic sauce. Thank God for my cold! I wouldn’t want to smell that breath in the car all the way back to work!

I guess I must have been a little silly at lunchtime. My friend told me the next day that I was like a 10 year old boy who was up to some kind of mischief. (So what else is new?) But let me explain. In the middle of lunch I took my second dose of migraine medicine. It only took about 10 minutes for it to kick in and then… Well, my memory is a little foggy after that point. I don’t think I caused a scene in the restaurant. We had a team meeting as soon as we got back from lunch. I don’t think I caused any commotion during the meeting either. And I’m pretty sure I remained fully clothed the whole time.

LET ME tell you about those migraine pills though. Those things are deadly! Not just because they can whack your brain for a bit. They are just plain hard to swallow! Big, chalky and nasty, they just refuse to go down my throat!

A few months back, I had a migraine while I was at work. On this particular day, a good portion of the people in our department were attending a business seminar. So it was pretty deserted and quiet in our area. When I tried to swallow my pill I coughed and the pill launched up the back of my nose, ricocheted off the inside of my skull and shot like a meteor right down into my windpipe! I tried coughing again to no avail. I tried swallowing more water and just made matters worse. I was barely able to get any air and was making some pretty scary noises. My head started getting dizzy. I thought that pretty soon my life was going to be passing before my eyes. And I saw the tunnel of light that everyone speaks of. (Okay! It was only the fluorescent light above my cube. I just added that for dramatic effect.) I knew I had to get help quickly. I stood up and was about to go to the person on the other side of my cube wall. Standing there for a moment I decided to make one last desperate attempt to save myself. So I wrapped my arms around my ribs, squeezed with all of my might and coughed again. With an uncontrollable holler, that pill came flying out of my mouth like a bullet! It ping-ponged all around my cube! My eyes were watering. My face was beet red.

I had survived! I thought, “How ironic that something that is supposed to make me better nearly killed me!” Many times when I have had a migraine I said I would rather die than endure such pain. But I never really meant it!

YES, I am surviving right now. This past week was rather tiring. I won’t go into details about making arrangements for S to transfer schools, or the horrendous argument the kids had before I got home from work, or how I put off doing laundry a few days too many. (Did you realize that after a while, if certain types of undergarments are not changed they almost need to be chiseled off of one’s body?? Oops! Forgive me for putting that thought in your mind! Heh heh!) So life goes on. The stresses and trials continue. The house is still a mess and the dishes are piled sky high. But I am still breathing. Somehow I’ve managed to make it this far. So I’m not going to quit now. I only have a few gray hairs. I’m not completely bald yet. And I haven’t reached the stage of insanity where you start to drool on yourself. So I still have some fight left in me! Bring on those three teenagers and all their dirty laundry! I’m game!

WELL, since I live in New Jersey I guess I better root for the Giants tonight. They really should be the New JERSEY Giants, you know! Their stadium is in New Jersey. But whatever. I’ll be kicking back, sipping on my Robitussin, watching the big game tonight. Regardless of who wins, I’ll be happy. My boys made it to the Super Bowl. AEROSMITH RULES!

Published On: May 28, 2008
(Originally posted on the website Heron Flight) Make a wish. Make three!

Published On: May 28, 2004
(Originally posted on the website Continuum...) My neighbor has beautiful flowers. He has a huge house, nice cars, swings and sliding boards for his children. His lawn is perfect. His hedges are trimmed. But it seems that he spends most of his time on the upkeep of the place. He's always sweating, and mowing, and trimming, and raking. His wife Continue Reading →