My gal and I ran the Westfield 5 Mile Turkey Trot on Saturday. It was cold, but we had a blast! And our running times were pretty good!

Here are a few pics!

The Skim Milk Negates the Calories

It’s a fact. Scientifically proven. The skim milk negates the calories of the donut. Trust me.

(This might explain why I’ve run over 50 miles the past few weeks and only lost 1 pound.)

Yesterday, I ran a 5K in my hometown of Washington, NJ. It was the second annual “Boro 5K,” something of which I am proud, seeing as my hometown is considered a “backward” town by many. For many years, there hasn’t been much going for the town. There aren’t many good jobs. To a large extent it’s a bedroom community to many who crawl along in traffic each morning for several miles on Route 31 and then sit in more traffic for several more miles on I-78, who then slog their way through traffic again in the opposite direction back to their bedrooms each morning. They don’t spend much of their money in Washington either. Other than a few grocery stores, most other shopping is done 10 miles in various directions away from Washington in Clinton, Hackettstown, and Phillipsburg. But I consider it my hometown and I was happy to run there on a perfect October day.

My ten year-old grandson ran with me. It was his first race. He was wanting to run one for a few years since I’ve been doing them. Since he’s been using his recess time to see how many laps he can do these days – as opposed to swinging the swings to see how high he can get, or throwing a football with other boys and risking the lives of the frail children nearby, or purely heckling girls as I was known to do at that age, I figured it was time to let him take a crack at a race and see how he likes it.

He did an awesome job! I pushed him a little at points to keep him going, used psychological tricks to distract his mind from what his legs were feeling (“Hey, doesn’t that cloud look like an eagle? Makes you feel like your flying, doesn’t it?”), and kept promising that we were almost to the water station.

When we got near the end of the course, I said, “When we go around this corner, we only have a few blocks to go. So let’s pour it on and give it all we got!” Going down that stretch we got faster and faster. A block and a half away from the finish line I taunted, “Think you can beat me?” My running mate the proved to all the world (meaning my little hometown upon which the entire world was focused at that second) that 10 is way faster than 50! I still came in under 28 minutes. That’s acceptable at this point. But next time… That kid is going down! 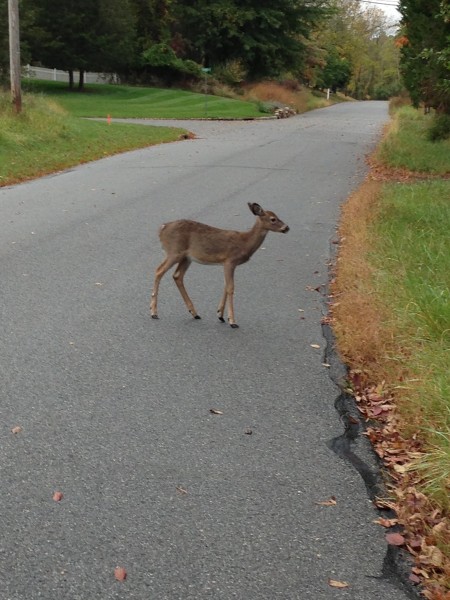 Saw this little guy while out for a run.

One of the wonders of modern technology is an item we refer to as a “cell phone.” What a misnomer! This gadget is slim and light enough for me to carry while I run. Not only does it give me the ability to make a phone call while out running, if need be, it also has the ability to track the course of my run, record my pace, show me my distance, and calculate the calories I burned. I can communicate via text message when I’m feeling lonely out there. I can post to Facebook. And I can even read a book on my Kindle app if I get bored while trudging through mile four! (Yes, I have done it. I have found motivation in the pages of “Eat and Run” by Scott Jurek while running.)

One of the features I love the most about my phone is its high quality digital camera. Its 8 megapixels produce photos that blow away the photos from the 1.4 megapixel Sony Mavica which I paid $500 for a dozen years ago! That camera used floppy disks and could hold about 20 pictures on each disk. It’s hard to run with a pocket full of floppies and a 50 pound camera hanging from one’s neck!

All that being said, here are some photos from the last few days.