This creepy bloody skull face was inside the tunnel from the previous post.

I sent the photo to Weird NJ Magazine. They published it in issue #35 in October 2010. 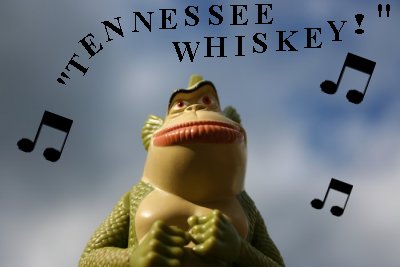 Along about the second weekend in May, Jenkins Malone, monster, rambled on over to Califonburg in his 1973 Dodge Dart. It wasn’t much of a car, but it had character, with its fine edging of cancerous fender rust along the rear wheel wells, its sun-faded rear dash, and its drooping headliner that sat like a veil atop Jenkins’ foam-front trucker’s cap. Jenkins didn’t care, as monsters usually don’t. He was happy to be swinging into town to catch his buddy JB’s band romping through tunes at the Bluegrass Festival. It was a down home event, where a down home kind of guy like Jenkins feels downright down home, just the way he likes it.

Jenkins strode in with just a touch of monster strut in his step, lifted by cheerful bluegrass sounds, the crisp mandolin notes bouncing along the top of the music, dancing merrily and helping Jenkins to forget the demands of the day, at least temporarily.

There’s JB, Jenkins smiled to himself, Boy can he make that mandolin hop! Sure is one heck of a happy sound!

Jenkins took a seat a few rows from the stage. He nodded hello to JB who gave a nod of acknowledgement back. That’s the way it is with buddies, no grand show of emotion, no elaborateness. A nod says enough.

Jenkins allowed himself to settle into the scene. There was a guy with a cobra tattoo on his calf selling ice cream from a truck to the side of the stage. He had a tendency to ring the bell on the truck after every song he liked. Which was every song, Jenkins noticed with annoyance. There was a chubby kid selling large pretzels off to the other side. A guy with stubbly gray whiskers in dark denim overalls and an old dingy t-shirt sat with his overweight wife, who sat with her breasts in her lap like two forgotten babies swaddled within her blouse. A youngster of about six, chubby like the pretzel kid, was doing an odd head banging belly dance in a moo-moo and flip-flops in front of the stage.

Americana at its finest, mused Jenkins.

After several enjoyable tunes, including a Johnny Cash cover that would do the Man in Black honor, in Jenkins’ opinion, JB’s band wrapped it up. With a wipe of his brow on his forearm, JB pulled up a chair next to Jenkins.

“Not much,” Jenkins replied. “That was some playin’ today, bro. You never fail to get my toes tappin’ and my heart wishin’ I was still playin’”

“Hey, you still got it big guy,” encouraged JB, “You’ll be playing again. Just give it time.”

“Hey, JB, you see that little girl dancing up there?”

“Does she look like she’s got Downs or somethin’ to you?”

“Hey, J, you wanna come over for dinner tonight? Me and the misses are having a couple of the guys in the band over tonight. We’re gonna get Thai food from this place by me. They got this great fake duck tofu dish, man. You wanna join us?”

“Yo, JB, what’s up with that girl you guys got singing in the band?”

“She does have nice shoes, bro.”

“Yeah, man. My girl would dig them shoes. Look at ‘em. They look all paisley or somethin’.”

The next band shambled onto the stage. The steel guitar began to cry and the singer crooned, “Tennessee Whiskey…” He was a man of Jenkins’ build with what appeared to be a medium-sized forest animal for a beard and a nest of hair in which such an animal might happily hunker down. He was shifty-eyed, wouldn’t look anyone straight in the eye while he was onstage.

Ah, thought Jenkins, wouldn’t I love to have a pint of that smooth black label Tennessee whiskey right now!

Just then HE came along. Daryl. He turned a chair around and sat facing Jenkins and JB with a big cheesy grin.

“Thanks, man. That’s very kind of you,” replied JB.

“No, man I was trippin’ while you were up there.”

“Oh! Sorry, man! I’m Daryl. But the guys I hang with called me Crazy D. You can call me Crazy D if you want to. Hey, can I get your phone number?”

Geez! Who is this kid? Jenkins thought to himself. What a clown!

“Aww, Daryl, uh, Crazy D, man, my cell phone’s busted, you know? It went through the wash and then melted in the dryer and then, uh, big Jenkins here stepped on it by accident.”

“Damn. That’s too bad. Hey, you outta get one of them pre-paid phones, man. There only like 20 bucks at Wal-Mart, you know?”

Oh God, I definitely need some whiskey now, Jenkins continued thinking. Look at this kid with the sleeves cut off of his Bullet for My Valentine t-shirt and his work jacket tied around his waist.

No. Your brother, Jenkins’ mind spazzed.

“I’m seventeen. Hey, guys, check this out. Check this out. I was at this huge rock concert festival thing last weekend. There were like, I don’t know, fifty bands there! I’m not kidding. It was freakin’ awesome! The mosh pit was sooo cool! I had a blast moshin’, you know?”

“Nice, Crazy D. It kinda looks like Kentucky,” said Jenkins with a grin.

“Guys, we should start a mosh pit right now. We should just like go right up there in front of the stage and just, you know, freakin’ start slammin’ into each other and stuff.”

“Yeah, then we can start spooning and making out and crap,” said Jenkins with one of his typical absurdist comments meant to catch the intelligently challenged off guard.

“No, really. Moshin’ is so much fun. Look at the scratches all over my back from last weekend,” continued Daryl, lifting his shirt. “You should have seen this one girl. She got punched right in the FACE and she DIED, man. She DIED.”

“And that’s your idea of fun?” asked JB in disbelief.

“That’s because he didn’t get punched in the face and die, JB.”

“Here’s another thing, kid,” said Jenkins straightly. “Nobody uses the ‘M’ word who ain’t a monster. You dig? Only me and my monster bros can use the ‘M’ word with each other. Then it’s cool. But people like you, you need to refer to us as Monster-Americans. Ok?”

“Uh, yeah, man. I’m sorry. Hey guys, I’ll be back. That’s my girlfriend over there. I think she’s mad at me.” Daryl got up to leave just as suddenly as he first appeared.

“You mean the one with that little bit of beard on her chin and the army boots?” laughed Jenkins.

“Ha!” laughed Jenkins. “Good times! Good times! Hey, my friend, I’m headin’ out. I gotta split before ‘Crazy D’ comes back over here. But maybe you’ll get a little action with him later. He seems to really have a thing for you, man! At least maybe a little spoonin’ behind the stage! Ha!”

The Dodge Dart motored over the mountains toward home, Jenkins humming “Tennessee Whiskey” with the windows down.

“I gotta get a pair of them shoes for my girl. She’d like those.”

Slaughter at the Mouse Hotel 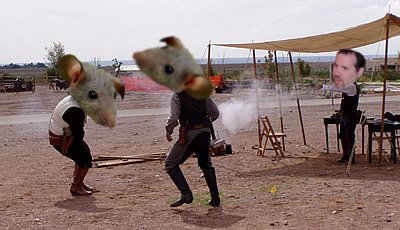 Last night, I fell asleep finally at 1 AM. I hadn’t had much sleep all week and I was happy to have finally hit the sack.

But then… maybe an hour or two later, I woke up to this scratching sound in my room. I was so tired that I just reached over and banged on the floor to make it go away. But it wouldn’t. I put music on so I couldn’t hear it and fell asleep again. I knew it was a damn mouse.

Then at 4 it woke me again. This time much closer to my bed. Then I realized the dirty thing was on my dresser!!! But I couldn’t see it among the vitamin bottles, the Wal-Mart receipts, and the rest of the flotsam and jetsam of the frantic ocean known as my life. So, I wearily reached over and tried slamming a drawer, the one where I stash my winter gloves and hats, to make the beast flee.

The clawing and nibbling hesitated… then continued.

Finally I realized that it must be under the small bookshelf, crafted by jigsaw and screwdriver 20 years ago, sitting on top of my dresser. A bit of space beneath provided a perfect mouse hideout.

Slightly more awake then, I remembered that there were three mouse traps in a package stashed in a kitchen cabinet, the ones I bought for the Mouse Mobile when January deep froze the world and the mice took refuge in my car’s heating system. Four of the infiltrators died then.

Unbelievably, in route to the kitchen, I heard scratching, then scurrying! More pests afoot!

“I DECLARE WAR ON THEE, RODENTS! YE SHALL NOT LIVE TO SEE DAWN’S ARRIVAL!”

I deftly deployed two traps at either end of the kitchen counter and strategically stationed the third atop the dresser, abutting the rear of the bookshelf. Taking cover in bed, I waited.

Less than two minutes later I heard “WHACK!” out in the kitchen.

“Keep the change, ya filthy animal!”

And another bit the dust while I slept the sleep of the victorious. 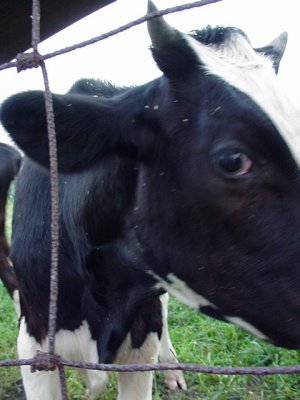 Yesterday on a sunny afternoon…

Driving down a country road…

“Hey, Tim, did you see that? It looked like a purse in the middle of the road.”

“Yeah, it is a purse. Cool! Maybe I don’t need to go to the ATM for cash after all!”

Stepping out of the car…

“Watch it be full of shit! There are probably kids hiding in the corn over there watching.”

Squeezing the bottom of the purse…

“OH MAN! THERE IS SHIT IN IT! SOMEBODY GOT ME GOOD!”

Driving away laughing and wondering…

“Somebody is probably watching from one of those houses and laughing right now!”

In the rearview mirror… a kid runs out from the corn and moves the purse back to the middle of the lane.

Jamming on the breaks…

“I’m going back! That little fucker got me!”

One moment later… jumping from the car…

“OK, YOU PECKERHEADS!! WHERE ARE YA! I KNOW YOU’RE IN THERE… AH HA! I SEE YOU! YOU GOT ME, MAN! YOU GOT ME! I’M USUALLY THE GUY PLAYING TRICKS ON OTHER PEOPLE! BUT YOU GOT ME THIS TIME!”

A kid comes out of the corn… his face beaming…

“I peeked inside. Now I can’t wait to get home and wash my hands!”

Tim is out of the car now…

“Ha! That’s great! I can tell you guys have seen The Mighty Ducks!”

“Yeah! Yesterday, we filled an old suitcase full of cow shit and left it by the road. Some guy stopped and threw it in the back of his truck without looking in it and left! Ha! Bet he was surprised when he got home!”

“Man, this is hilarious! I feel like hiding in the corn with you guys and watching all the other dumb people stop!”

A second kid emerges from the corn…

“Dude, just so you know… you REALLY made our day!”

From the corn comes a camera crew and Aston Kutcher…