WHEN WE WERE ROCK STARS

“YOU wanted the best and you got it! The hottest band in the land…”

NOW, if you are any kind of true rock-n-roller, you would know that “APE” is not the real conclusion to the above lines. You would know that those lines are at the beginning of KISS “Alive I.” Back in the early to mid seventies, KISS came on the scene and took the teenage world by storm. They were different. They were awesome with their make up, costumes, platform shoes and catchy rock-n-roll tunes. You either enlisted in the KISS Army or you just were not with it, man!

So, Cousin P and I decided that we would start our own rock band. Somehow we came up with the name APE. We each had stage names as well. He was the infamous “Alfred B. Oil” and I was the ultra-cool “Barney B. Bogart.” Hey, it sounded cool at the time! But what did we really know? We were still making the transition from plaid double-knit pants to tie-dyed bell-bottoms. We weren’t fully hip yet.

Cousin P had a small low quality drum set that Gram and Pop got for him from Sears or something. So he let me play that. His mom then got him an electric bass guitar from J C Penny, I think. So we would set up in Gram’s basement, put some colored lights on and make some noise. We would yell and scream and carry on. We even wore our blue motorcycle helmets while we played. That was the ultimate in coolness! If KISS could go on stage with their faces painted, we could certainly start a motorcycle helmet trend! 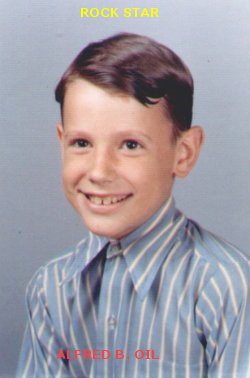 SPEAKING of KISS’ costumes, there is something I could never really understand. Paul Stanley is the lead singer, rhythm guitarist. His costume, with a big black star over his eye, represented a rock star. Okay, that is cool. Ace Frehley, while sporting such a happening name like Ace and playing lead guitar, represented some kind of alien. Cool again. Gene Simmons was the bass guitarist and portrayed some kind of demon lord/monster, breathing fire and spitting blood while dangling his surgically enhanced tongue all over the place. You can’t get much cooler than that! But what was Peter Criss’ deal? He was the drummer and his costume was a… cat?? Huh? (I recently heard an interview with Gene Simmons. He said that they decided to unmask themselves when the original band broke up and they had to find guys to replace Peter and Ace. He said they were afraid the next guy might want to dress up like a giraffe or something and they would have a real zoo on their hands!)

MY MY very first album was Alice Cooper’s “School’s Out.” I turned Cousin P on to Alice. We both were hooked! It wasn’t long before we added to Led Zeppelin, Aerosmith, the Stones, AC/DC, Pink Floyd, Foghat, KISS and a host of other rock giants to our record collections. Also, it was not long before we began imitating some of these people in a lot of ways. Cousin P was not allowed to, but I began letting my hair grow long. Our wardrobes suddenly had all kinds of T-shirts sporting the arrogant faces of our leaders. Circus magazine became our staple diet. My bedroom wall was covered with posters from Circus and from the Alice Cooper fan club. And we, along with many of our peers, would often pose for pictures with our tongues as long and pointed as we could get them just like Gene Simmons. Once I brought in a bloody baby copperhead snake that the cat brought home. I pulled an Alice Cooper as I let it dangle out of my mouth as I turned to the girl next to me in eighth grade homeroom. What a delight it was to see her flee the room in an ear-piercing scream! Cousin P even attempted blowing fire like Gene Simmons. A few good burns on the lips ended that though. (I sometimes think that the two of us would have ended up HERE for real if we kept following our heroes!) 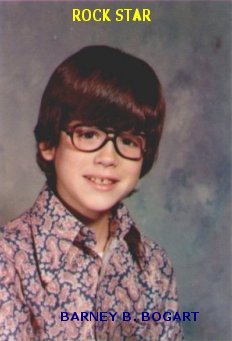 SOME of the things we did in imitating our idols as kids were rather mindless and even a little scary, looking back at it now. What were we thinking? What do we do about our own children and the people that they are following these days? At times I have found myself acting the role of “parental censorship officer.” And rightly so! But more often than not, since I do like a lot of the music that my kids like (other than the rap), I have found that some of the issues raised by my children’s idols and their songs have given us an opportunity to talk. It has given me an opportunity to teach them some good values when I hear negative attitudes advocated in their music. It has given me an opportunity to talk to them about suicide, sex, anger, drugs, proper attire and the complete evil of boy bands (I couldn’t resist!). We have a good time listening to music. We sing. We shout. We play air-guitar. We dance, even in the car! Just recently, as we approached our street on our way home one night, AC/DC’s “Shook Me All Night Long” came on the radio. The kids begged me to not turn the car off until the song was over. So, I cranked it up to full volume and all five kids and I drove around the streets near our home until the song was over. What a blast! And yes, later the older kids and I talked about the fact that that song is just a sex song. Rather than taking my role as “parental censorship officer” to the extreme and banning all rock-n-roll from our house, I have chosen to use it as a touch point to relate to my kids. When we were kids, rock was all fun and excitement. As an adult, it still is. But there is something more to it now. I know that I have to be an example to my children. I refuse to leave their mental and emotional molding in the hands of their idols. I am the rock star in this house! Now put the disk in, crank up the volume and dance with me kids!