So Goes the World 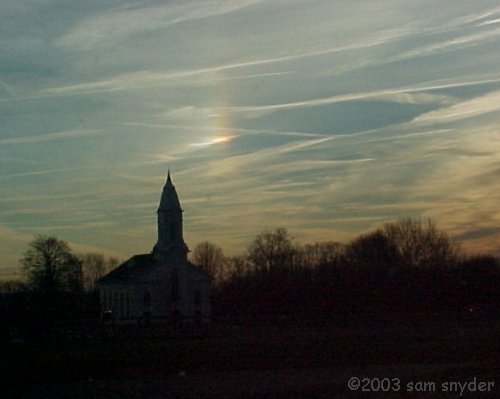 It is said that when you see a ring around the moon at night, it is going to snow the next day. What if you see a rainbow around the sun? Does it mean the same thing? Because it is supposed to snow big time here today and tomorrow, possibly 10 to 14 inches in our area by the end of the day tomorrow.

I am not well “treaded” for this storm. The tires on my car are wearing pretty thin. I have no boots since I destroyed them on THIS ADVENTURE back in August. But all I have to do is make it home from work and I will be fine. It can snow all weekend then.

The photo above was taken while driving to work yesterday morning. I set the camera exposure extra low to make more of a contrast between the rainbow and the tree line, as well as to minimize the glare from the sun. The church in the picture is located in Fairmont, which is near Califon and Oldwick.

* * * * *
I was going to run again yesterday, even though I was debating if that would be a good thing right at the beginning of getting started again, especially given the fact that I’ve been averaging about four hours sleep per night lately. It’s at times like these, when I push myself a little too much, that I fear the Brain-Sucking-Monster-Migraine will get me. Still, I wanted to run.

However, even though the girl who sits next to me at work remembered to bring her running gear, even though we talked all morning about running at lunchtime, even though it was warmer than the day before, we didn’t go running. This time she changed her mind at the last minute when someone asked her to go out for Thai food for lunch. She didn’t stop there though! She, along with the Thai lunch instigator, stood at my cube and harangued (cool word, huh?) me about being too hard on myself for wanting to run again. What? I only ran once after loafing for how many months? How hard on myself was that? (Pretty damn hard, actually!) Well, they convinced me to go to lunch. Honestly, they didn’t have to harangue too long and I rationalized it all away and soon found myself behind an abundant plateful of mildly hot Thai food.

I am beginning to wonder about the girl who sits next to me at work though. Not only has she not gone running with me, now she has even resorted to haranguement (cool, but is it really a word?) to persuade ME to NOT run!

I will run today though, come hell or high water! Or snow.

* * * * *
Man, did I crash last night! I think I actually managed to get about seven hours of sleep for a change. I was extremely proud of myself for resisting the temptation to turn the computer on and going to bed instead.

On the way to work this morning, the driver in front of me stopped suddenly. I jammed on my breaks so hard that I gave myself a wedgie! I suppose it is better to give yourself a wedgie than to BE a wedgie by slamming into somebody else’s rear end.