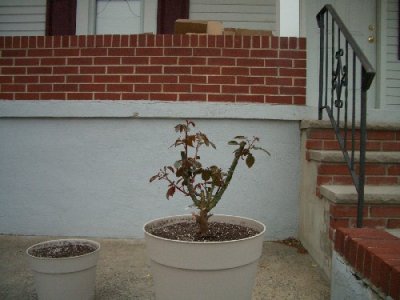 I’ve started a new daily photo project. This one is called “The Red Rose of Jersey.”

We recently moved, hence the reason for not having time to write much of anything for a while, and now have a nice front porch and sidewalk area that we do not have to share with obnoxious neighbors as the case was formerly. So we started a “bucket garden” with tomatoes, peppers, cilantro, sunflowers, marigolds, zinnias, bells of Ireland, love-lies-bleeding (Oooooooo!), and more.

I picked out a rose plant, American Beauty variety. As it is not much more than several stalks sticking out of the soil and a few bunches of leaves, it should show many changes as it grows. A perfect photographic subject!

This time I am using Arissa’s camera at a large pixel setting mounted to a tripod. This will give the photos a more consistent look and quality. I will post a small version of each photo on the site along with a link to the larger version for anyone who wants to see more detail.

My last daily photo project, A YEAR IN ONE PLACE, lasted for, uh, well… a year. I’m not sure how long this photo project will last. Maybe just for the season until the last leaf falls from the plant in autumn? Maybe through the winter and into the summer of next year? Until there is no longer enough server space on the internet to hold all the pictures? We’ll see…

So… with that little introduction, here begins the Red Rose of Jersey project.