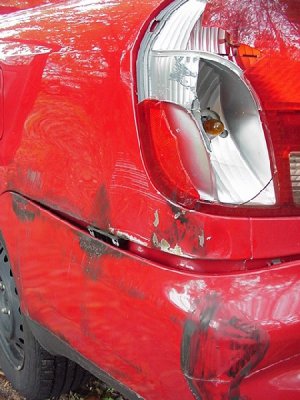 Can you believe it? Someone crashed into my car again! This time it was intentional and the culprit fled the scene… in a dump truck!

Last Friday, I picked up Arissa from work at 6 PM. We were traveling down a four lane road with traffic lights scattered along the way. Suddenly, a dump truck went barreling around us on the right. He was weaving in and out of traffic at a ridiculous speed. He almost caused one car to crash and had to jam on his breaks to avoid running into the back of another. It was crazy! I said to Arissa, “Now that’s the kind of guy that I wish would hit someone’s car, not enough to hurt anyone, just enough to get himself in trouble.”

At one of the lights we had to make a left. There are two lanes that make that left turn at that spot. The light was red. The truck was in the left lane. We were in the right, slightly ahead of him. When the light turned green I stayed close to the line between the lanes. Just a hundred yards after making the turn, the driver in the truck must have decided it was time to force me out of his way. I heard his engine rev, saw his headlights come up fast in my side mirror. He intentionally swerved the truck into the back corner of my car. Crash! He pushed us right out of his way and rocketed down the road. Meanwhile, another car in front of him tried to get out of his way, hit the curb and almost lost control in the middle of all the traffic.

We were shocked! I stomped on the gas to catch up to the truck. We got his license plate number. Then we pulled up along side of him to see the company name on the side of his truck. By this time we had reached another light. He glared down at me with an insane look on his face as if he’d run us completely over if he got the chance. I gave him a cocky smile and nodded. I had a plan.

At the next light was the local police station. By the time we reached that light, traffic was clogged. We pulled in to the station and ran to the door. The truck was stuck in traffic as we entered. The man who hit the curb followed us in. We told the police what happened and they radioed their patrolmen.

Sad to say, the police did not find the truck! How can you not find a large dump truck, a red one no less, that is stuck in after work traffic?? All we could think was that the driver made a mad flight through the side streets and eluded the police.

At this point, I am waiting to hear if the police locate this maniac. There was some confusion because the license plate was registered in a different town than the address on the side of the truck. I was told to give the investigators several days. Hopefully, they will find the jerk and he will have to pay to get my car fixed. However, the police said there is no guarantee. At least the car is drivable and maybe I’ll get another check from the insurance company. Just in time for Christmas!