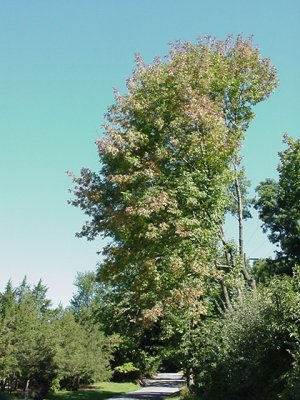 TIME GOES BY SO QUICKLY. While I am still in summer mode, the air has begun to chill and some of the trees are changing color (note the photo on this page). Everything is still predominantly green. But there are touches of color here and there, kind of like the tufts of white hair that are noticeable in my beard as I’ve been growing it out lately. It’s not enough of a change to say, “That’s it. The season is over. It’s time for the gloom of winter.” It’s just enough to serve as a reminder that things don’t last forever.

Even though autumn is my favorite time of the year, it seems that I am becoming increasingly resistant to its onset, not willing to give up the hot, hazy, weekend afternoons, not eager to miss my daughters when they leave after summer break, not so readily comfortable with the inevitable changes which the passing of time brings. I want to stay in the sunshine a while longer. Keep the sun up until nine each night. And for heaven’s sake, let’s not change our clocks and rob ourselves of evening light this year!

I think my resistance to fall is indicative of my long existing dislike of change. Sameness is easy. Familiar is comfortable. Why go mucking about with life and making it difficult for yourself? Adjusting. Coping. Reorienting. Forgot all that! Status quo. Same old same old. Nice. Then again, with that mindset I never would have discovered how fantastic sushi is, or how gratifying spicy Thai food is, or how semi-tolerable pickles have become after hating them for 44 years. Yes, I’ve started to like them. Odd.

More significant than a dislike of change is my increasing anxiety aging, accompanied by a more noticeable denial of aging. Notice, I did not say “getting old”. There is no “old” in relation to myself in my mind. It’s just not right. It doesn’t fit. It’s a label and a condition that I refuse to take on. I am beyond the old Oil of Olay commercial slogan of “Grow old gracefully? I intend to fight it every step of the way!” I intend to ignore it and it will go away.

Guess what… my beard is turning gray. So are an increased number of hairs on my head. That’s not such a big deal. Unless you continually have a decreasing number of hairs on your head like I do! The fleeing hairs are causing the proportion of gray ones to advance too quickly. IT’S NOT FAIR!

Fairness and aging philosophies aside, the leaves are beginning to change and time is flying. It seems like it was just yesterday that my daughters were here on summer break. But it’s already been a month and a half since they left – the same as the total amount of time they spent here. They have already finished a full month of school. I am already making plans to go to Georgia to see them for Halloween, dressed as Big Bird, I might add. (No, not the whole way there, silly!)

I suspect that the days ahead, at least between now and the middle of December, are going to speed on by at an unyielding speed. The reason? I am back to school myself. I am back with a vengeance too! I am taking four classes. That is enough credits to be considered a full-time student. That is enough of a workload to be considered a full-time IDIOT! “I want to be SMART!” “Well, Mr. Snyder, that was a pretty DUMB thing to commit yourself to sitting in classrooms for 9 hours per week for 16 weeks AND an additional online course.” Hey! Ya know what? All the cool kids are doing it and I gave into the peer pressure. My daughter is enrolled full-time in online classes from the University of Phoenix. My son is enrolled full-time at the same school I’m at. And my brother is enrolled ULTRA-full-time in 6 classes! What? I’m supposed to do nothing but work full-time, be a dad, write, play music (now and then), read lots of books, do housework… and NOT go to school too? No, I want to be cool like the rest of them.

There are other factors making time zip by. And other reasons why I feel I’m getting old. Oops. I meant reasons why I’m suspicious that I MIGHT be “aging”, like an achingly painful shoulder problem that has been plaguing me for the entire month of September, and persistent asthma problems, and weight gain, etc. But we have plenty of time for me to write about those thrilling topics at a later date… like after I catch my breath (or not with asthma) after final exams in December. However, I’ll try to step out of the whirlwind now and then to write before time carries us that far.

Until we meet again… Be cool. Be at peace. Take time to smell the roses. Stay forever young.