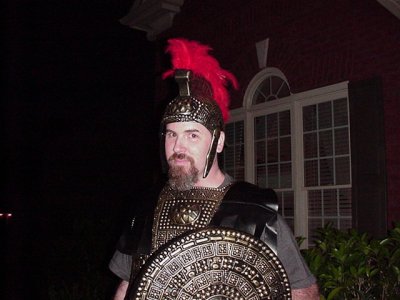 So, here I am pictured in my stunt double outfit for the movie “300”. Let me tell you. Those helmets make your head sweat!

Okay. You’re smart enough to realize it’s a plastic helmet and I’m not much of a stuntman. But I am one heck of a trick or treater! (“treatOR” in Old Latin) Those Greeks in “300” may have marched through mountain passes and challenged the monstrous Persian army, but I, Samuelus Caesar, flew all the way to Georgia to confront my enemies. Well, sort of. My ex-wife was there. But I intimidated her with my red plumage and she left me alone. Thank Zeus! No tricks. Just treats. The treats of seeing my daughters and “Roming” around the neighborhood pillaging and plundering in a confectionary sort of way.

Over the past few years, my employment arrangements have become flexible enough to permit me to work while visiting my daughters. I was here last year and dressed up as a prisoner. The funniest part of that was when a little girl didn’t realize what I was and with wide eyes said, “Hello zebra!” as she and her father passed by me. Children are delightful and the things that come out of their mouths sometimes is happily revealing of their enviable simplicity. My youngest daughter, who is almost 12 now (what??), said that this year I was her “dad in plastic armor”! Where did she get that sense of humor? Hmm…

For trick or treating, I took command of a troop of four boys, three girls, and two other dads. One of the dads dressed up. The other didn’t. I court marshaled him for being out of uniform while on patrol in enemy territory. A few of the boys were dressed as football players. Two girls looked like gypsies or something. My daughter was a cat. (My other daughter was a rock star, but too cool to hang with us. She went with her 13-year-old friends in a different housing development.)

The people in Georgia, or at least in this part of Georgia, participate in Halloween more than the folks back in New Jersey do. I don’t know if that is due to “Southern hospitality” or the warmer weather here or that I’ve just lived in the wrong parts of New Jersey. Down here there were people out having a grand time! Granted, we’ve already had frost back home and down here the people panic at the first chill breeze… while I’m sweating in short sleeves (and plastic armor)! Case in point: I am writing this while sitting in a coffee shop late in the afternoon. It’s over 70 degrees outside. They have a fireplace burning in here! I kid you not, soldier’s honor, cross my breastplate and hope to die, stick a javelin in my eye. Now I know why the Confederate Army lost the Civil War. They were cold!

The kids had a great time going door to door for candy. It was hard to keep up with them at times! With so many kids and parents out and about, it was hard to keep an eye on all the kids in our group. At times, one or two got lost in the melee and I nearly dispatched the other fathers on search missions. But I was able to keep the troops together and on course. However, after an hour, grumblings within the ranks began: “My feet hurt.” “My legs ache.” “I’m tired.” “I don’t want to walk anymore.” The terrain was quite hilly. But, in the tradition of Alexander the Great, Samuel the Awesome roused their loyalty and ambition, leading them home with their spoils in bulging pillow cases. Victory was sweet!

Now, as various and sundry pressing duties require my attention, I must sign-off.

I command thee to Google it if thou doth not understand.