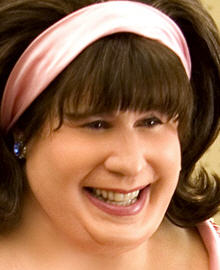 I took my younger daughters (11 and 13 now) to see the movie HAIRSPRAY last night.

There is something comically disturbing about John Travolta disguised as an obese, reclusive mother of an obese and overtly charming teenage daughter. While listening to all her (his?) motherly advice, there was constantly the thought in my mind, “That is Travolta! That is Danny Zuko! That is Vinnie Barbarino, for crying out loud!” Since when is he a mom??

And married to Christopher Walken?? Thank God they didn’t kiss in their dance scene! Big Travolta in drag making out with nearly sickly-thin Walken would have been too much for my brain! After all, Walken is “Bruce Dickenson”, the “More Cowbell” guy. You know, “I got a fever, and the only prescription is MORE COWBELL!” What, is he now yelling, “MORE TRAVOLTA! MORE TRAVOLTA!”??? Ewwww.

You don’t get that reference? Watch this:

Now, apart from Travolta heeby jeebies, we all thought the movie was GREAT! In all fairness, Travolta was great too. The fact that you knew it was Travolta underneath added to the comedy. Much of the singing and dancing was very good, and I’m not real big on musicals. The parodies of 60’s styles and mindsets were good too. As compared to the original Hairspray movie, there was relievingly less making out, only a few kisses. I was concerned on the way to the movie when my 13 year old said, “I hope there won’t be as much making out in this one. They were all giving each other hickies in the first one!”

Why does my little girl know what a hickie is???

Of course, one of the main themes in Hairspray is the issue of racism, akin to the issue of society’s rejection… or possibly worse… it’s ignoring of obese people. Human beings have a shamefully immense practice of valuing other people purely on their appearance! What does the color of your skin have to do with who you REALLY are? The color of your skin may influence who you become through your life because of society’s treatment, better, mistreatmnet of you. But the fact that you are white, black, yellow, red, or, my personal favorite, magenta, has nothing to do with the intrinsic value of your character. And there is a lot of labeling based on skin color that goes on in this country. When you talk about someone of a different color than yours, do you simply refer to them as “Jane” or “Harry” or the “doctor” or what they are? Or do you tag on “the black girl,” “the Puerto Rican guy”? Why do we distinguish people based on something they have no control over rather than on their basic character?

And isn’t this the point of Dr. Martin Luther King, Jr.’s dream?

My philosophy on racism is one of “transparency”. Colors do not matter. You are not black. And I am not white. Value me according to my inner character. I’ll do the same for you.

Go see Hairspray. I think it’s worth it.