Once Upon a Smoke Break 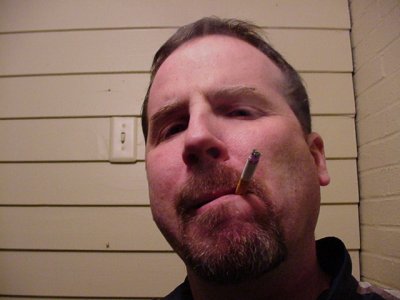 It’s been almost 8 years since I first began writing online. Eight years. Eight. Huh. How about that? I’ve been missing it lately. I need to do it more frequently again. Lord knows I still have plenty of stories to tell.

Occasionally I enjoy a good cigarette, a dirty little tendency I’ve picked up over the past several months. There’s nothing like a little nicotine buzz when you’re stressing over so many things that sooner or later you realize aren’t worth your time, energy or health stressing over. Ignoring the health issue for the moment, there is something satisfying in flicking your finger at life, flicking your Bic for a light, and taking a moment for yourself.

I have noticed that my desire to indulge the tendency increases in direct proportion to the level of stress and bullshit I have to cope with on any given day. However, the Big Corporation I work for does not allow any smoking on their premises. You can’t smoke in your own car on company premises. You either have to walk out to the road and make sure you stand off their grass or take a drive to smoke.

Being that I do not like the smell of smoke on my clothes or in my car, the driving option doesn’t work well for me, unless I stop somewhere and get out.

And here’s where the story gets freaky.

One afternoon, bright and sunny, I went out. A quarter mile from the office is a simple road which passes a few farms and a handful of houses. There are numerous wooded lots along the way. I turned down this road, did a u-turn in a driveway, stopped by some woods, still fully on the road, not on anyone’s property. Key point – NOT on anyone’s property. I stood on the road.

No sooner had I lit my organic American Spirit cigarette when I heard a crashing noise in the woods. I expected to see a deer coming through. Instead, here came a man bounding through the brush in nothing but cut-off shorts and boots. He was running full speed through branches and weeds. And he did not slow down until he ran around the back of my car and straight up in my face.

“CAN I HELP YOU WITH SOMETHING?” he asked in what to me would be categorized as a deranged way. With a hint of menace.

Taking a step closer and leaning towards me, he sneered, “SO YOU WERE JUST LEAVING THEN?”

“NOT HERE!!!!!” inching closer, flexing his chest and clenching his fists.

I thought, this dude is gonna hit me! Here it comes. I am going to get beaten to hell on this country road with no witnesses before I even get to take my second drag. The surgeon general’s warning is right. Smoking kills! It looked like my time was up.

Despite the queasy nervousness in my belly and that elementary school I’m-gonna-piss-my-pants quivering in my groin, I somehow managed to calmly, maybe even cheerily, say, “Okay, man, no problem. Sure. I’ll go somewhere else.” I wanted to pull off one of those scenes like John Cusack, Jack Black, and Todd Louiso in “High Fidelity.” If only I had two other guys with me, and a phone to smash this guy in the mouth, and an air conditioner to pull out of a window and drop on his face. (No, don’t even tell me you didn’t see that movie.)

I bounced into my car and pulled away, smoke in my interior, smoke on my clothes. Damn it.

I drove over to a parking lot off of the main road. I stood by my car wondering about the incident and still attempting get a hold of my groin. (Take that as you like.)

What the hell is that in the weeds?

An abandoned toilet! A toilet?

I raised my hands to the sky, looking up to ask, “What the hell is going on in this world?” Only to spot a pair of old boots hanging from a branch above my head. 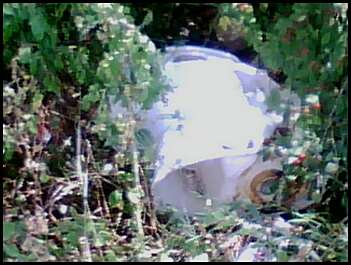 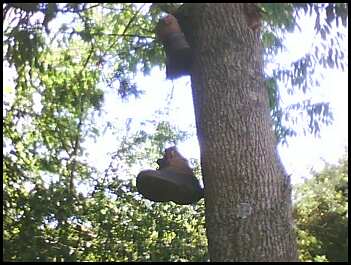 Of course, the way my mind works, I instantly imagined some guy exploding off that toilet in the weeds and losing his boots as he shot through the sky. It’s every bit as plausible as the guy rocketing through the woods to greet me moments before.