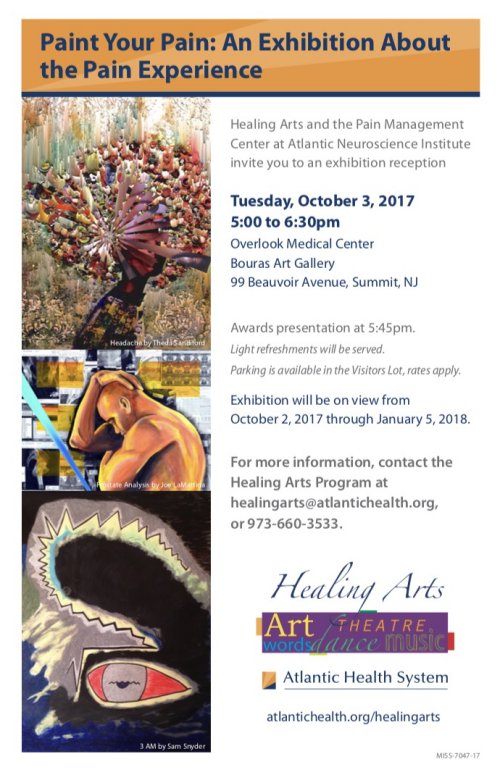 I’m excited to have three paintings included in the “Paint Your Pain” art exhibit presented by the Healing Arts program of Atlantic Health System. The exhibit will be at the Bouras Art Gallery at Overlook Medical Center in Summit, NJ.

This will be the first time any of my work will be exhibited in public. More information on my art can be found at http://www.doodlesam.com.

If you’re in the Summit, NJ area on Tuesday evening, October 2, drop by and say hello!

Sometimes my best laid plans are made void by the arrival of a migraine. When one comes, I always have high intentions of continuing with my day, fulfilling all the to-dos on my to-do list. But over the course of several hours, my motivation and strength to keep going begin to wane.

My migraines always begin with a visual aura. It starts small, a bright tiny speck in my vision. I always doubt its existence when I first notice it. Maybe it’s just a floater or an afterimage from a bright reflection I saw. But once the tiny speck takes the shape of a few jagged lines and begins to shimmer and vibrate, I know my day has been interrupted in truth.

At that point I take my pills. The aura grows, spreading over 75% or more of my vision. My brain starts to get a little fuzzy. Sometimes my words get mixed up. The bright lights in my eyes are a sign of the circuits in my head shorting out.

The pain starts. I feel like puking. The energy of my body begins to fade as if it’s being drained through the soles of my feet into the hard lifeless earth.

By then I begin to give up on my plans for the day. Running and exercise feel like way too much of an effort. At that point I start to think, Maybe I can go for a walk to at least get a little exercise. But before long I usually forego that idea too. Going places, running errands, meeting up with friends, all become too much to undertake. I give up.

Along the way I usually become ravenously hungry, but not for anything healthy! No! I crave PIZZA! Almost always. Sometimes sweet things too. Then all my striving to lose weight by eating right gets completely derailed. I’ve consumed an entire pizza under such conditions. I’ve eaten numerous cakes and cookies. Is it a need for massive amounts of carbohydrates for which my body must have? Or am I eating for the emotional comfort of junk food? When I am in that condition, the answer to that question never matters.

This was my day yesterday. Plans were cancelled. My day went down the tubes. My vitality was sucked out of me. And I filled the void with:

For more thoughts on migraines and to see some of my migraine art check out “Sleep with Migraine, A Still Life” and other posts on my art website, Doodlesam.com.

Don’t Grab the Honey. You’ll be Sorry if You Do.

While preparing images for another gallery of migraine drawings, I came upon one that was inspired by a dream in which I got a migraine. When I woke up, I actually had a migraine going on. (It’s bizarre to open my eyes in the morning and find a migraine aura going on. That always freaks me out a bit when it happens.) As all but a few of my migraine drawings are contained in my journals, I was happy to find the story of the dream along with this drawing. The dream features my grandson, Jordyn, who was 10 at the time. I feel bad about being so mean to him in this dream! Read below. You’ll see what I mean.

I woke up with a migraine today. Here’s the story:

then I had a dream that I was in a grocery store with Jordyn. We needed to find something to make for dinner. While in the store, I started to have a migraine aura. I said to Jordyn, “We gotta hurry up, buddy. I’m getting one of my headaches.” Jordyn went off and I was walking around by myself. I was trying to find Jordyn, went down a few steps and noticed the right side of my vision was mostly gone.

I finally found Jordyn leaning over something. I said, “What are you doing?” He was startled and stood up. He had a bottle of honey in his hands. He was squeezing the honey into a barrely of water that had ham steaks in it. I yelled at him, “What are you doing! We have to get out of here! My head hurts!” I slapped him on the back and grabbed the honey.

Then my hands were all sticky! I was so angry! I put the honey on a shelf. Then I thought about how to get the honey off my hands. I looked around to make sure no one was looking. Then I rinsed my hands off in the barrel with the ham! Ha! Then I said, “Let’s get outta here!”

The alarm went off at 7… and I had an aura going on. It was on the right side of my vision, which is unusual. I usually have it on the left side.

There’s nothing worse than a migraine AND sticky hands! But I guess that’s what I get for being nasty to my own flesh and blood.

(This story is also posted on Doodlesam.com HERE.) 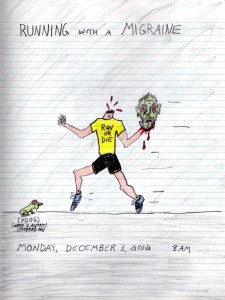 “The best laid schemes of mice and men often go awry.” So said Robert Burns, apparently “to a mouse.”

“The best laid schemes of mice and men often go awry… and sometimes they get absolutely crushed and the universe leaves you feeling like a turd.” So says Sam Snyder to whomever wants to listen, be he vermin or otherwise.

Such crushing happens when a migraine strikes. It makes it extremely difficult to maintain one’s plans when one feels like they can barely put one foot in front of the other. When you can’t move your feet properly, it becomes darn hard to run! This is how my running plans went awry yesterday.

With my new focus on more frequent running, I had plans to run yesterday and a pocketful of motivation to go with them. Even though I woke up at 3:30 AM with a migraine in progress, I still held onto hope that I would power through and run at lunchtime. I worked from home because I had way too much to do after being off for New Years. I thought about taking the day off and lying in bed in my misery. But that usually doesn’t help me when I have a migraine. Usually I can’t sleep. It seems better to work through my misery than to lie in it.

By the time lunch rolled around my pocketful of motivation was greatly diminished, as was my physical energy and my optimism toward life in general. It just wasn’t going to happen.

So, I planned to run at 4 PM when work was done.

At 4 PM there was a giant gaping hole in my pocket of motivation.

At that point I decided it would be torturous to run while feeling so ill. I have done it before. The first time was 3 years ago, as indicated in the picture attached to this article. That was a training run. For a long time, I knew I had to one day run with a migraine to see what happened. Nothing happened. The only difference was that, instead of being a lump of human refuse, I became a sweaty lump of human refuse. It didn’t do any harm. It didn’t do any good. I have also run two 5Ks with a migraine… because why waste my prepaid registration fees? At the first one I won first place in my age group. The other 50 year-olds must have been on crutches or something. I ran the second race because there was pizza served at the end. I would do nearly anything for pizza.

So as to not have my plans completely spoiled yesterday, I decided to walk at 5:30 PM. It was 18 degrees and felt like 4 with the wind. I figured that I felt so bad already, what big deal would it make to add frostbite to my condition? So, I walked a 5K. It didn’t do any harm. It didn’t do any good.

Having gotten a little exercise in, I ordered a pizza for myself. Like I said, I would do nearly anything for pizza, especially when I have a migraine. I don’t know what causes it but when I have a migraine I almost always end up craving pizza. It’s all I could think about on my walk. When I had 15 minutes of walking left, I called in an order for a large pie. The pizza guy said, “Give me about 15 minutes.” I said, “Perfect!” This part of the day went exactly according to plan! I ate 7 slices. No longer was I merely a lump of human refuse. I was a mound of it.

To sum up: My plans were severely altered thanks to a migraine. I did get a little exercise in. Then I promptly obliterated any benefit from said exercise by eating enough pizza for 3 1/2 people. Yes, yes, I did.

Today, I did better with my eating and ended the day with calories to spare. Plus, I ran 4 miles at lunchtime. It was a good run. My energy was a bit on the low side after the migraine. But I got out there and made a good effort of working off one of those slices of pizza.

While the best laid plans of mice and men often go awry, we must remember that this is sometimes because God loves us and wants us to eat more pizza.

Half Marathon Training – “Houston, We Had a Problem”


My day was wrecked by a migraine at 9 AM. It started at the exact moment I walked through the door into work. I kid you not. By the time I walked from the door to my desk, my vision was half distorted already. All day, I thought of how I was going to overcome the situation and run. I survived at work until 1:30, which included an hour long mid-year review discussion with my boss (which left me rather bothered). Then I had to call it quits and go home. I thought, If I sleep a few hours, maybe I’ll have more energy to run later. Nope. First, it was tough to get to sleep because I couldn’t stop thinking about several unfairly negative things my boss had to say. (Is it any wonder I get migraines?) After I did sleep, I awoke as a zombie. (Still not much improved at the time of this writing.) And, well, rather than write more descriptions of this condition, here’s a drawing to depict how I felt. A picture is worth a thousand words. In this case, “barf,” “decay,” “slime,” are a few of the sunny ones that come to mind.