I spent a little time drawing with two of my boys. There is an age difference of 33 years between them. Neither of them was surprised by my antics in this drawing. The older one figured out a long time ago that I wasn’t quite normal. The little one must have heard of my reputation.

The Elephant in the Spare Room

I was going through a box of keepsakes in the spare room and found an enveloped marked, “Daddy Snyder.”

Inside as an elephant from my daughter, Hannah. The elephant must be at least 15 years old. It warmed my heart to find him.

Hannah is a full-grown artist now. She does wonderful work! See her artwork at Hannah Henson Creative. Follow her on Instagram too: @hannahhensoncreative. 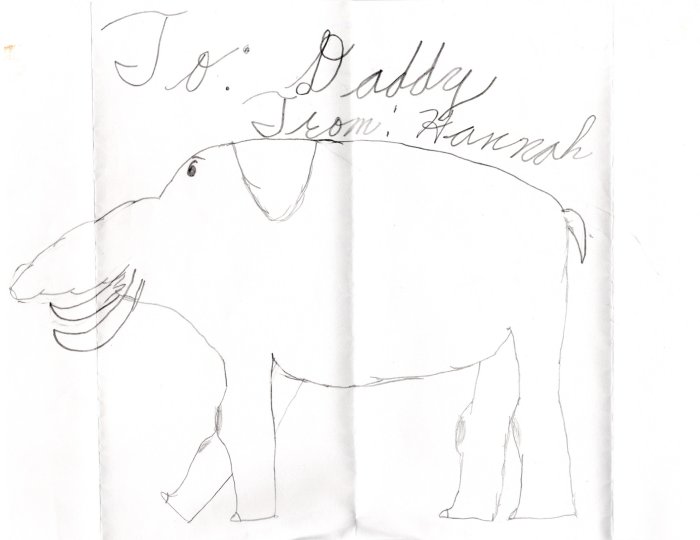 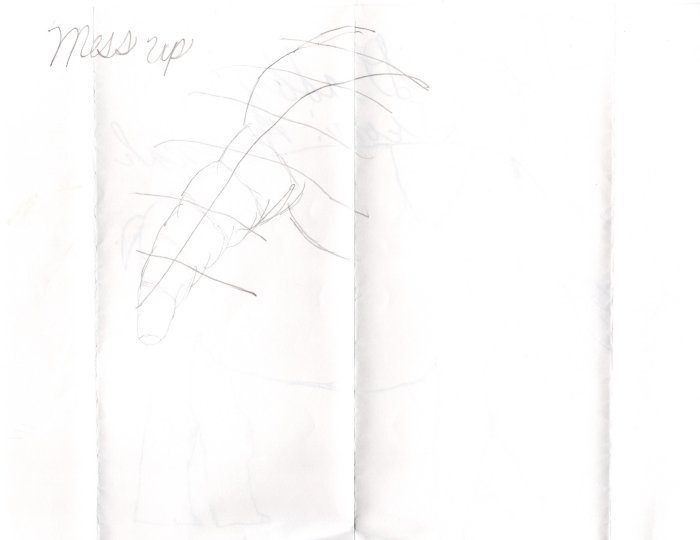 That Time I Went to Yale and Felt So Smart

To be honest, the bronchitis started the night before leaving for Montreal. Despite feeling not completely well, I had a great time.

We flew to Montreal on Friday morning, arriving around 10 AM. The weather was perfect: clear skies and a slight chill in the air. This was just right for walking. Although, our backpacks did get rather weighty after a while. At least it wasn’t blazingly hot.

Hotel check in was not until 3 PM. So, we first headed for the tourist information center. There we purchased three day passes for the museums and the subway (aka – the Metro). The Metro lines were easy to figure out. The stops were announced in French. Not being French-speaking people, we got a chuckle out of the pronunciation of a few of the stops, especially “Pie IX,” which sounded like “peanuts” to us.

After being properly informed as tourists, we hopped on the Metro and went to the Botanical Gardens, which is next to the Olympic Park. It’s a beautiful place! It was a little early in the season for most outdoor flowers. The tulips were beautiful. There were several other flowers blooming in various sections of the outdoor gardens. The indoor gardens were very pretty. There were different greenhouses with different climates. We took a lot of flower photos inside.

The Insecterium at the Botanical Gardens was our next stop. Did you know that there are some insects that are so large they look like they could carry you away? There are some darn ugly bugs in the world! Most of the ones at the Insecterium were dead on display, thankfully. Just seeing them on display was enough to give you the creeps. The moths and butterflies were quite lovely. The beetles and the spiders were the nasty ones.

For dinner Friday night, we went to a Swiss restaurant. We started our meal with cheese fondue. Then we had filet mignon fondue with several dipping sauces. And for dessert… yes! chocolate fondue! Oh man! Soooo good!

On Saturday we went to the Fine Arts Museum. The Canadian arts section was especially interesting. There were several amazing walrus tusk carvings and other stone carvings. Many of the paintings captured the feel of Canada’s wilderness with it’s cold mountain and great northern expanses.

We explored Old Montreal on Saturday afternoon. We were able to find an outdoor cafe to eat lunch before we became overly cranky from walking and hunger. Then we had the best dessert (again). I don’t know if there is a name for this. We had balls of fried dough covered in honey and sprinkled with cinnamon with vanilla ice cream on top. Arissa added chocolate syrup to her’s and I had caramel. We were so stuffed! But I was tempted to eat another one. It was so good that I could probably keep eating it until I got sick all over myself… and not care!

We went to the Collective Soul concert at Metropolis Saturday night. They put on quite a show! Long too! They were much better than when we saw them in Asbury Park last month. The venue was much larger. The crowd in Montreal LOVED the band! After several songs, the applause went on so long and became so loud that the band couldn’t start the next song. All they could do was stand there and accept the crowd’s admiration. A few songs later and they crowd did again. This time they sang their approval. Collective Soul has not been on tour in several years. This kind of reception to their performance must have been so reassuring to them. One of the reasons for the length of time since their last album and tour is that the singer, Ed Roland, had been through a divorce and is now a single father. Since I can relate to that way of life and the struggles that it brings that when the crowd cheered with so much enthusiasm, I felt proud for Ed that he has found a way to get back to playing the music that he loves.

We didn’t have time for much on Sunday. Our flight was scheduled to leave at 2:55 PM. We did manage to tour the Montreal Biodrome though. The Biodrome is also near the Botanical Gardens at the Olympic Park. It consists of several sections representing different climates with live animals. The tour was very interesting. I wish we had more time to linger and watch for some of the more elusive birds. We got great photos of the penguins. That seemed to be the point of highest interest for most people. Everyone laughed as the penguins waddled along the rocks then plunged head first into the water. They look rather clumsy on land, but they are graceful in the water. I got a laugh out of a French-speaking couple sitting on the bench in front of me when one of the penguins, shall we say, “moved his bowels.” The woman rattled off something excitedly in French. Then she looked at her husband and blurted out, “He shit!” I laughed so hard to myself that I almost did!

Going through security at the Montreal airport, I was “selected” for a random search. I was surrounded by four security personnel, all speaking in French and pointing at me and my backpack. Now, it might be confusing when people are speaking a language which you don’t understand and they are speaking about you. But I have to say, it’s not very intimidating when it’s French. I mean, these were security people, responsible for protecting the public from international threats. Speak something tough sounding! Like German or Russian or some Slovak tongue. But then again, I doubt that they considered me much of a security threat as I stood there holding a box of Canadian Maple Cream cookies. I think the women just wanted to look through my luggage and take a peek at my undies!

The flight between Montreal and Newark took just over an hour. That was good as I really wasn’t feeling very well by Sunday afternoon. Arissa and I were both worn out by the time we sat in the plane. We both listened to music and napped on the way home.

I miss Montreal. It is definitely a place to keep on my list of places to visit. So they better keep the fondue fires burning and the security people ready. One day I’m going back!

Arissa and I made a trip to Philadelphia to see a photo exhibit by Zoe Strauss. Zoe lives in Philadelphia. Her photos are primarily of the area in which she lives. They tend to capture life as it is in that section of Philadelphia.

The exhibit was held underneath I-95 at the corner of Front and Miflin Streets. Laminated copies of Zoe’s photos were mounted on the concrete support columns beneath the highway. There were nearly 300 photos. Their true to life quality in an outdoor urban setting added to the overall impact of the exhibit, especially when one reached the far end of the lot and found a few homeless men sleeping along the fence.

Many of Zoe’s photos can be viewed and ordered at www.zoestrauss.com.

Published On: May 15, 2001
(Originally posted on the website Continuum...) (This entry is a letter that was written by my Mom for my grandmother who passed away earlier this year. A brief explanation follows.) DEAR MOM, This is my first Mother's Day without you. It has been four months since your passing. I still think you are here for fleeting seconds at a Continue Reading →