So this is Christmas

I am typically never in the mood for Christmas when the season starts rolling around. Every year I go further and further into December before I start feeling any twinge of interest and even farther to feel any excitement. Not many more years down the road I won’t sense these things until mid-January.

Well, I felt a spark of Christmas life on Sunday. There were two events that struck my flinty heart and made it smolder a bit.

First, there was shopping early in the morning at T J Maxx. Why was I not in church on a Sunday morning? Well, look, don’t judge. The good thing was that my wife and I found Jesus (and Mary and Joseph) at T J Maxx. What made me happiest about this was that the Holy Family turned out to be the perfect gift for dear friends of ours. It felt good to buy this object in order to give it away, just to be able to indicate to our friends that, “Hey, we are happy that you are in our lives.” (Even though one of us might be rather humbuggy.)

The second thing that jazzed me up a bit for this holiday was a Christmas concert at St. Paul’s Church in Clifton, NJ. The lighting of the dozen Christmas trees at the front of the church caused oohs and aahs. I think that’s what got me. I thoroughly enjoyed that concert: operatic singing, youth choir, singer/songwriter, baritone horn and trombone, cabaret style, congregational singing. I teared up a few times.

Here’s one song that I loved. It features our friend, Valerie Bernhardt singing and my wife accompanying on piano.

And here’s a song that just plain makes me happy.

I can’t guarantee that this little spark will turn into a real flame in time for Christmas. But there are still 10 days to go. There’s hope.

For most of my life I had been an on-again/off-again runner. I liked running but never seemed to be able to stick with it. For many years I was a wannabe long distance runner. But as the years increased and my running did not, I found myself overweight, on high blood pressure medicine, and depressed. My favorite pastime by then was lying in bed watching movies and stuffing my face with chips and salsa. Once I fell asleep while eating Ring Dings in bed and woke up to find that I had rolled on one. I had officially become a slob. Oh, and I was smoking half a pack of cigarettes a day. That was 5 1/2 years ago. I was pretty much at the end of my rope with myself at that point.

Coinciding with this dissatisfaction with my physical condition was the happy circumstance of meeting a wonderful lady who would become my wife a few years later. She was/is a very active girl and that motivated me.
I started walking every day. I cut out the Ring Dings (most of them). I cut down my portions. After 4 months, I had lost 20 pounds. That’s when I started running. After another 4 months I had lost another 20 pounds. My doctor took me off the blood pressure medicine. Four years later, my blood pressure is better than it had ever been.

Onward and upward for the future!

Throwback Thursday – “DR. IAN NUTCAKES ON THE PSYCHIATRY OF TIES, CUBICLES AND OTHER ARTISTIC REPRESSIONS” 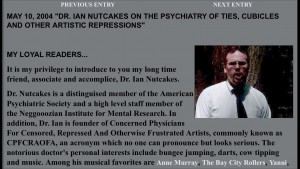 It is my privilege to introduce to you my long time friend, associate and accomplice, Dr. Ian Nutcakes.

Dr. Nutcakes is a distinguised member of the American Psychiatric Society and a high level staff member of the Neggooozian Institute for Mental Research. In addition, Dr. Ian is founder of Concerned Physicians For Censored, Repressed And Otherwise Frustrated Artists, commonly known as CPFCRAOFA, an acronym which no one can pronounce but looks serious.

For this week’s Throwback Thursday, let’s go way back. 11 years back.

(Herein lies proof that I was a nutcase at least as far back as 11 years ago.)

Click here => Heron Flight – May 10, 2004 – “DR. IAN NUTCAKES ON THE PSYCHIATRY OF TIES, CUBICLES AND OTHER ARTISTIC REPRESSIONS”

Once upon a time, in a lifetime faraway, my grandfather owned a diner. From the days of my earliest memories, Pop ran the diner. He rose at 4:30 every morning, without an alarm clock. He started the grills, warmed up the dishwasher, and welcomed the first customers at 6 AM. This was who he was. He made up for it with a daily nap in his downstairs office most afternoons.

For this week’s Throwback Thursday, let’s go eight years back to an old blog post… which will then take us even farther back.

Don’t you love the internet?

I Wish You Could Smell This

I wish you could smell this.

This flower smells so GOOD!

It’s one of several flowers that have bloomed on my jasmine plant over the last few days. I walked into the kitchen and thought, What is that awesome smell? The whole room smelled good! (This may also have been due to the fact that I finally took the garbage out earlier that day.)

Long, long ago, in one of those lifetime-ago periods of my life, back in the last century, actually, a girl that I was seeing gave me a similar plant. I was newly divorced. This girl thought she would liven up my home by filling it with plants. Rubber plants. Aloes. Philodendron. A lot of the typical houseplants. And there was a jasmine plant, which was very popular in the country where she grew up, but called by a different name there. There was much ado about that plant. It was meant to be the queen among all the lesser plants that then occupied my home. I was fine with that because it smelled fantastic! It had a scent that lifted one’s spirits. Beautiful.

An interesting thing about the jasmine flower: it lasts for not more than 24 hours once it blooms. Its fragrance is kept completely secret as the blossom matures. Then when it opens it spreads forth such a scent. It is a gloriously white flower with a soft texture. It is pretty to both the eyes and the nose. But the day after it blooms, its color begins to turn a pale pink. It withers. Falls to the ground. There is no longer any fragrance. It is sheer delight, then gone.

One day, the girl got mad at me. She took back the jasmine plant. She clutched it in her arms and said, “I don’t trust you with this plant. You would probably kill it.” She left. Eventually she faded. I don’t remember her scent.

One day, another day, I came home to find the rest of the houseplants gnawed down to stumps in their pots. Dirt was everywhere. This caused me some consternation as no one had been in the house all day. Later, I discovered what annihilated my plants: A RAT!

There’s really no analogy in the rat part of this story like there is in the jasmine part. Other than that maybe it was a sign that I was living in a real shithole and needed to move. Which I did. Quickly.

Then, one day, another day, a couple of years down the road, I found a plant with pretty white flowers in a garden store. “Jasmine? I once knew you by another name.”

I bought the plant. No one can take it back. That makes it all the more enjoyable.

I wish you could smell it.